… of my self-imposed confinement to quartes began as you might expect on a Sunday with me not leaving the warmth and comfort of my stinking pit until about 11:00.

Mind you, that wasn’t when I awoke. The painkiller that I took last night to ease the pain in my jaw wore off round about 09:00 and that was about that. I’s a good job that I didn’t go to bed until about … errr … 03:00. Had it been any earlier, it would have worn off earlier.

Anyway 11:00 is a good time to be up on a Sunday even if I did spend a couple of hours huddled up underneath the quilt in the warmth. Nothing ever happens on a Sunday anyway, and even less does when I’m stuck in the house.

After the medication and checking my messages (well, some of them anyway) a friend of mine came on line so we had a little chat for a while, which cheered me up somewhat. And then I sat down to pair off the music for the next radio programme – the one that I’ll do tomorrow and which is programmed to go out on … gulp … 18th November.

As you can see, I like to be well ahead.

After lunch (toast and porridge with lots of coffee) I had a listen to the dictaphone to see where I’d been during the night. We were on a sailing ship returning home from the Caribbean or somewhere. There had been shortages of crew for the return, for one reason or another. We noticed something strange happening to a cable. It turned out that there was a saboteur on board. He was arrested and he revealed under pressure the name of a friend so those two were cast overboard. I was still of the opinion that there was a 3rd one. One or two people kept on dying here and there as you would expect. There were a couple of women and an elderly nurse. One of the women was exploring around the ship with me one night, being careful not to awaken anyone, and looking at what we could find. We came across something that was even more confusing, that someone had signed their nickname to an order but they weren’t actually known to be about. This led to an enquiry and in the end some young boy admitted that it was he who had signed the order in this nickname, but this left the question of this other person who at the moment was asleep. We started to have all kinds of grave suspicions about him. The old woman who had been awoken by the noise came in and offered to tell us all recipes so we prepared to hear them and write them down. The man appeared but we hadn’t made up our mind what to do about it. It was a very uncomfortable few minutes while he was here and he was bound to notice the uncomfortableness. I had this foreboding that this whole trip was going to end in disaster somewhere. If he didn’t start a mutiny on his own and kill half the officers, then something else would happen to this ship and he would probably be involved in it and it would all end up turning out like Treasure Island.

Later on I’d flown into the USA for some reason and I’d gone to meet a friend. We ended up having loads of trouble meeting up. eventually it took place in a hotel. He came in but there was no room so he had to crush up on a table with some other people. One thing that I noticed was how easily everyone there broke into conversation with whoever it was they were sitting next to whether they had known them before or not. I hardly talked to anyone there. The question of New Year came up. They were talking about how someone had played a concert on one side of the timeline to celebrate New Year and then dashed over the frontier to do the same on another time zone. I said that people between Spain and Portugal can do that. Someone came up with the name of Dundee and asked whereabouts was such-and-such a Firth which I didn’t recognise at all. She said “yes, where Dundee is”. I said “that’s the Tay”. It didn’t strike with her at all but I had to convince her that it was the Tay. She was saying something about how someone did the same thing there but they had quite a drive afterwards to cross the time zone. I was trying to think where you would cross a time zone by car near Dundee. Someone asked what time it was so I had a look at my watch. It was 09:10, without thinking. Someone else said “yes, 09:10”. It suddenly dawned on me that it must be 03:10 where I come from. They said “you must be tired”.

The conversation petered out after that.

By now I was ready to go and prepare my dough for the loaf that I was going to make today. 500 grammes of flour, several handfuls of sunflower seed, a crushed vitamin C tablet, 8 grammes of salt and 2 packets of yeast. And it actually all went together quite nicely.

While I was waiting for it to rise I came back here and rewrote another page of my stay in Leuven, adding in the photos and the details of the nocturnal rambles too. And it’s no surprise that I’m so exhausted with the distances that I’m covering during the night.

Back in the kitchen I switched on the oven to warm up and while it was heating I rolled out the pizza dough that I’d taken out of the freezer at lunchtime and put it in the greased tray.

When that was done I put it on one side to proof and stuck the bread in the oven to bake seeing as the oven was now hot enough. And while all that was going on I made myself a mug of instant hot chocolate and came to sit down for a rest. 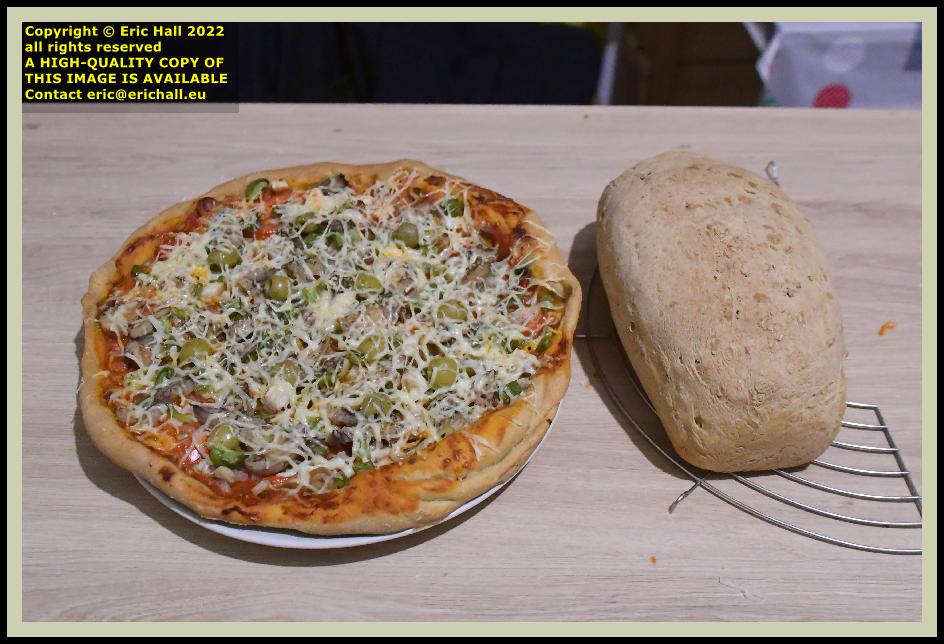 After about an hour or so I went and assembled my pizza and I finished that just as the bread was done. Perfect timing, that was! And so the pizza went into the oven to bake.

Here are the finished products too. Don’t they look nice? And the pizza tasted nice too, even though I had to make do with tinned mushrooms. They aren’t the same as fresh mushrooms, not by a long way.

Now that it’s eaten and all washed up, I can finish my journal entry and go to bed. There’s an early start in the morning for me to attack my radio programme so I need to be at my best.

Not that that’s ever likely to happen these days, of course. But only 2 more days of my house arrest and then on Wednesday I can hit the streets. That will remind me to ring up to cancel the nurse and the physiotherapy. I’m sure that they don’t want whatever it is that I have.

And I hope that the little improvement with my teeth continues too. As the old saying goes, “the teeth in the top are fine but the ones in my bottom are hurting terribly”