… about today, the better because it’s been one of those days that’s best forgotten.

In fact, it all went wrong before it even started, if you know what I mean. The alarm went off as usual at 07:30 and the next thing that I remember, it was 08:03. Yes, for the first time in ages, I’d gone back to sleep after the alarm. Definitely getting back into old habits.

So it was rather a rush this morning to have my medication and then have a shower and clean-up before dashing out to the shops.

09:11 I’d set out, and at 09:58 I was back in the house. Mind you, it was hardly a surprise because there was nothing whatever going on anywhere. It was a wet, grey, dark, depressing morning, the ideal day to match my mood.

Back here I dictated the dictaphone notes from last night. And I was rather puzzled by one sound-file that ran for 57 minutes. “That must have been some voyage” I mused, only to find that it was 00:34 of me talking and the remaining 56:26 of me snoring. I’d drifted off back to sleep with the machine still running.

And apologies to Percy Penguin. She used to complain about me snoring during the night and I always denied it. Well …

Meanwhile, back at the ran … errr … apartment we’d come back on a ferry from somewhere in Europe. When we readhed the pier where we could disembark there were thousand upon thousand of us. We had to walk the length of this pier to reach the ferry terminal. Formerly there had been a train service between the ferry and the terminal. You could still see the railway station and the lines and an odd steam-train or two were going past crowded with people. We walked, and reached a T-junction where we had to turn left and ended up in the ferry terminal, suitcases, everything, hordes and thousands of people. I don’t know where it went from this but a little later there was an announcement on the radio that thousands of people were still stranded at the ferry terminal after 2 days. It looked as if we’d been there and there was no way for us to move on at the moment. Someone said something that he had arranged for a nurse to come to look after the disabled people so that their carers could have rest. It was all just total and utter chaos.

Also last night I was with one of my friends from Montreal for a while. We arranged to meet at some other time. She was living in Russia at the time so she suggested we meet and what I thought was today. I asked her where we would meet – I assumed that it would be half-way between the two -and she mentioned the name of a hotel somewhere in Kiev. I had a look on a map on the internet and found the hotel. It wasn’t too far from the railway station and in fact I’d driven past there once with her and she’d pointed it out to me. I wanted to know what time we were meeting so I rang her on her mobile number but had a recorded message something like “please don’t wake my dad, please don’t wake my dad”. I wondered what was happening because that was a long way to go, all the way to Kiev on the train from Brussels and not be met or not be picked up by anyone. I wanted some kind of more definite arrangements but she wasn’t answering her ‘phone.

As well as that I was out in Caliburn last night looking for the place where he would be MoT’d. It was a strange drive in some kind of strange village or town and then out into the countryside where I kept on being surrounded by sheep and i’m not really sure about that.

And just for a change I managed to save the text file without deleting it.

What else I’ve been doing today is to finish off that sound file that I had to re-edit. It wasn’t as easy as it might have been either because there was a lot of “bleeding over” between the channels so I had to be careful how I edited it and some of the stuff that I would have liked to have kept ended up having to go.

But at least it sounds more like something that it ought to do.

Going out for my afternoon walk wasn’t as easy as it ought to have been either.

When I went into the living room to gather up my stuff as I would usually do at the usual time, it was raining like rain that I had never seen and was as black as the ace of spades outside. There was no possibility of going for a walk in any of that. 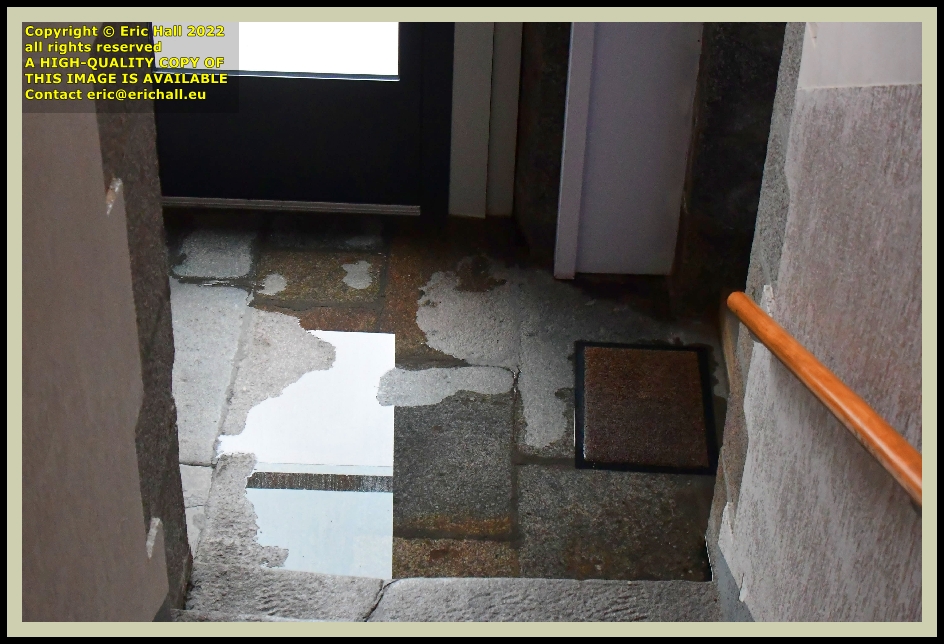 About half an hour later it eased off so I decided to make a run – well, perhaps a crawl – for it.

And this is what has happened in the building. The rain has come down with so much force and with the wind being so strong, it’s blown all of the water underneath the front door and we’ve had a mini-flood on the ground floor. 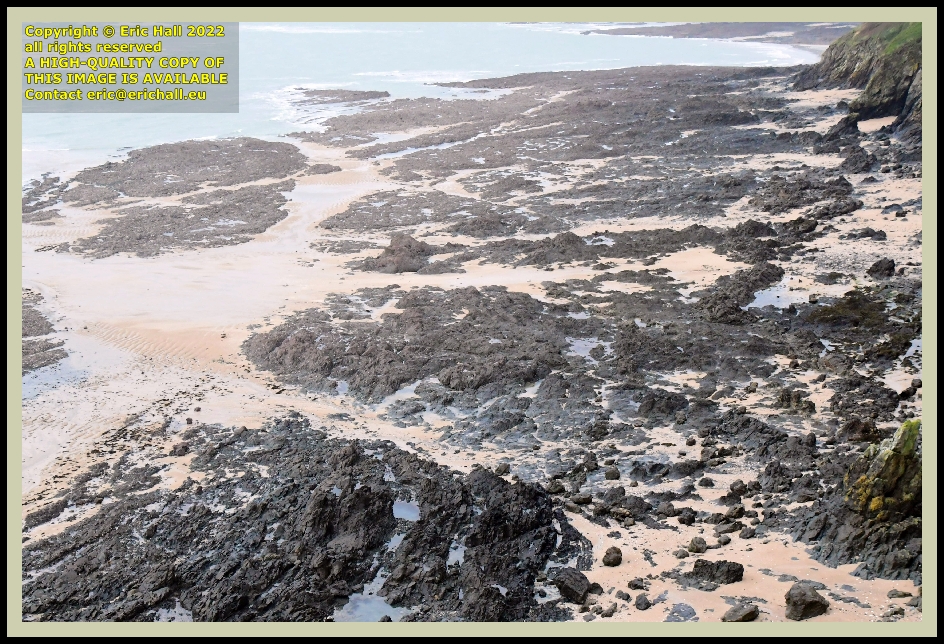 Once I’d finally negotiated the entrance to the building I could go outside and see what was going on.

As I expected, the answer was “nothing at all”. There wasn’t a soul down on the beach which is no surprise given the weather that we had just had. Mind you, it was probably drier to actually go and sit in the sea.

With nothing else of any kind of note whatever happening, I pushed off towards the headland. The quicker I start, the quicker I finish. 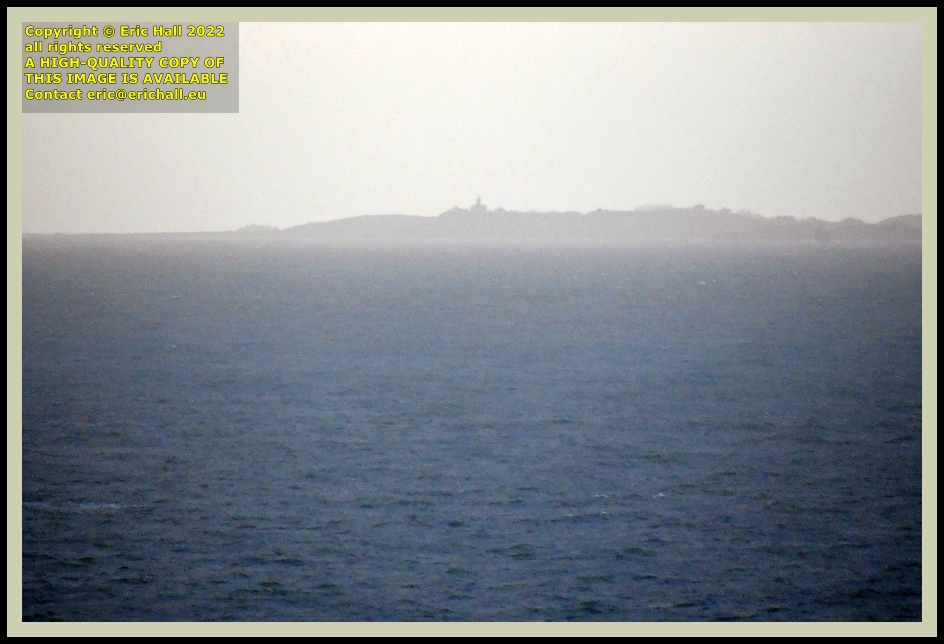 While I was out there looking down onto the beach, I was also having a look around out at sea.

Not that I could see very much out there. It was rather like yesterday in that respect. There was another rainstorm circulating out there in the bay that was making life interesting for that small boat that was racing away from it towards the mainland.

Seeing the rainstorm was the cue for me to put my skates on. The wind was blowing it in my direction. I’d been caught in that downpour yesterday and I didn’t fancy another one. The sooner I return home the better 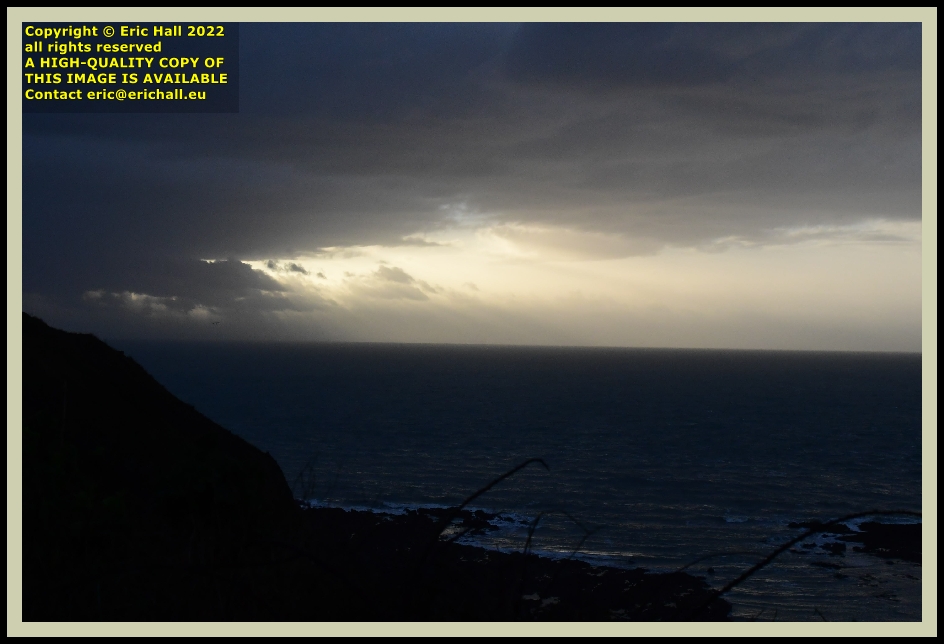 However, as I walked on down the path, all on my tod, the sun suddenly and rather dramatically came out over the Brittany coast.

It looked pretty good in this photo but it became even better a little later when the heavy, dark cloud had moved completely away and was shining over the sea.

But I wasn’t to be lulled into a false sense of security by any of this. There might be sunshine over there but there was none of that here and the rainstorm was coming closer and closer. 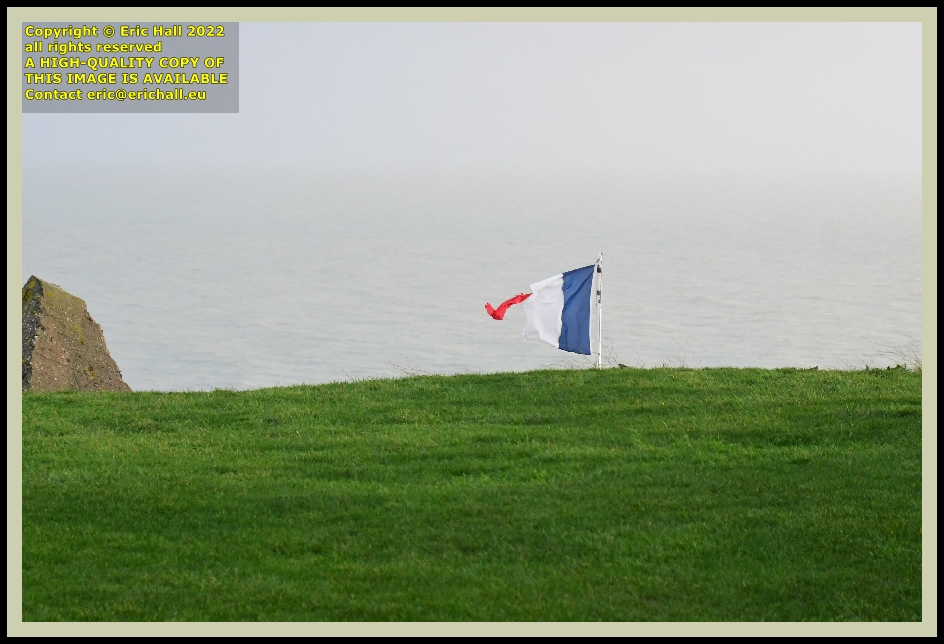 In fact, the wind was blowing quite strongly, although not as strongly as it had done when we had had the rainstorm. And you can see what damage the wind has been doing, because it’s shredded the French flag that flies above the monument to the departed seafarers.

And as you might expect, there was no-one else apart from me admiring it. Not even anyone down on the bench by the cabanon vauban, and that’s not a surprise to anyone at all. 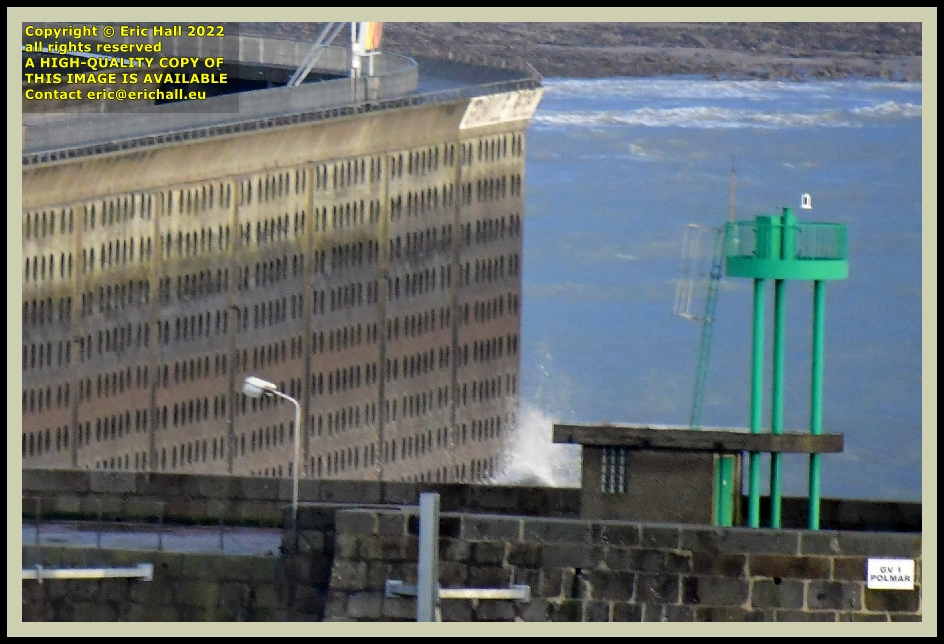 So with nothing happening in the bay, I headed off down the path on the other side of the headland towards the port.

There was quite a wind and a turbulent sea but with the tide being well-out there were no waves breaking on the sea today. However, over on the wall that protects the port de plaisance we had some waves breaking there.

That’s the first time that I recall seeing the waves there. The wind must be blowing on the correct direction for that to happen. It’s probably quite a rare phenomenon.

Meanwhile, in other news, there was still Gerlean and Joly France in the chantier naval and the ferry terminal, but you are probably fed up of seeing them. 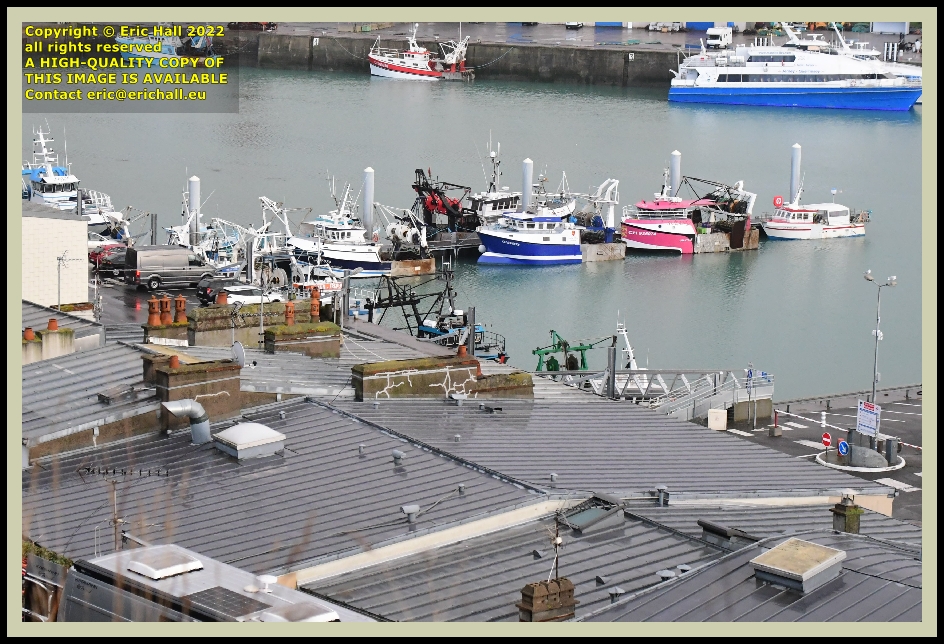 In the inner port, we had most of the trawlers tied up. They haven’t gone out today.

They must be having a weekend off, or else the weather is too turbulent for even them to put out to sea this afternoon.

And so I made it back home where I was finally able to have my hot coffee. And then I sat down to pair of the music for the radio programme that I’ll be preparing on Monday but to my shame I fell asleep in the middle of doing it.

Not just for 5 or 10 minutes either but for well over an hour. A really deep sleep as well, the type that I haven’t had for several months. And that depressed me more than just about anything else.

When I awoke, the storm was back. And in spades too. A howling gale with driving rain. I’m glad that I went out when I did otherwise I would never have made it.

Tea tonight was a stuffed pepper with rice, and now I’m off to bed. Although I’m not sure how I’ll sleep with the wind blowing tin cans around outside and the fact that I had such a good sleep this afternoon.

But it’s Sunday tomorrow and I’m having a lie-in. Rather like the CATALOGUE PRINCESS, APPRENTICE SEDUCTRESS, I seem to be spending most of my time praying “for endless Sundays” instead of performing ” to scattered shadows on the shattered cobbled aisles” of the streets of the old walled city at the back here.

Anyway, more of the same tomorrow.