… that I started to write up my notes earlier this afternoon because the last thing that I was planning to do was to be thinking about eating my evening meal at 22:30 this evening. But there you are.

When the alarm went off it took me quite a while to find the energy and the enthusiasm to struggle to my feet. Things are really difficult right now and I’ve no idea why because if anything I’m actually in better shape physically than I was a couple of months ago.

After the medication and having checked my mails, I decided once I’d recovered my will to live to attack the outstanding dictaphone notes. And eventually, after many vicissitudes, they are now on line.

Having done that, I could then turn my attention to last night’s notes. Sherlock Holmes had been out on his travels last night. There had been some kind of party going on. Someone there had stolen a suitcase full of valuable clothing and Sherlock Holmes was on the trail. He tracked it down to a horse-drawn bus driver who was outside. A big, unruly bloke but Holmes managed to overpower him and hand him over to the Police. The guy was pleading to be let go. When they wanted to find out why he said that there was something urgent that he really must do before midnight. He promised everything he could if he could do it. Anyway they took him back towards the place where this party had taken place. As they got to the door people started coming out. For some reason he violently attacked two of them, a man and a woman. It turned out that they were the people in charge of the organisation for stealing things and he was just their handyman. They were prepared to let him rot in prison which he wasn’t going to allow. Of course with this party finishing at midnight he wanted to be there when they came out so that he could stop them.

Later on last night we were at school. There was something happening, some kind of problem. One of the girl pupils was interviewing a pile of other people. She had us in a room and was letting us out one by one to ask us questions. Eventually it was my turn. She asked me about how things were. I replied that I was really busy. She asked “do you think that you make all of your own problems”. I replied “yes, I do” (and I was dead right there). She asked me about the things that I did so I told her. Someone said “you need someone to help you, don’t you?” to which I turned to this person and said “oh yes but I’ve asked her but she doesn’t seem to be all that keen” – meaning the interviewer girl. She said “I don’t recall you asking me”. I replied “in that case, what are you doing on Saturday? Would you like to go to the pictures?”. She asked what was on. “What are we going to watch? What are we going to see?”. I replied “it doesn’t really matter, does it? Knowing my luck it will be ‘Little Women’, something like that”. To my surprise she answered “yes, OK”. When she had finished what she was doing I took her down to the canteen, sat her down at a table and went to fetch some coffee”. They had some vegan cake. There was some discussion about one vegan cake which I knew that she liked. In the end it turned out that it wasn’t that one at all so I had to make the assistant walk all the way back to the end of the queue to pick up a slice of the other vegan cake, the one that I had so we had two slices of vegan cake and two coffees.

But this makes a real change, doesn’t it? I finally get the girl after all these years. It reminded me of the time the English teacher set a task for his pupils to write an essay including the words “chaste” and “by helicopter”. One boy wrote“The boy chaste the girl and by helicopter” and that’s exactly how I was feeling last night.

The only disappointment is that I when I awoke I found that I didn’t know who she was.

The dictaphone took me all the way up to midday, although there were several interruptions.

Firstly there was giving the soft fruit mix several stirs about to keep the orange and vanilla essence mix percolating into the fruit. And then there was of course breakfast.

There was a phone call too. Caliburn’s winter tyres have arrived and when could I go and have them fitted? “How about 14:00 this afternoon?”

And so at midday when I finished my notes I went and had a hot shower. And the drop in weight of 1.2 kg over the weekend wasn’t a false reading because it showed the same reading today and that’s impressive.

Since I’ve been more careful about what I’ve been eating I’ve lost almost 4kg.

After lunch I went outside to Caliburn. And it was a struggle even to walk across the car park with the howling gale that was blowing up a storm outside. It was a case of “one step forward, two steps back” to reach him.

At 14:00 when the garage reopened I had been outside for almost 10 minutes waiting. And while they were changing his front tyres I had to wait again – until 15:30. I’ve no idea why it took them so long to change two tyres. usually it’s a 10-minute job. They didn’t even offer me a free coffee while I was waiting.

And I was right – they chose to fit the tyres to his front, unpainted wheels rather than the two in the van that I had painted the other day.

They’d taken so long to fit the tyres that the rest of the afternoon was wasted. I went to LeClerc for a few bits and pieces (where I finally found some glacé cherries), stopped at the parcels place to pick up the parcel of Caliburn’s bits and pieces and then came home – struggling across the car park with my shopping – the only thing that was stopping me being blown across the car park and into the Baie de Mont St Michel.

Not even time for any photos, and even if I had, it wasn’t safe to be out on the clifftop in this wind.

With my hot coffee I did something that I’ve been meaning to do for ages and had a good shuffle round of the music. It’s becoming rather stale with the same groups seemingly stuck in the same cycle so I shook it all up.

While I was doing that I also relegated a few groups out into the “miscellaneous” folder as I’ve long-since exhausted the possibilities of what they could bring.

Laurent came round for me at 19:15 and we set off for this “fish and films” festival where we met up with a few of our other radio staff members who were covering it. And I was introduced to someone who wanted to be interviewed for my radio project, so we made the necessary arrangements for later in the month. 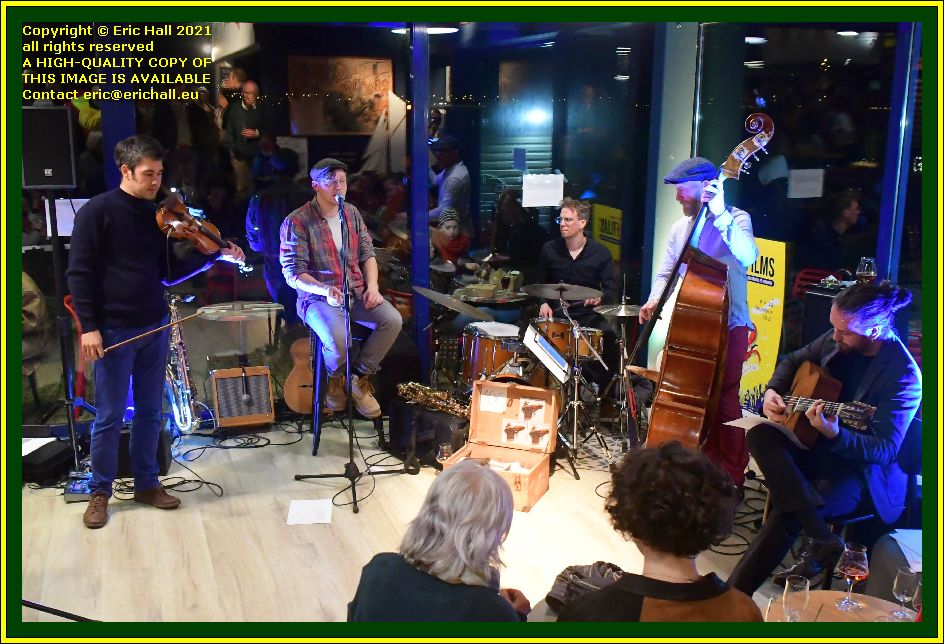 The festival itself consists of a series of short films that are shown in various localities all over town.

We were actually attending the opening party held at the local yacht club. There was a local jazz band (whom I have met before one afternoon on the headland at the Pointe du Roc) and they were playing a series of jazz standards that feature in several of the films.

But it was a strange festival. To celebrate the “fish and films” they had a “fish and chips” van in the car park who ran out of fish after just an hour. And in a fishing port too! You couldn’t make that up.

But one of our friends shall forever be known as “Chief Petty Officer Pertwee” for inviting us to a meal of “fish and chips” (or just chips in my case) so we waited in the queue at the van for over half an hour only to find out that he had no cash and the fryer didn’t accept cards.

It was just like a scene from “The Navy Lark” and the “Fish and Chip Ship” episode.

By the time Laurent brought me home my stomach was thinking that my throat had been cut so I made a quick dish of pasta and veg tossed in olive oil with grated vegan cheese.

So having written my notes I’m off to bed for hopefully a good night’s sleep. We’re radioing again in town tomorrow night so I want to be on top form. And I’ll miss my football again at the Stade Louis Dior, won’t I?