… anything like as much today as I had wanted to. It’s been a story of continued interruptions.

Well, actually, it hasn’t. There’s only been one unexpected interruption, and that was Rosemary ringing me for one of our marathon chats in the middle of the afternoon. and so where the rest of the time went, I really don’t know but it certainly went somewhere.

For a change I had a reasonable night’s sleep – or, at least I think I did, but I really can’t remember. TI was doing a disco at a party last night. The party was for some local guy and the more I delved into this the more he was an out-and-out crook involved in many activities but he was licensee of the Three Pigeons in Nantwich but had put a tenant in. He was up to all kinds of no good. People had asked me to make sure that some way or another I was able to talk about him and his businesses and I could bring them to everyone’s attention somehow. I thought that that wouldn’t be a problem. I was looking through some photographs of the area and found that the house across the road had two security cameras pointing this way about what was going on at the party. My aim was to have everyone start dancing, making lots of noise, draw their attention to the security cameras and have them do all kinds of silly acts to be picked up on the camera. That would be a really good way to start and I could carry on from there.

Later on I was driving the taxis. There was Nerina and my father, that girl Karen and her boyfriend and a few other people. We were trying to organise some kind of rota for Nerina and I to go away. We had a few people to come in to drive, not very many. We reckoned that it would work if everyone wanted to make it work. My father said that he needed to go and someone else was going but they would be back later so they went off. We reminded them about Peter in Winsford who could drive. There was a taxi job at 09:00. I thought that I’d get the beige Cortina saloon (UOB) ready. I hoped that it would start, everything. I’d get ready to do this job at 09:00 in case no-one turned up. I looked out of the window and the brown Cortina was still there, so was the other one and all the tools were out. had they driven off and left everything behind like that? I went out and there had been some kind of problem with the car that had affected some girl who had been walking past. They were busy talking to her and her boyfriend to make sure that everything was OK. Then I had to find a bed. I knew that a bed was upstairs somewhere so I went with this guy who was staying behind for a while and searched the bedrooms. In the end we found it underneath my mattress that was on the floor. I thought that this is going to be really uncomfortable to sleep when they take away the bed that’s underneath my mattress. I was amazed at just how dirty the place was. There was a big hole in the floor where a floorboard was missing and you could see all the way down into the living room below. I thought that this place was unbelievably dirty and untidy.
There was something else about my youngest sister playing with her dolls but I awoke almost as soon as this started.

First thing this morning after the medication and checking my mails and messages, I cracked on to finish off the journal entry from yesterday. In case you hadn’t noticed, I fell asleep in the middle of writing it up. I’d had a hard day yesterday too.

When I’d finished I sat down to write up my notes from the Welsh lessons from last week and from the weekend, and then to prepare for this weeks. And unfortunately I ran out of time so I went in only half-prepared.

That proved to be my downfall too. Most of the lesson went quite well but I ended up in a Zoom Room with the tutor where I forgot the word for “fifteen” … “it’s undeg pump” – ed.

After a late lunch I went outside and spent an hour or so cleaning, wire-brushing and rustproofing the two wheels that are in the back of Caliburn. When they are dry, I’ll put the first coat on and then the second one on Thursday afternoon ready for the new tyres on Friday.

Back here Rosemary phoned me just as I was sitting down with my coffee and we had a lengthy chat as usual. 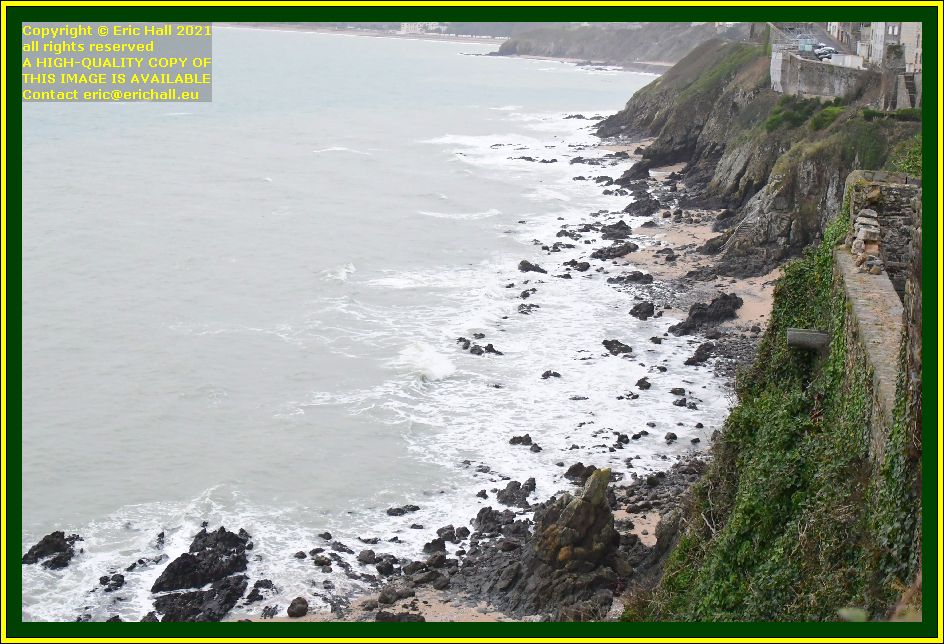 Eventually, when I managed to make it outside I went over to have a look at the beach.

And today, there wasn’t any beach at which I could look. The tide is now almost all the way in so that was that as that as far as the beach went. There wasn’t anyone down there at all which is no surprise.

There wasn’t anyone about out at sea either. And that’s despite the tide being well in. That’s the time that you would expect all of the boats to be heading for home in order to be in before the harbour gates close. 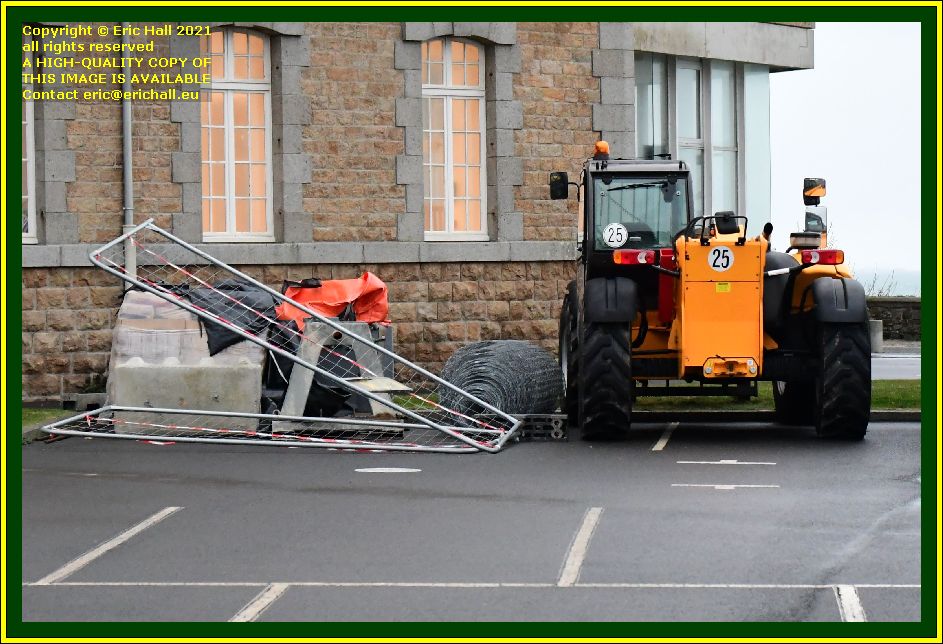 While I was out there on the car park I went over to have a look at the workmen’s compound which was blown all the way across the car park in the storm.

By the looks of things they’ve been out collecting the various parts of the compound from around the place and grouped them all together where they used to be. They haven’t reassembled it as yet but I suppose that that’s a job for another time.

There wasn’t anyone else out there except me this afternoon so I could go for a walk in peace and quiet without having to worry about anyone else and whatever infection they might be carrying around with them. 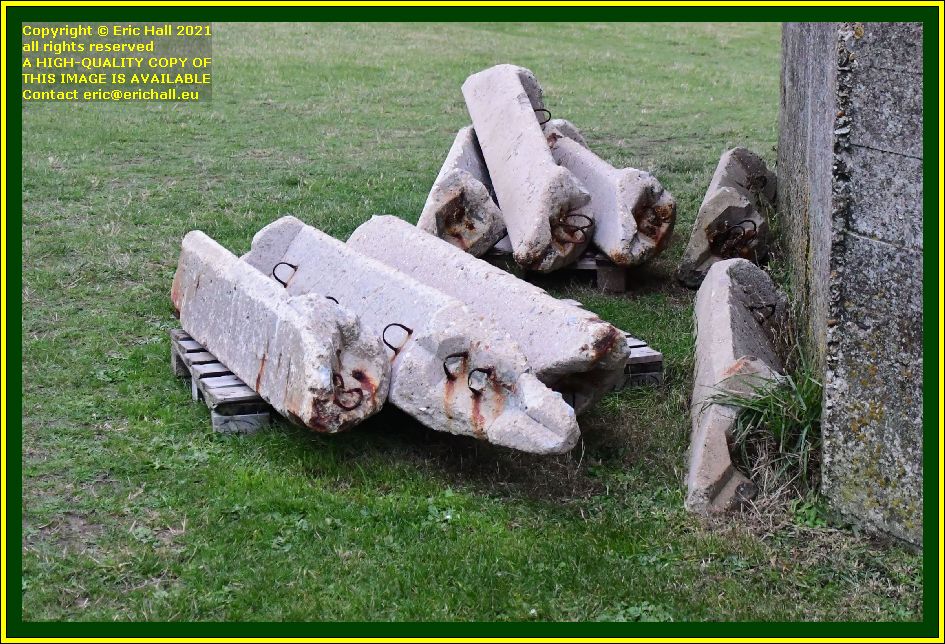 Round on the lawn at the end of the headland there’s a pile of old concrete pillars that they have collected from somewhere.

No matter how strong the storm was, I don’t think that it’s caused this kind of damage. By the looks of things these pillars haven’t been outside in the weather so I wonder if they have managed to fight their way into another one of the old bunkers and pulled them out.

Across the car park I went, down to the end of the headland. There was nothing going on out at sea today and there was no-one down on the bench at the cabanon vauban either, so I pushed on along the path. 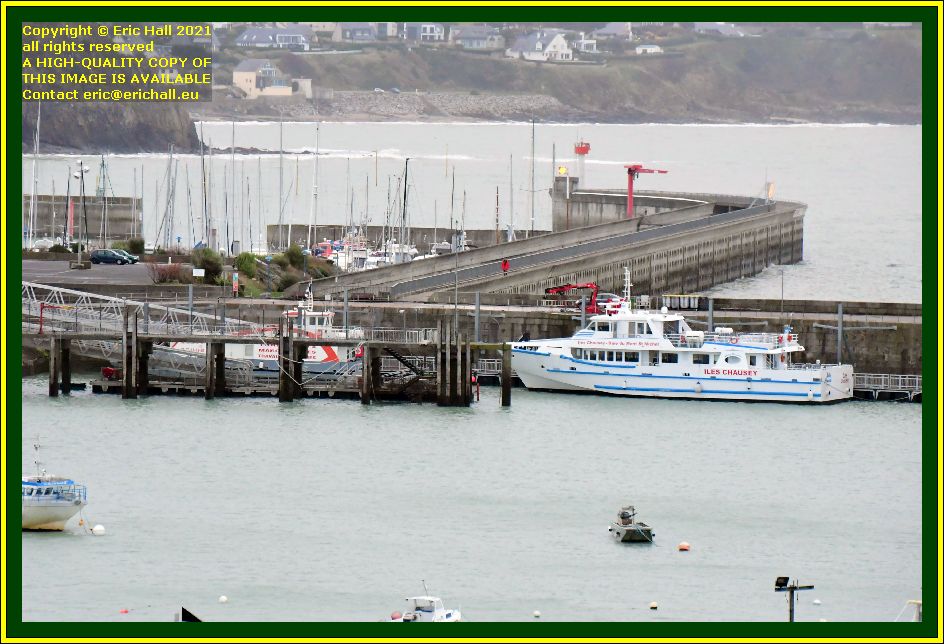 There was no change in situation at the chantier naval so I had a look over at the ferry terminal.

Over there right at the front of the queue is Chausiaise, the little freighter that runs out to the Ile de Chausey, and behind her is one of the Joly France ferries. There’s no step in the stern so she must be the older one of the two boats.

That was about everything that was going on out there this afternoon so I came on home for a coffee and to finally make a start on some work – not that I did very much this afternoon. For some reason I was feeling quite exhausted.

Tea tonight was veggie balls with pasta and veg, and then I reorganised the freezer to make room for the curries that I made yesterday. The freezer is pretty much over-full. I should really have bought a larger freezer, but I would have filled it with other stuff instead so it wouldn’t make any difference.

So now I’m off to bed. I’m radioing tomorrow – going to interview a pile of elves. I have all of the exciting jobs, haven’t I?