… much better night, in that I actually managed to go to sleep.

Mind you, it was rather late when I went to bed. I was downloading something off the internet that took far, far longer than I expected and I ended up having to loiter around until it finished. I didn’t want to abandon the proceedings half-way through as I’d probably forget what I was doing.

There was nevertheless plenty of time for me to go for a wander around during the night. I was round at someone’s house. Zero was there with her father. He had a Volvo but an indicator was out and he couldn’t buy a bulb for it. I had a look at the list of bulbs and it was a current bulb so there was no reason why he couldn’t. We tried a couple of places but couldn’t get one. In the end even though I was going to be late for my bus back from Wheelock I practised by trying to wedge some kind of bulb in somehow. To my surprise it actually worked. I had to get all of my things together and when I went to open the car to take my bag out this large dog in the back tried to come out. I had to lecture this dog firmly to stay put to prepare all my things. I had to go down to the end of the road to catch the bus but it was late now. I has hoping that he would offer to run me back to Crewe and if he did would he bring Zero with him? That’s a few times now just recently that she’s put in an appearance during the night and I wonder why.

Some time later I was with some guy in a block of flats near the airport watching planes take off, chatting about the aeroplanes. Someone was saying that the last flying Caravelle goes over late at night from here. Of course I knew it and had been out to see it a couple of times at night. Just at that moment a light aeroplane flew past, a tiny thing. He came in to land but his approach was so steep. The guy said “he clipped the top of my balcony the other week doing this”. As he came into tland on the runway he was miles short because of his steep approach and hit a red and white Austin 1100 and was turned upside-down on his top wing. I leant over the balcony to look. The driver of this car ran over and went to look at the aeroplane. I shouted down “is everything OK?”. He shouted “no, phone for an ambulance. I picked up the phone and went to dial 999. By this time there were crowds of people all around this. I couldn’t hear a thing. They were all crowding me, all trying to find out what was happening. I was dialling 999 and I couldn’t hear anyone on the phone because of the noise. I had to push people out of the way and have them keep quiet. It was like a nightmare.

Leaving the bed at 07:30 was something of a struggle after all of this. I’ve felt much better even after 4 hours sleep than I did last night after 6.5 hours sleep.

After the medication I Had a look at my mails and messages and then set about revising my Welsh from last week (once I found my paper with the notes on it) and preparing the lesson for today but regrettably, I … errr … dozed off for 10 minutes instead.

The lesson itself passed quite well and I even managed not to fall asleep either. But regrettably I finished my last fruit bun. I shall have to make some more on Sunday after I return.

After lunch I had a few things to do which resulted in uncovering yet another batch of image files that I had overlooked. Undoubtedly all duplicates because they had been on a portable disk drive so I must have done a back-up at some point a long time ago.

Well, not all that long ago because there was almost … errr … 450GB of them. But moving them over to where I can merge them in had created all that space on my back-up drive which probably means that i’ll be able to do another back-up one of these days.

And if I keep on uncovering files like this, I’ll soon end up with a new slimline version of my computer and all of its assorted drives. 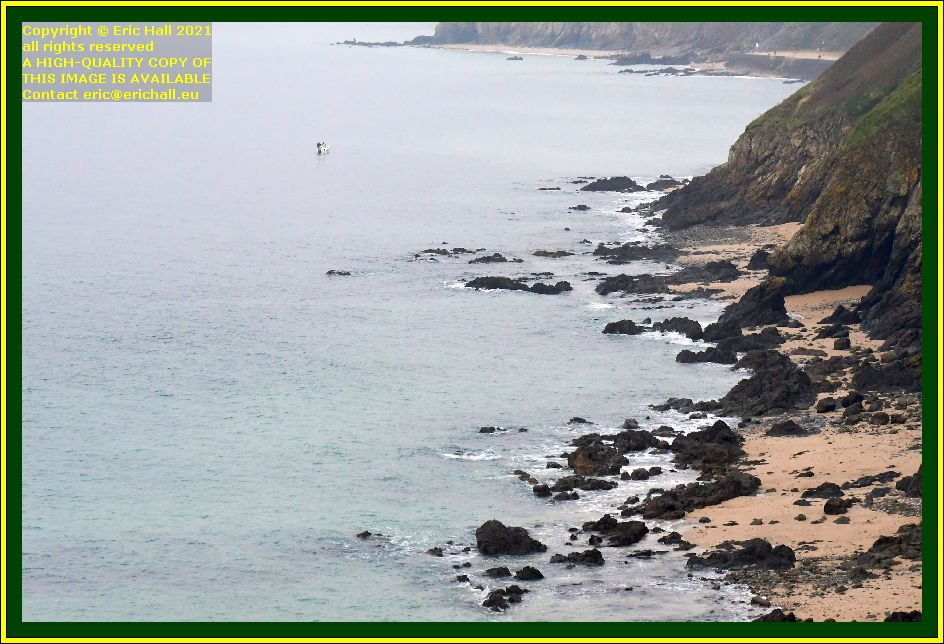 As usual there was the afternoon walk around the headland to clear out all of the cobwebs.

At the end of the car park I could look down onto the beach and see what was happening down below.

And the answer was “not a lot” because 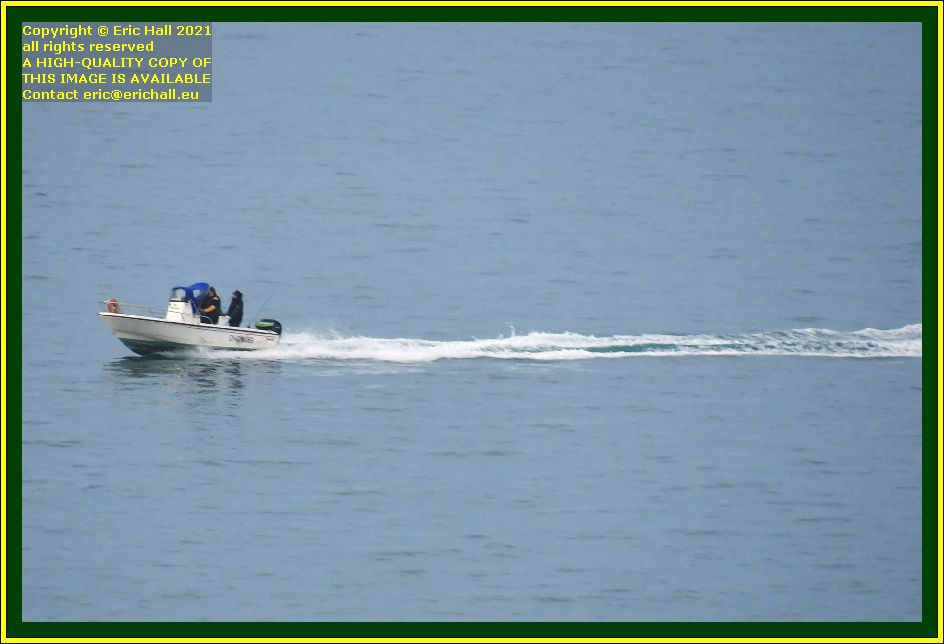 If you had a close look at the previous photo you would have seen a speedboat of some type or other over to the left.

But this isn’t it. There were three or four of them out there and this was one of the other ones that went roaring past where I was standing.

Judging by the looks of things, they were fishermen. They had all of their gear in the rear, including their fishing rods in the upright position.

Why they would need a boat like this and why they would want to move at this speed I really don’t know because this is the kind of thing that would drive away all of the fish for miles around. 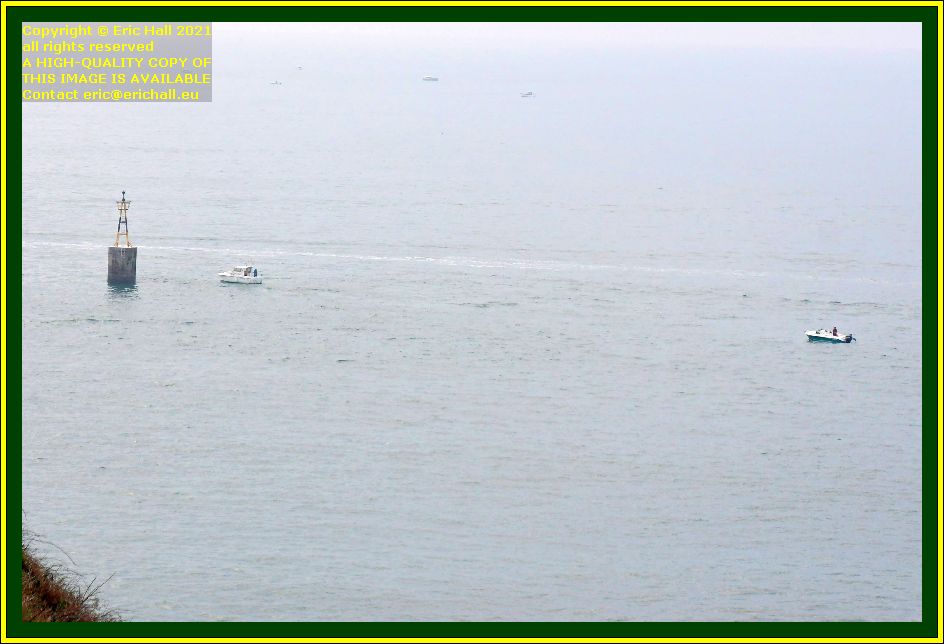 There was a cabin cruiser out there too, anchored out by the marker buoy that se saw the other day.

One of the speedboats came along to join it, something that must have upset the fishermen, if that’s who they were, in the cabin cruiser, when the speedboat turned up at full speed.

There were several other boats in the distance too but I couldn’t see who they were or what they were doing. There was quite a sea-fog today rolling in with the wind that was obscuring almost everything that’s out there. 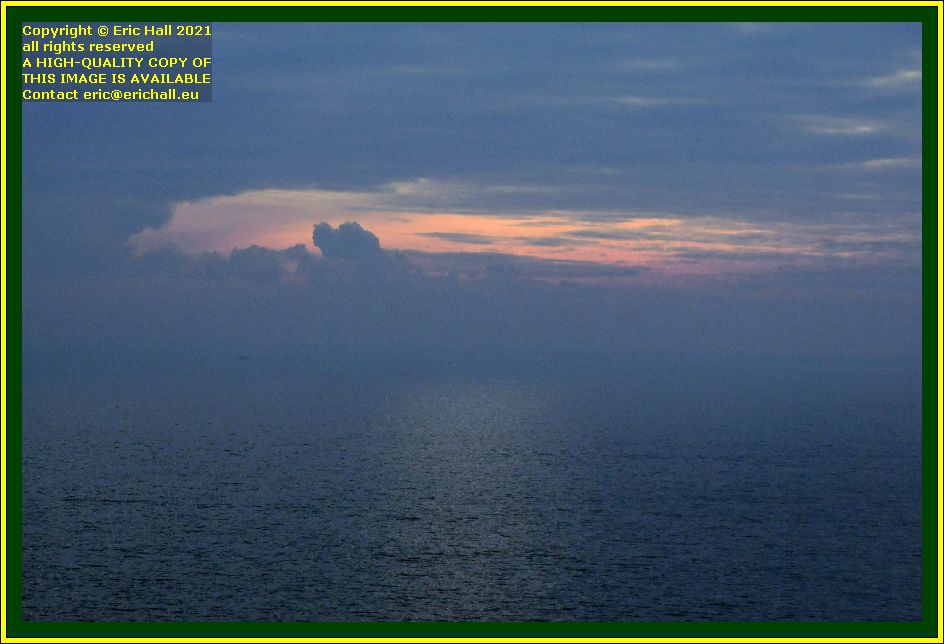 Further on along the path towards the lighthouse I could see the sky doing some interesting things out towards the Brittany coast.

When I arrived at the end of the headland I could see that the mist and cloud had come right down to sea level and it was not possible to see anything at all out there.

But there was another nice gap in the clouds and although the setting sun wasn’t shining through it today, someone was having a lovely evening sunset out there on the other side of the clouds.

Of course, as we all know, “red sky at night means St Malo is on fire”. 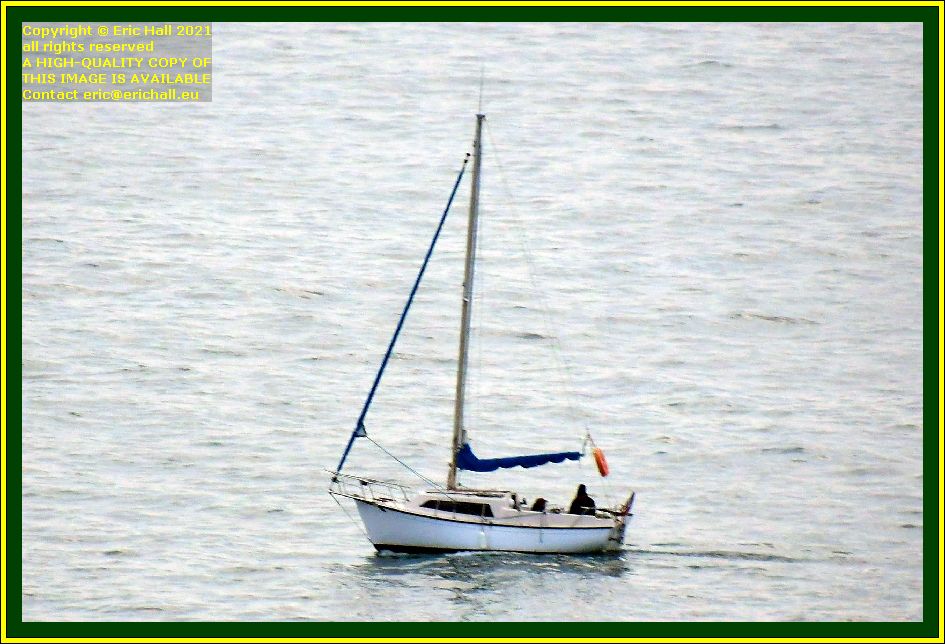 Arounf the corner in the Baie de Mont St Michel the sky was rather clearer.

There was a queue of boats, one of which was this yacht, loitering around just offshore around by Le Loup, the light on the rock by the entrance to the harbour.

As to why they were waiting, I don’t know the answer to that because judging by how far in the tide was right now, the harbour gates would have been open for a while and anyone could have gone back in had they wished. 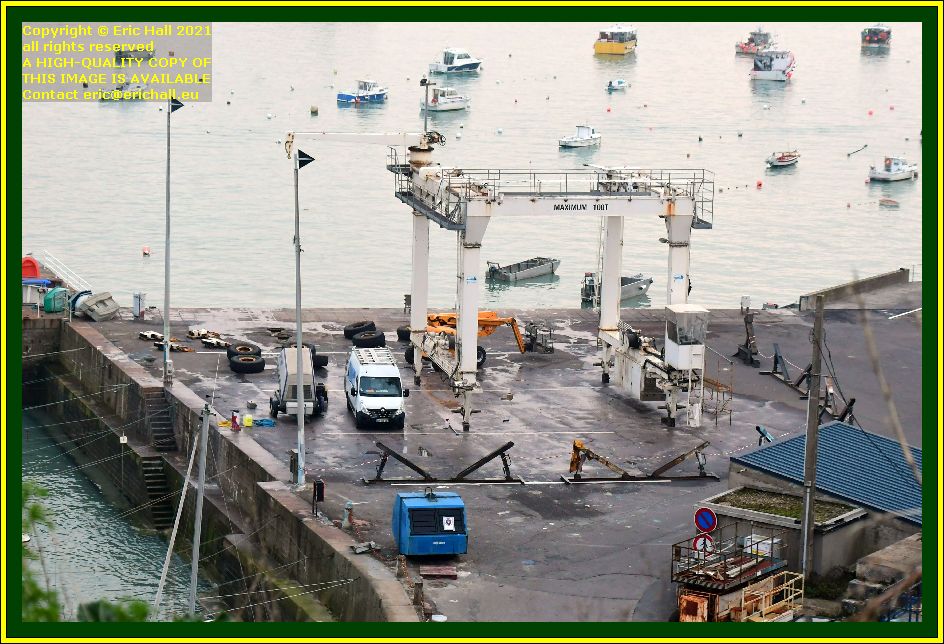 One thing that I did say previously was that I wouldn’t feature the chantier naval and the portable boat lift unless there was a change in situation there.

While I was out yesterday I noticed that there was something going on over there but with only having theF1.8 18.5MM LENS on the NIKON 1 J5 I couldn’t take photo that was clear enough.

Today though while I was right over there I didn’t have the same issues. But as you can see, we now have a van, a trainer and a cherry picker down there next to the portable boat lift, so it looks as if repairs are now well under way. 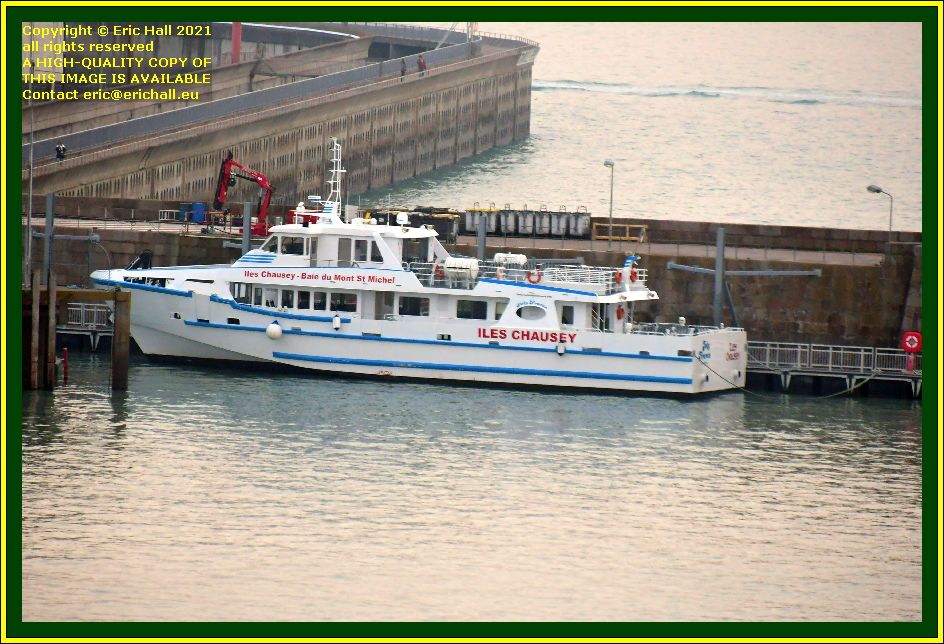 There wasn’t really much else going on over there so I had a look over at the ferry terminal.

Moored over there this afternoon is one of the Joly France boats. There’s no step in the stern and the windows are in “landscape” format so by that we gather that it’s the older one of the two.

As for the other Joly France boat and the very new Belle France, they are moored up together in the inner harbour and don’t look as if they will be going out to sea any time soon 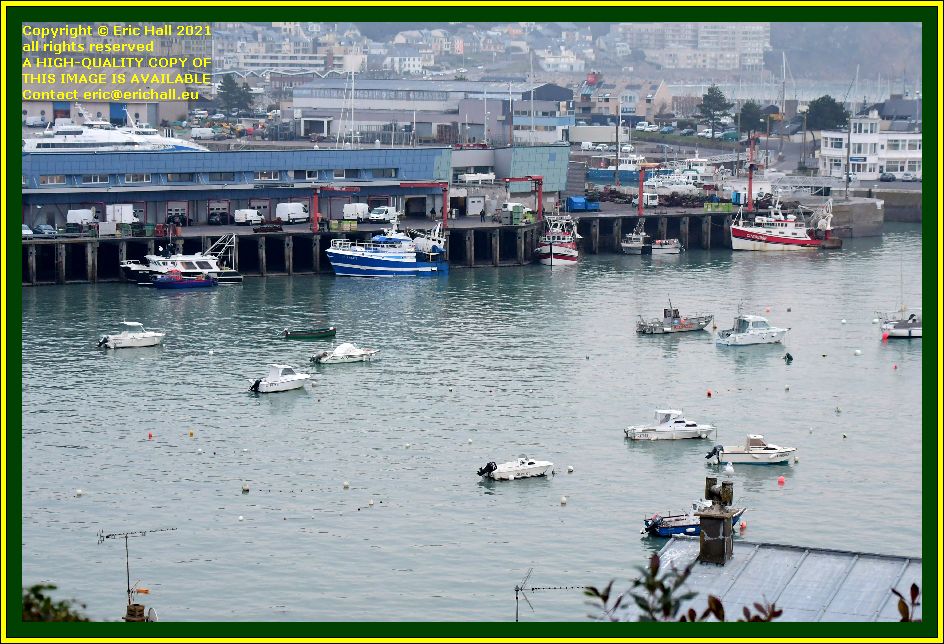 Also not going out to sea any time soon are some of the trawlers that hang around the port.

There’s a handful of them that came in to port a short while ago and are over there unloading at the fish processing plant.

L’Omerta is still over there looking as if she hasn’t moved for quite a while. And she seems to have acquired a tender – or, at least, there’s one tied up to her at this side. 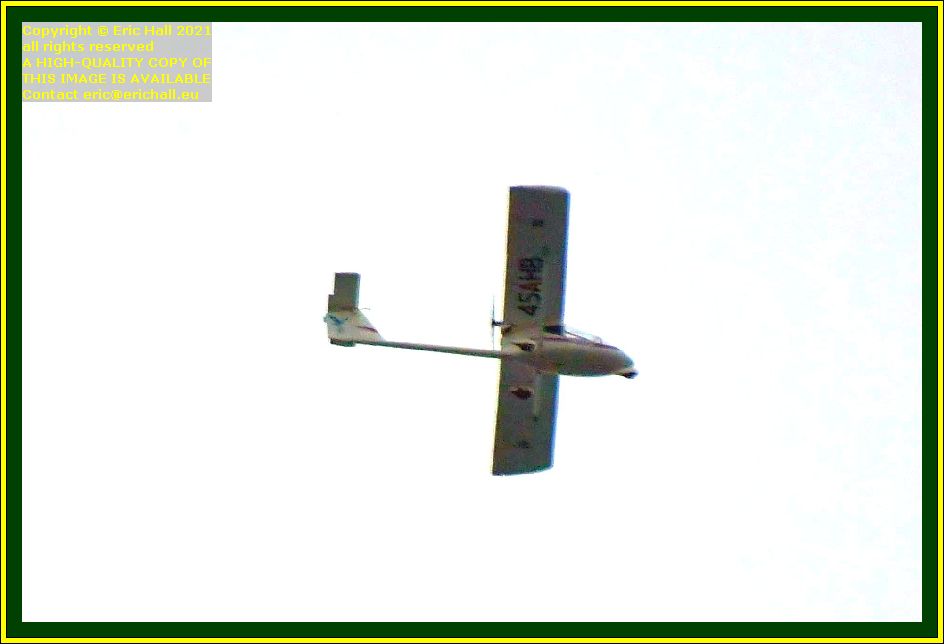 Seeing as it’s been a while since I’ve seen anything go flying by, I thought that I’d take a photo of this aeroplane as it went by overhead.

It’s another one of the light aircraft whose registration number isn’t in the series to which I have access so I can’t say very much about it.

Just as I was about to cross the road I was almost run down by one of my neighbours driving by so we had a chat, and then I came back for my coffee and to carry on where I left off with my work.

Tea tonight was the rest of the curry and it was just as nice as last night. Now I’m off to bed as I have an early start in the morning and a train to catch.