… a very good day today. I mentioned yesterday that I felt that I was feeling as if I was having something of a relapse and today I think that it caught up with me today.

Last night I was in bed fairly early and I had a very sound sleep – for a couple of hours, and then it all went wrong. Once I’d awoken, I found it very difficult to go back to sleep. That is – until about 5 minutes before the alarm went off, as you might expect.

During the night I’d been on my travels too. I’d been out for a meal with my niece, her husband and one or two of her daughters. We got to this Indian restaurant but I had to nip off and do something. There was an engine in the hallway in Vine Tree Avenue and I wanted to take it up to my bedroom to work on it but it was leaking oil everywhere so I had to wash my way behind it, clean up all of the oil and everything, stack it on newspapers and so on. Then I could go back to this meal. They already had their food and were well on their way through it so I apologised. My niece said something like “I don’t think I like you any more Eric”. It really was embarrassing because I didn’t have any meal at all in this restaurant.

Later on I had my brother with me again in a car. We were going somewhere to meet a girl. We went along Bradfield Road and there was a garage on the right-hand side and there was one further on the left over the railway bridge. I asked if the one further on the left was open. Everyone seemed to think that it was so I went there but it was closed so I had to go back to the other one. I put enough fuel in to get us down towards Middlewich and then drove off. For some reason I had to go back and get more fuel. I went back but this time that garage was open. We fought our way in through the crowds to fuel up. There was a girl there who worked in the petrol station handing out 4x£1:00 notes to everyone fuelling up. I put in some fuel and grabbed my money. My brother grabbed some money too and in fact grabbed some more of another girl. We drove out and the subject came round to this girl. I knew who she was but I had to find out where she was. I had to look on this chart and everything. Eventually I found her. She was 56C. Then I thought “I’d better go back and get more petrol”. I asked my brother “are you going to come back with me?”. he said “no”, got off and went into a shop. I turned round ready to go back and get more petrol and hopefully get more money as well.

After the medication, I couldn’t find the energy to start work and ended up sitting here vegetation for several hours while I tried to summon up something. Eventually I ended up wading through a pile of photographs, sorting out the duplicates and deleting the unwanted files.

After lunch, feeling a little (if not very much) better, I scanned all of the documents that I’d received from the cardiologist as well as the receipts that related to my visits yesterday. I don’t want to end up like I did the other day with 18 months worth of receipts, some of them missed and some of them out of time.

Once that was done I made a series of ‘phone calls to Leuven. After being passed from pillar to post, I eventually, after much binding in the marsh, ended up with the secretary of the Cardiology Unit.

She told me to write a mail with all of my details and a resumé of my case, and attach the photocopies of the report that I had received, and that took much longer than it ought to have done as well. 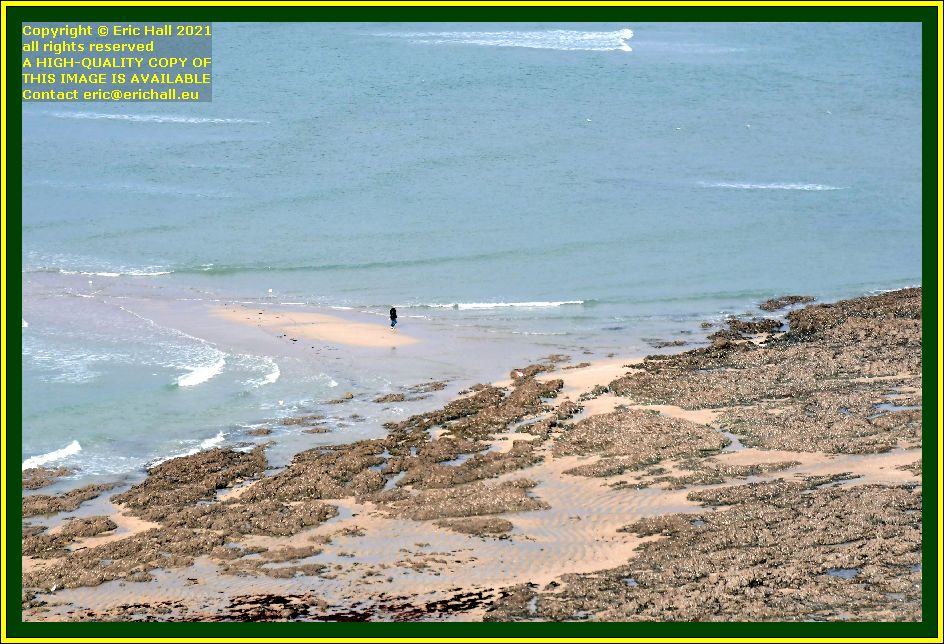 All of that took me up to the time to go for my afternoon walk.

First port of call is the wall at the end of the car park where I can peer over and down onto the beach to see what was happening.

There were plenty of people wandering around on the path but for some reason or other, the beach was strangely deserted. All I could see was this guy standing on a sandbank at the water’s edge.

There was what looked like a pile of clothes or a bag or something on the rocks nearby, but I couldn’t tell if they belonged to him. I couldn’t see anyone swimming in the water. 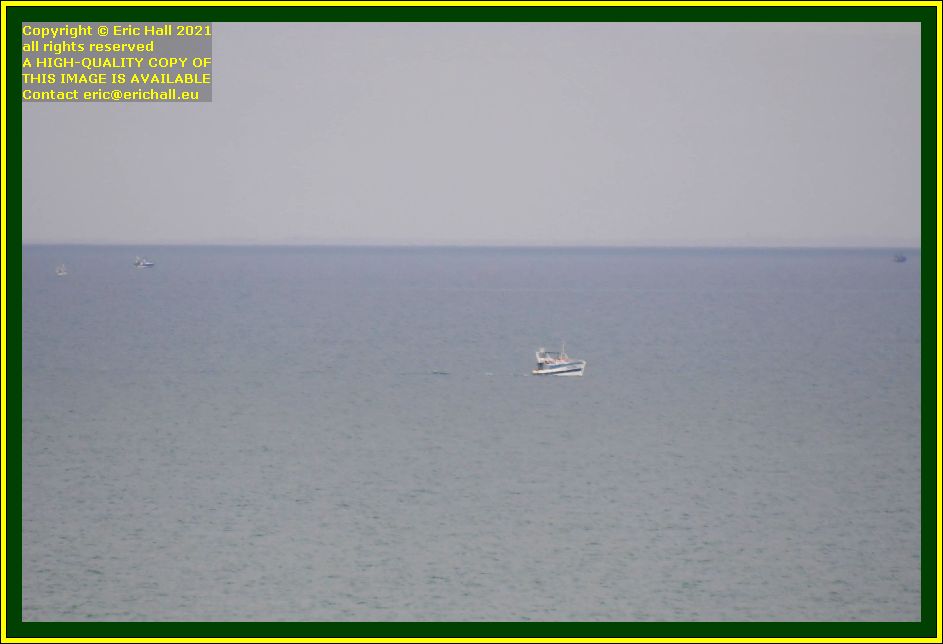 Looking out to sea, I couldn’t see any boats of any description with my naked eye but there was a glint of sunlight on glass somewhere out there.

Consequently I took a speculative photograph with the idea of enlarging it and enhancing it when I returned home so that I could see if there was anything exciting happening out there.

In fact, it turns out that there were half a dozen fishing boats in that sector of the bay. With so many boats having been refused (for the moment) the right to fish in the Jersey sector of the Bay, they are exploring other avenues. 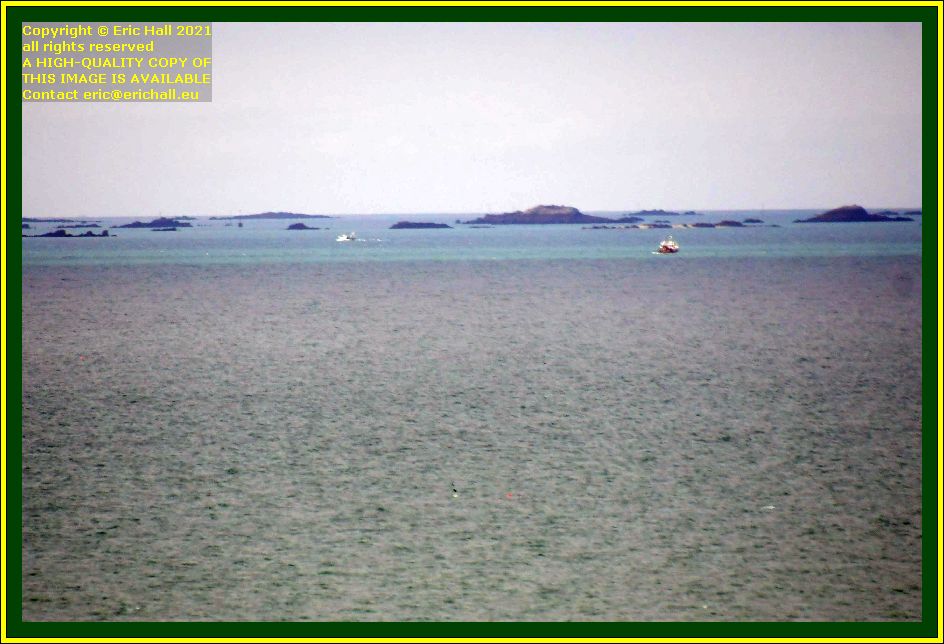 Such as just offshore at the Ile de Chausey.

In all of the time that we have been living here, we’ve never seen fishing boats operating that close to the islands.

The issue about fishing permits is that the Jersey authorities are insisting on proof that the boats have previously fished in the bay, but many of the smaller boats are not equipped with radar or AIS equipment and so don’t have print-outs to show where they have been fishing.

Incidentally, this dispute has nothing to do with Brexit. The Channel islands, despite being a British territory, were never part of the European Union and fishing in the bay was regulated by Normandy, Brittany and the Channel Islands under the Treaty of the Bay of Granville 1834.

The Channel Islands have simply leapt on board the Brexit bandwagon to use it as an excuse to unilaterally revoke the Treaty and keep the fishing grounds to themselves.

But as I have said before … “and on many occasions too” – ed …. the Channel Islanders can catch as much fish as they like but it all counts for nothing if they are prevented by the French fishermen from landing their catch at a French fish market.

Since this situation has escalated, I’ve not seen a single Channel Island trawler permitted to unload here. 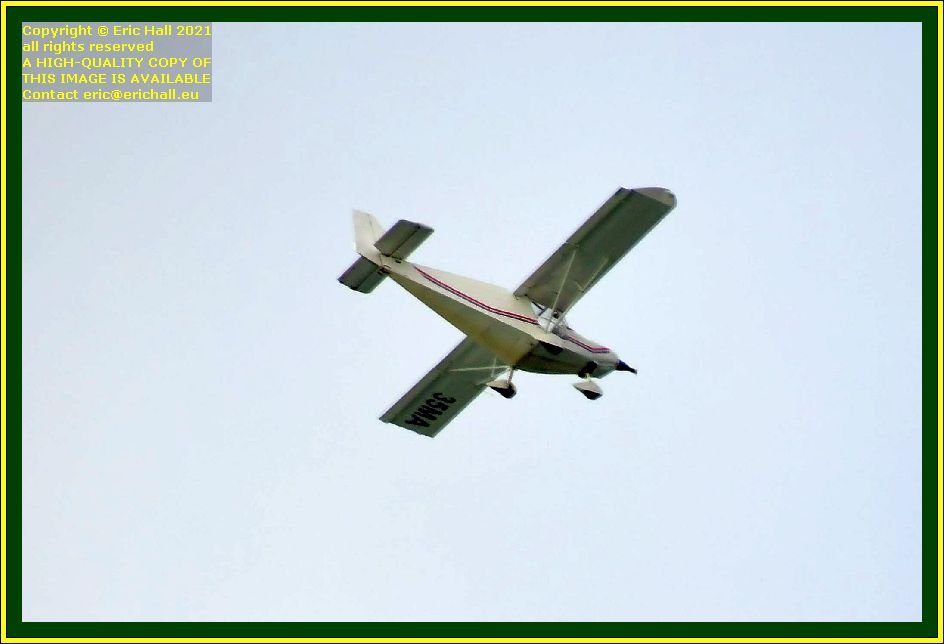 While I was admiring the maritime activity, an aeroplane came flying by overhead.

It’s another one of these light aeroplanes with a registration number that is out of the run of the normal series.

We’ve seen this one on several occasions in the past. She’s registered as 35MA but apart from that, I’ve never been able to find out any more about her.

Now that all of that is out of the way, I could head off down the path towards the lighthouse. 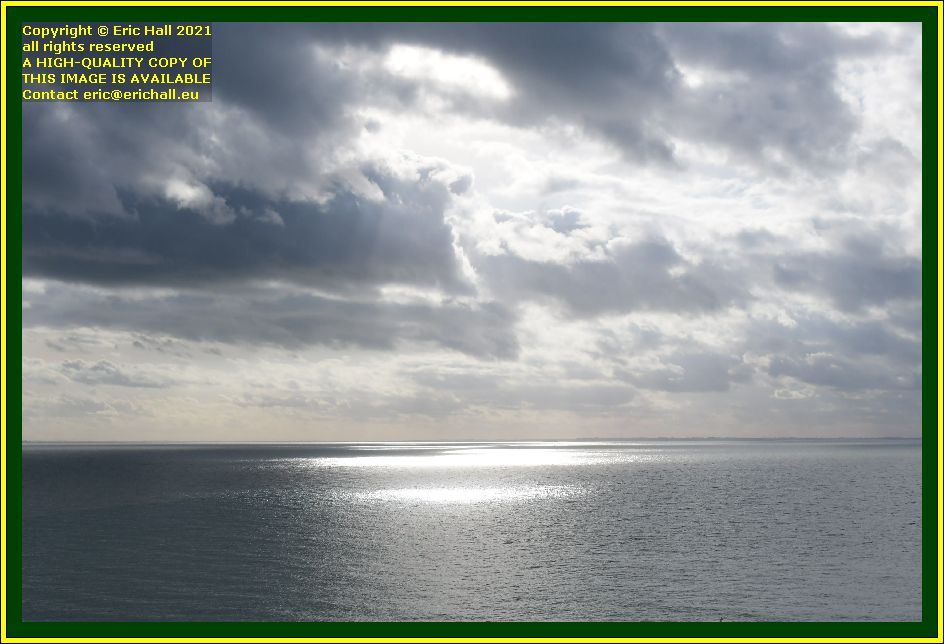 another thing that I mentioned yesterday was that now that the sun is lower in the sky, we’ll be having some interesting effects out in the bay.

And sure enough, this afternoon we have another really good one. It’s not quite up to the TORA TORA TORA standard as far as the rays from the sunshine through gaps in the clouds go, but the reflection of the sun on the water is really impressive.

What was sad about this was that there was no-one else watching it. No-one was sitting on the bench down by the cabanon vauban this afternoon enjoying the view, and no fishermen out on the rocks either. 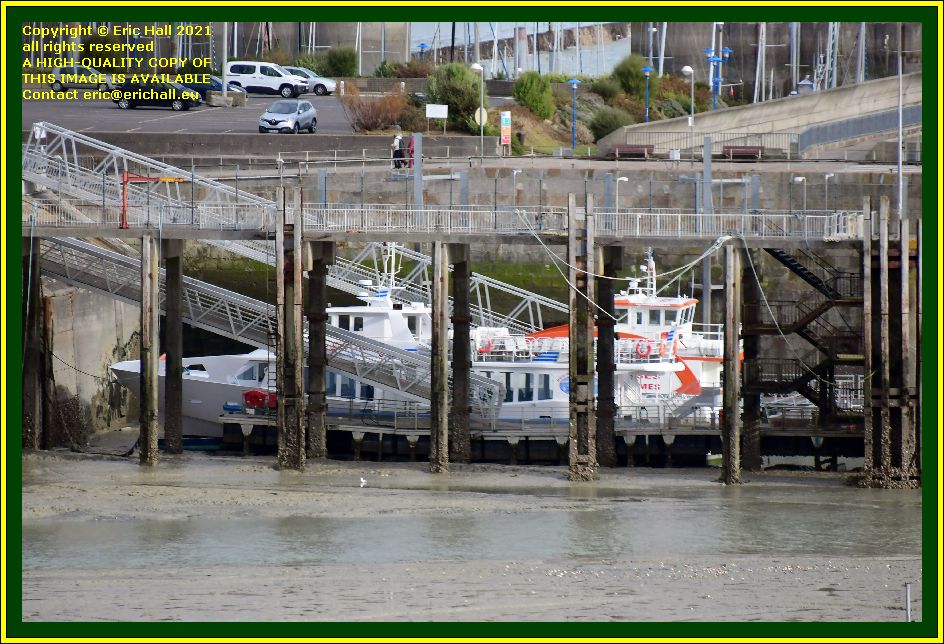 Walking along the path on top of the cliffs, I came to the viewpoint overlooking the tidal harbour.

Over by the ferry terminal we have one of the Joly France ferries, the newer one if I’m not mistaken. Behind her is Chausiaise, the little freighter that runs out to the islands. She was parked at the loading bay under the crane when we last saw her.

The chantier naval was strangely deserted today. Since Yann Frederic went back into the water, no-one has come into take her place. It’s quite rare these days to see the yard looking so empty. 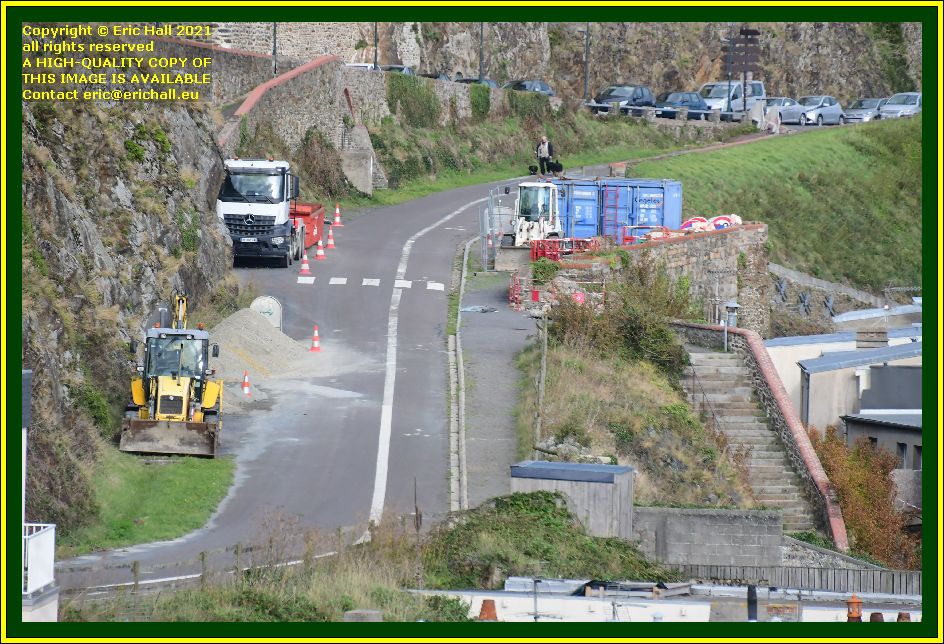 Further along on my walk I could have a good look down into the Boulevard des Terreneuviers.

The work must still be proceeding in the Rue Cambernon because the workmen’s compound down there hasn’t yet been dismantled and there seems to be plenty of activity with all of the signage, piles of sand and gravel and all of the machinery.

Back at the apartment I found that the postman had left me some presents so I brought them up here and made myself a coffee.

Having drunk the coffee I made a start on sorting out the paperwork for filing but regrettably I fell asleep. I thought that I’d gone through all of that but Sunday and today have been a big disappointment in that respect.

Tea was taco rolls with the remainder of yesterday’s stuffing lengthened with a small tin of kidney beans and then I came here to type up my notes.

Right now I’m absolutely exhausted and I’ve no idea why. It’s like the bad old days of a couple of months ago that I thought that I’d put behind me. I’m going to go to bed in the hope that I’ll sleep it off and have a better day tomorrow.