… day of rest around here, as regular readers of this rubbish will recall. And I rested so well that I actually crashed out for 10 minutes in the late afternoon, and how long is it since I’ve done that?

Mind you, it was another depressing night. It was 03:00 when I finally crawled into bed last night after all that coffee. But I was up and about at 04:40 with a severe bout of coughing that awoke me. I had to go off and have a drink of water.

That’ll teach me to eat a handful of peanuts just as I’m going to bed.

But once back in bed, it took an age, a real age, to go back off to sleep and even when I did, I was wide awake again at 09:30. I stayed in bed though, hoping that I would go back to sleep again but by 11:00 I gave it up as a bad job and went for my medication.

Before lunch I paired off all of the music for the next radio programme that I’ll be preparing tomorrow – that is, depending on what happens at the heart consultant tomorrow at 08:00.

As well as that I have the nurse coming for my injections in the afternoon followed by the physiotherapist, so I’m going to be pushed for time.

There was some stuff on the dictaphone too from last night. There was some filming going on in our school. I’m not sure what it was about but I was there looking at the stills afterwards to see if there was anyone there whom I recognised. Afterwards the producer was issuing a couple of girls with rail tickets, a years worth, 12 x monthly ones. He was putting on the date. It was something like January for this and every subsequent year. I remember saying to him “I hope that this picture will be finished before the end of this year, never mind every subsequent year”.

I was doing something for G&B Coaches last night but it involved being in cars. One of the cars was an Austin Princess that I was driving. When I brought it back home I checked the oil and the oil was low so I topped it up. I set out to do what I had to do and we all met up near a beach somewhere. There was one driver, a girl, missing. While we were sitting on the beach we were wondering where she was. Then I went to check the engine oil again and the whole inside of the engine compartment was awash with oil. There was obviously a major oil leak somewhere. This was awful. We had a talk about that. I mentioned that they should have a mechanic in to fix this because this will cost them a lot in the long term with the oil. One of the guys said “with a mechanic in, that’s why they can get all these boxes of spares that they’ve bought and go through them and work out that they’ve made a good deal out of it all”. That still didn’t convince me anything about the state of this Austin Princess that was leaking oil everywhere. I thought that i’d be lucky if I get home in this.

There is also the afternoon walk but before I set out I had some bread to make. I’ve run out of fruit buns for breakfast so I made some dough with everything in it, mixed it all up and kneaded it, rolled it out and cut it into 8

With the lumps of dough I rolled them round into balls, pressed them down and put them on a baking tray to leave them to rise up. 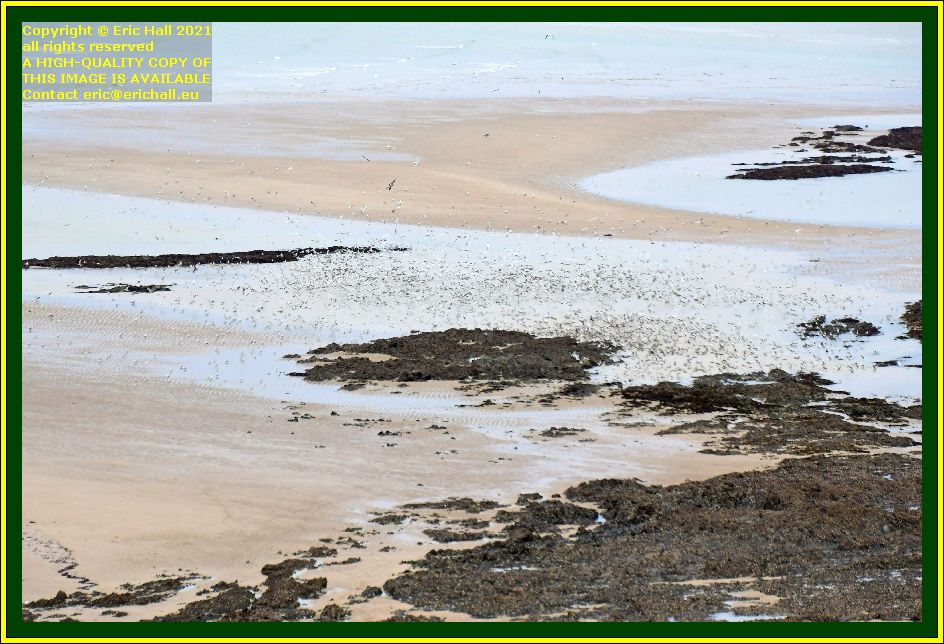 Of course I had to go out to the end of the car park and look down over the wall onto the beach to see what was happening.

Never mind the beach, or the people thereupon. I was much more enthralled by the sight that caught my eye down in one of the tidal pools.

Just about every seagull in the Manche seemed to be either floating on it or hovering above it. According to someone with whom I was talking, it’s a feeding frenzy. Maybe a shoal of fish has been left behind as the tide has retreated.

Had I been fitter, I’d have gone down and checked it, but going down the steps is one thing – coming back up them afterwards is something else completely. 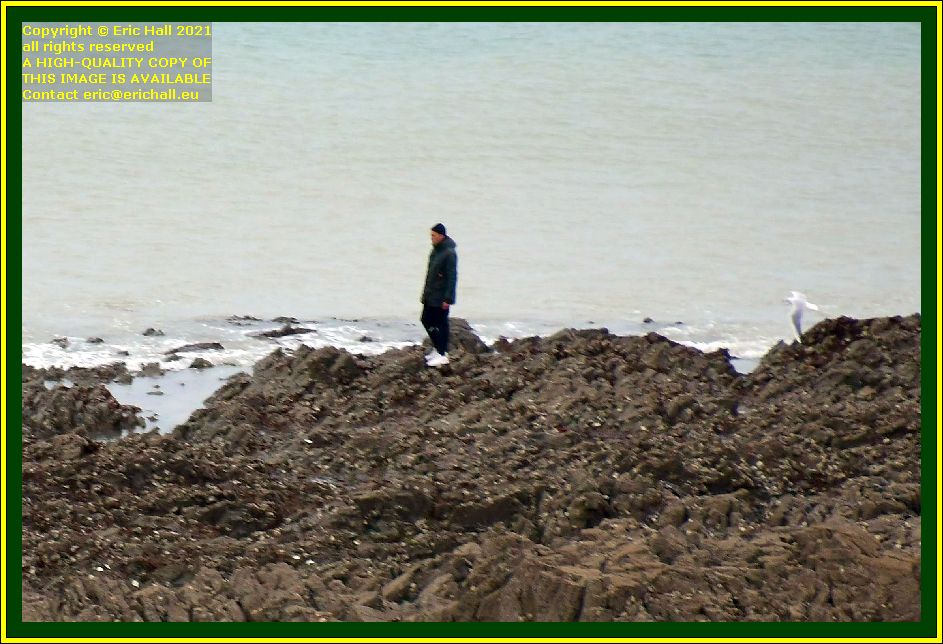 There was however someone down there on the beach.

And he was in danger of coming under attack by a low-flying seagull that is coming along to inspect him. I’m not sure exactly what he was doing down there. He wasn’t equipped for the peche à pied, or any other kind of fishing either.

But anyway, I wasn’t going to hang around and watch him while he strolled about among the rocks. I cleared off down the path towards the lighthouse, fighting my way through the crowds as I did so. it was quite busy out there this afternoon. 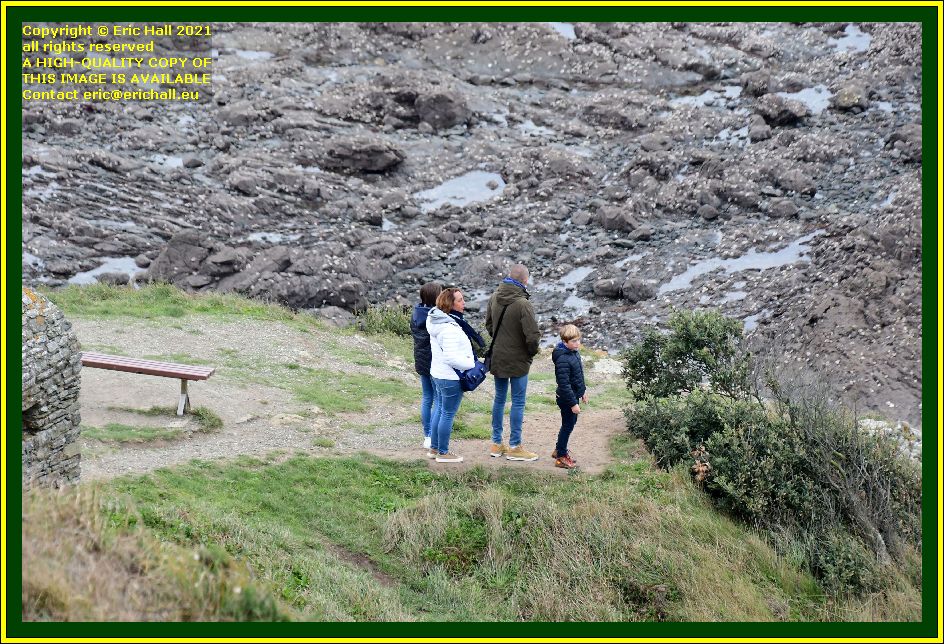 Down the path and across the car park, I came to the end of the path at the headland. 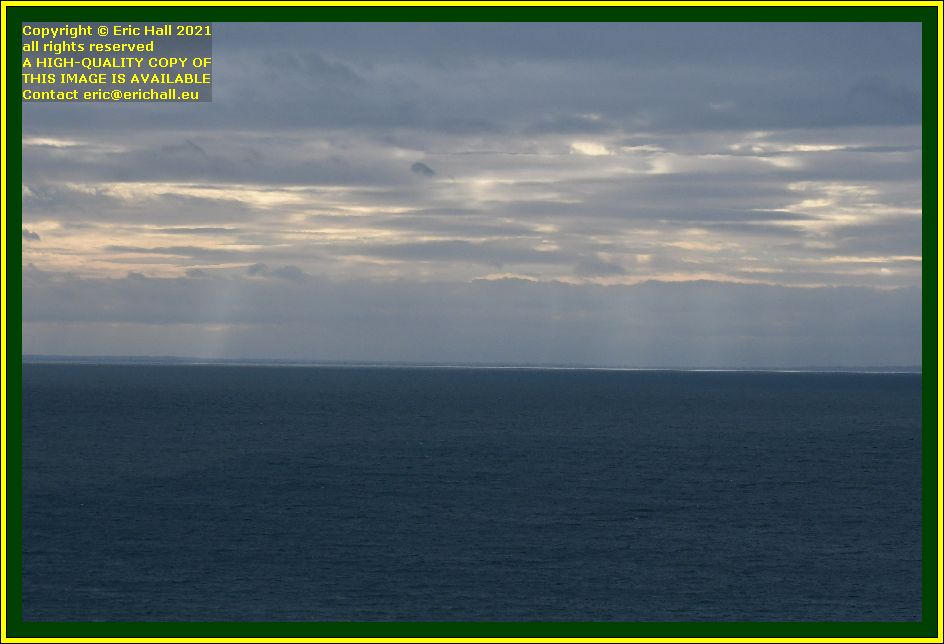 You can tell that the autumn is well on its way now, judging by the sun.

This kind of photo is a regular feature of these pages during the autumn and winter with the sun at a very low elevation in the sky shining through gaps in the clouds giving a kind of TORA TORA TORA effect to the sky.

There will be a few more of these as the year progresses.

From here I wandered off down the path on the southern side of the headland towards the viewpoint overlooking the port. 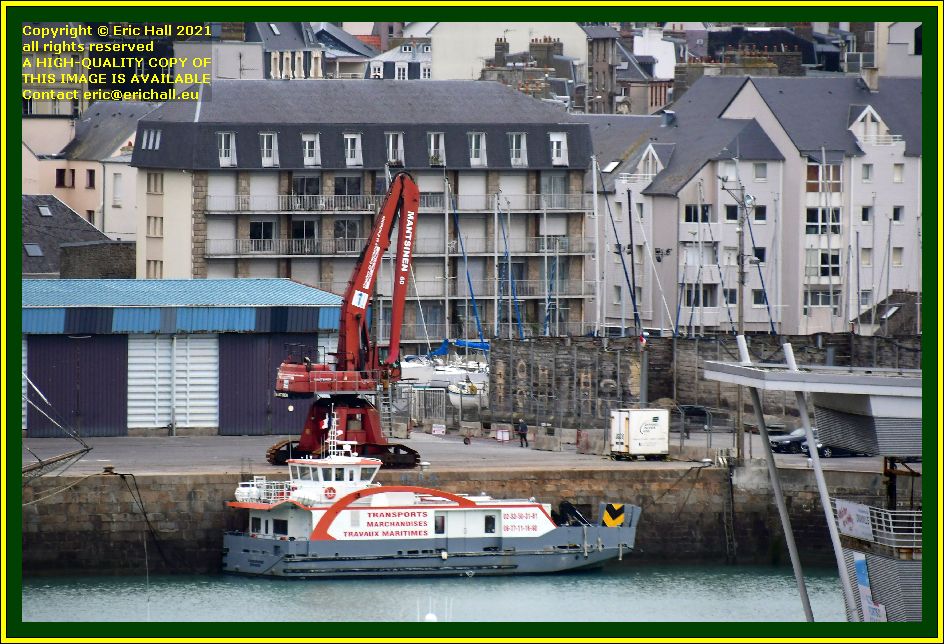 There was no change in the Chantier naval today. Yann Frederic was still there all on her own.

Jade III had gone from her perch on the slipway into the tidal harbour too and so I turned my attention to whatever was going on in the inner harbour.

Chausiais was there, tied up at the quayside underneath the crane. That tells us two things –

Back at the apartment I had a coffee and then turned my attention to my stomach.

Earlier on, I’d taken out some dough from the freezer and it had been defrosting. By now it was ready so I kneaded it again, rolled it out and put it on the pizza tray to proof for the next half hour or so. 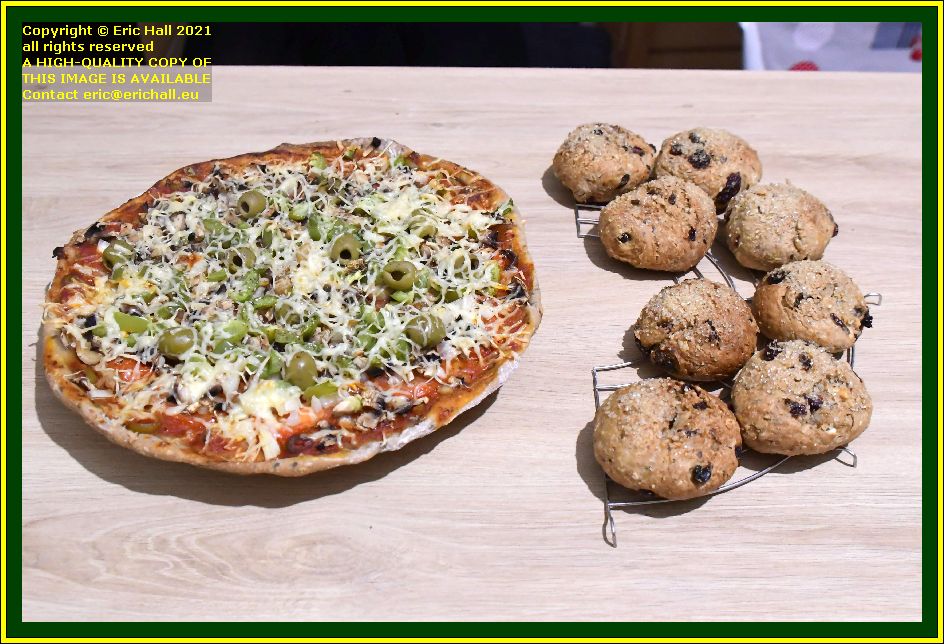 While I was assembling my pizza later, I turned the oven on and put the fruit bread buns in to back. It had all risen quite nicely over the last hour or two although I would have liked it to have risen more than it has.

When the buns were ready I put the pizza in and when it was cooked I went for my tea.

It was actually one of the best pizzas that I have ever eaten. The fruit buns look really good but I’ll be telling you more about those tomorrow.

For a change I’ve actually finished my notes early, so I’m going to take full advantage and go for an early night ready for tomorrow. It’s a busy day so I need to be on form.