…of those days when very little seemed to go right today.

Such things as having yet another bad night’s sleep, awakening bolt-upright for no good reason at 06:00 exactly, that sort of thing.

And despite having turned on the heating in the room last night, it was flaming cold as well.

The way that I leapt out of bed was hardly “with alacrity” this morning. I waited around for a few minutes for the room to stop spinning before I left my stinking pit.

After the medication I checked my mails and messages, had my breakfast and then went for a shower. And despite having turned up the heating to “full”, it was still cold and I didn’t enjoy the shower at all.

There had been a couple of voyages on the dictaphone during the night too. I was out looking at property or trying to find somewhere last night for me and my cars but there was nothing suitable. Nowhere had any land – anything with any land was immediately bought, demolished and built on and you couldn’t find a thing. The Estate Agent wasn’t very helpful either. He was telling me that that was what happens and the only thing to do was to keep on looking, put my name of a few properties and see what happens. He asked me the usual questions – what kind of place did I want? Did it need to be improved? And so on. He asked how many cars I had and he nearly died when I said “12”.

There was also something about our friend in Virlet last night, whoever “our friend in Virlet” might be. It was going dark and I was working round the side of the barn when someone came round and they weren’t expecting to see me. They were totally surprised that I was there. They asked where was the handle – the broken handle out of the fork that I had taken out yesterday that I’d put down somewhere? I replied “I gave the fork and the handle back to you. Where did you put it?”. He couldn’t remember where and that was all that I remember.

Having made my sandwiches I headed off through town towards the hospital, taking a few photos on the way. 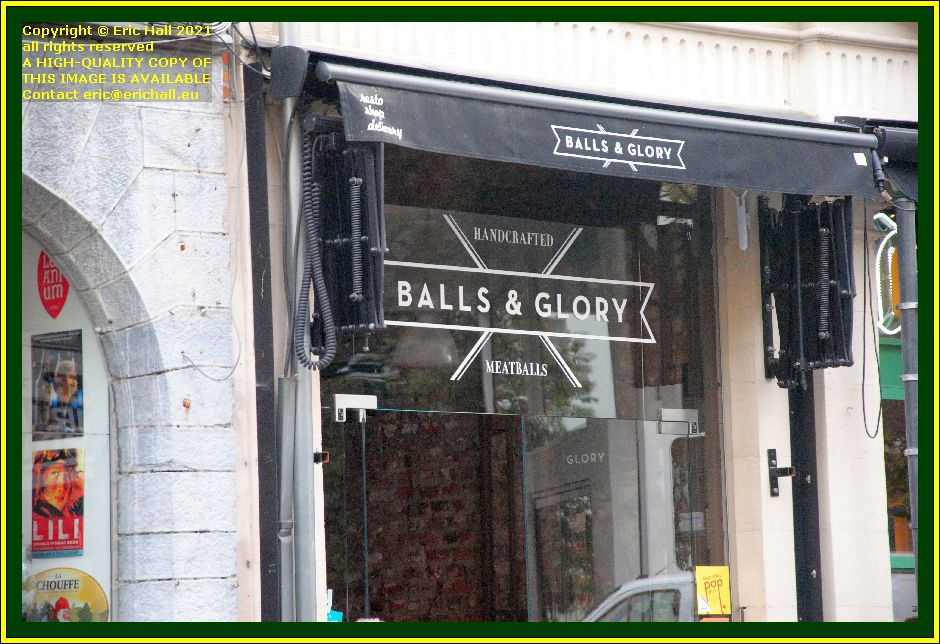 Some of the photos didn’t turn out, for a reason that I haven’t understood.

The shop is called “Balls and Glory” but if you ask me, there isn’t much glory in making hand-crafted meatballs. To me, it sounds like it’s all … well, quite. 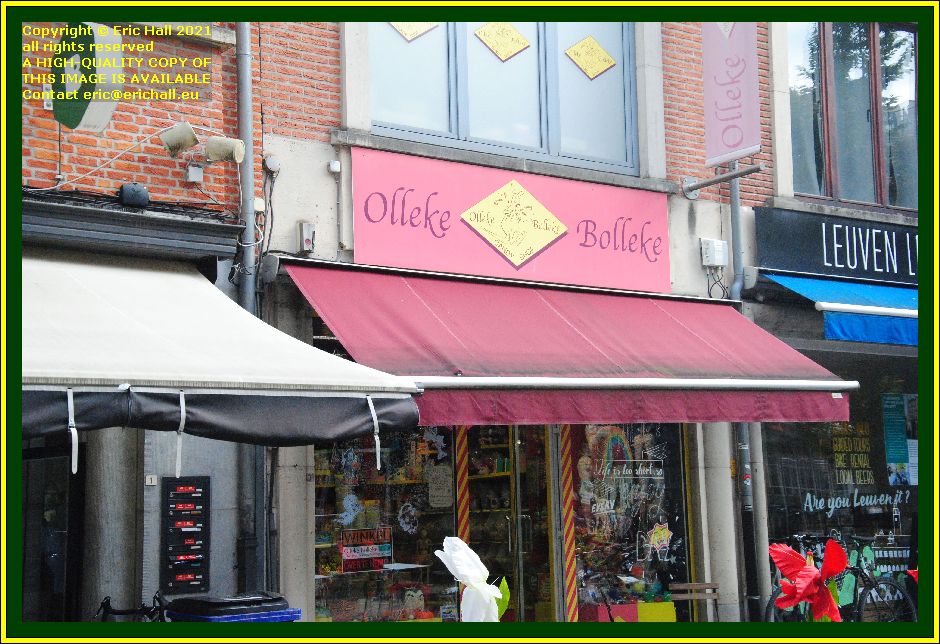 A little further on down the road is another shop with a bizarre name.

Olleke Bolleke is a sweet shop that sells by the 100 grammes these gelatine-laden sweets that are bad for the teeth. I first encountered one of these shops in Brugge in the 1970s and the chain seems to be going from strength to strength.

As it happens, I’ve never actually been in one but I don’t think that there’s very much olleke being sold in there . It’s probably all … well, quite.

There wasn’t all that much happening in the town centre today. The exhibition for the cycle race has been cleared away and there’s nothing much as yet been put in its place. 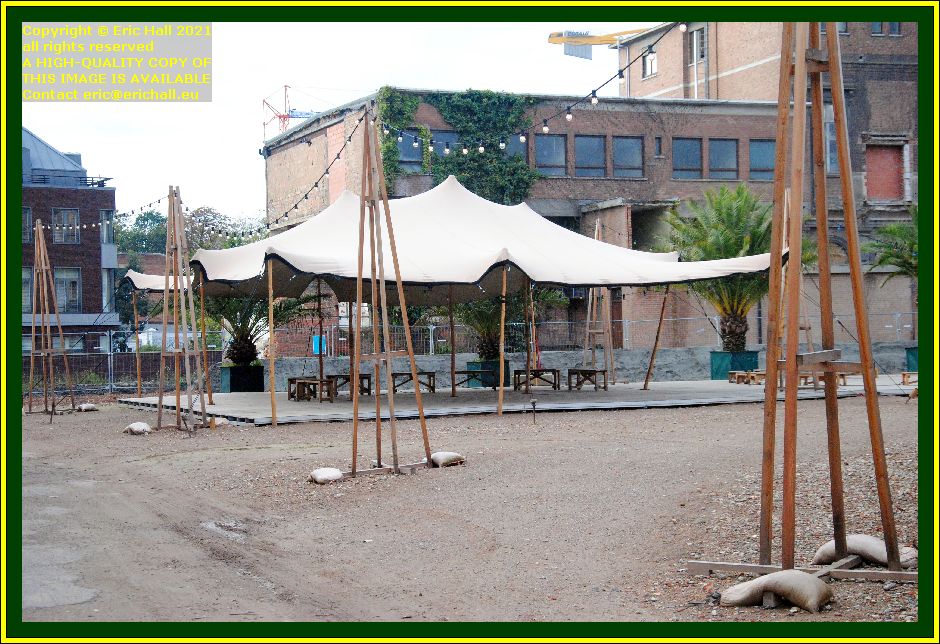 The exhibition has even gone from the site of the Sint Pieter’s Hospital.

The marquee or pergola or whatever it is is looking very sad right now with nothing going on. Just a pile of benches and a few tables that aren’t serving any useful purpose.

But imagine that in the UK. You would have to chain the furniture down to the floor and even so, it would still go missing. Life is so much calmer here in Europe.

But the palm trees will need to go missing soon because it won’t be long before we start to have the frosts and I can’t see them doing very well over the winter if they are left out there. 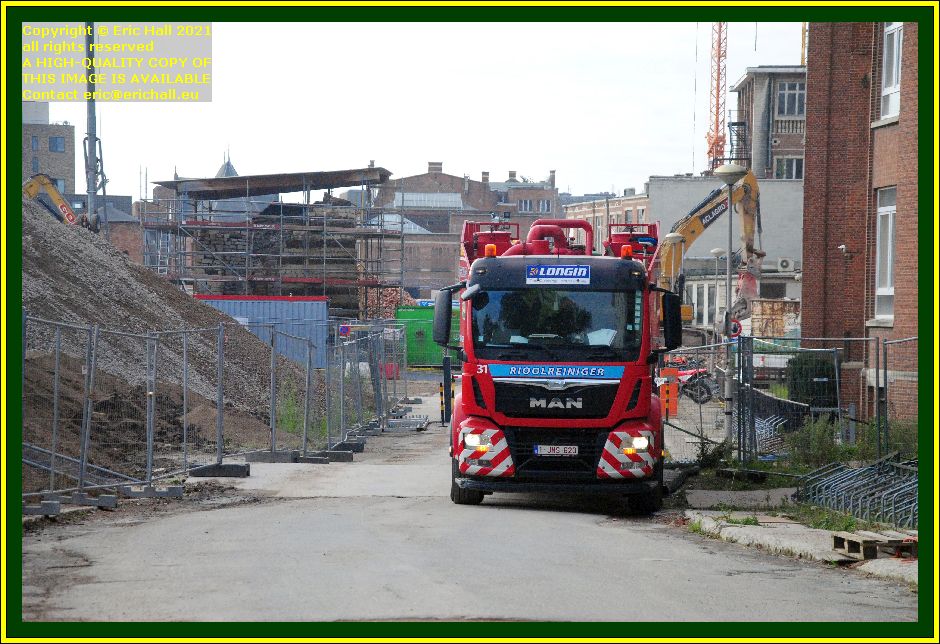 Further along the Brusselsestraat work is continuing apace.

Not on the old medieval tower though, that’s still covered in scaffolding and roofing sheets to protect it from damage while the demolition continues.

But you can tell by the rest of the machinery that they are still in there demolishing that other building. I’d have shown you how that was proceeding, except that the photo didn’t turn out.

Several others didn’t turn out either, as I discovered later, and I’ve no idea why. 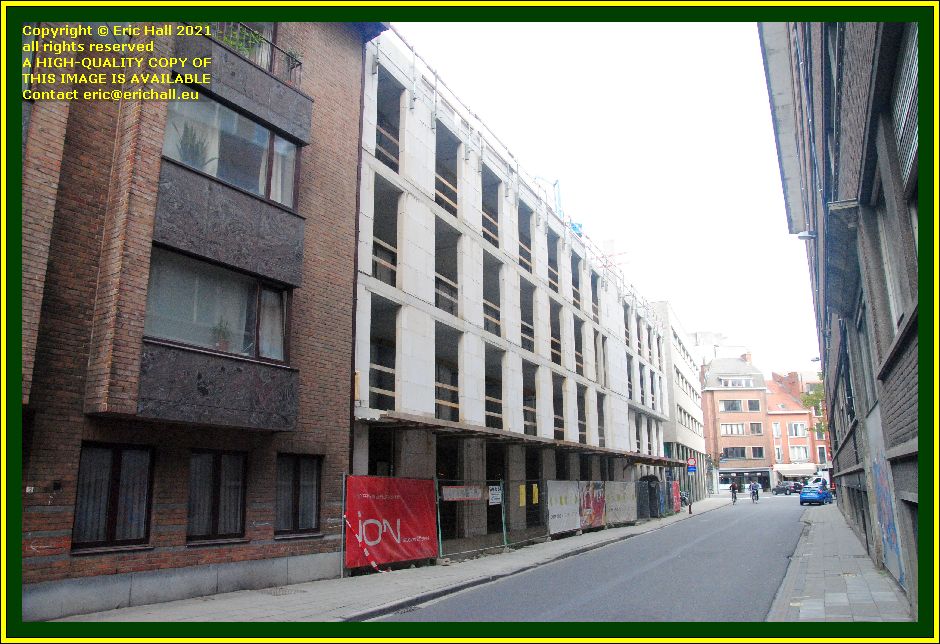 usually I leave the photos of the building work in the kapucijnenvoer until on the way home but as I’m not coming straight home this evening, I went that way towards the hospital.

The building that backs onto the Zongang is coming on in leaps and bounds which is quite a surprise for Belgium and it can’t be long now before they think about finding some occupants for it.

It’s rather tough though for the occupants of that nice little house in the Zongang who now have this new building blocking out all their light.

There’s another building site in the Kapucijnenvoer as regular readers of this rubbish will recall, but the photo of that was one that didn’t turn out.

The climb up the hill to the hospital was a little better than it had been last time. I managed to push 50 yards on the distance that I made last time before I needed to stop for breath.

At the hospital I had a CT scan of my chest – and then I had to wait. “I’m sorry that you had to wait so long” said the nurse. “I had to send for a doctor to look at the images”. I don’t like the sound of that very much.

After a wait around I had to go for another test to measure the capacity of my lungs – breathing in and out of a long tube.

Finally I could go round to the Oncology department for my usual treatment. I arrived there at 13:40 for my treatment that was timed for 14:00, and I was finally seen at 14:45. I’ve no idea what was happening today that was making them run so late.

It was 17.30 before the doctor came to see me too but at least this time it was a doctor who was very concerned and very interested – not like the one that I had a couple of times ago.

My blood count has seen a dramatic rise – to 9.7 and I’ve no idea why. He went through my other results too and explained them to me. Apparently there wasn’t much out of order with my breathing and my lungs in the way in which they are functioning.

As a result he’s going to try to make an appointment with a cardiologist for me who will hopefully probe my case a little further. I didn’t tell him that my doctor at home is also on the case. 2 opinions are better than one.

This all finished by me being hours late for everything so I waited at the hospital for Alison to come there and pick me up. We went round to her house, having to go back to the hospital to pick up the medication that I had forgotten.

Alison had bought some vegan sausages so while I cooked them, she went to the fritkot for some chips. And it was a lovely tea too.

Afterwards we had a lengthy chat until I began to go to sleep so she kindly ran me home. Now I’m off to bed for a good lie in. No alarm in the morning – I’m going to sleep until I wake up