Not that going to bed early helped much, because, as you might expect, I was awake again at 05:20. It’s rather pointless, isn’t it?

After the medication I came back in here to listen to the dictaphone to see where I’d been during the night. It started off with something somewhere about me having a twin VHS recorder and I was trying to copy films from one tape to another, but it was so long since I’d done it that I couldn’t remember and I wasn’t doing very well at this. I’d tried 1 or 2 but it didn’t seem to work so I was having to go away and sit and think about how I used to do it and try to do it again. I can’t remember much more than that.

Later on I was in Brussels and suddenly had a whim to go down to the Auvergne so I climbed into Caliburn and set off. It was rush hour of course so fighting my way around the ring road was something of a nightmare with all kinds of people doing all kinds of crazy things. Eventually I arrived. I don’t remember the journey and I don’t remember arriving but the next thing that I remember was that I was sitting in what I suppose was my living room on some comfy seat on castors that you could move around with your feet. There was a big roaring fire and Rosemary was there who had presumably lit the fire for me. Later on – because I dictated the first part and then afterwards stepped right back into the place where I left off, AGAIN! – there were 2 girls there and I had to show them how to use the bathroom and everything. I looked outside and it was snowing so I went to send a text to say that it was snowing but then I thought to myself that this can’t be real – in a dream as well! – because it was August. It was getting light so Rosemary who had now transformed herself into that woman whom I knew in Stockport wondered if she should make us all a cup of tea. I thought that that was a great idea. As it became light there was a couple of dogs flying around into the area and they met up with each other and started to fight.

This was actually one of the most realistic voyages that I have had and when I awoke I was all for immediately leaping into Caliburn and leaving Brussels for the south.

This morning I had a little relax and took care of a few personal things that needed attention, and then just as I was about to start work, Rosemary rang – by pure coincidence – and we had another one of our marathon chats that went on for ever – well, until lunch time actually.

After lunch I had a shower, set the washing machine off and then headed off to the physiotherapist 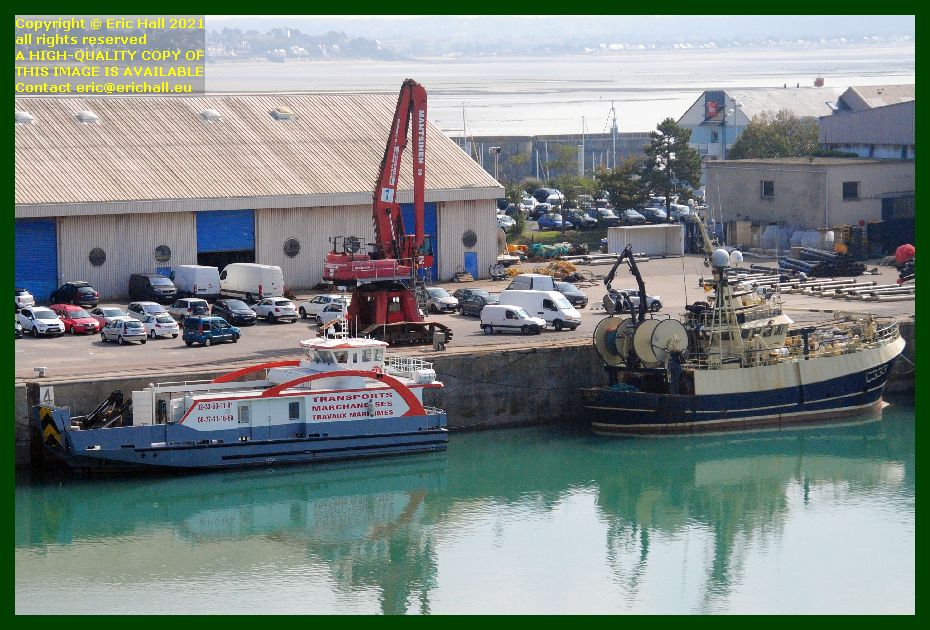 Regular readers of this rubbish will recall that yesterday we discussed the two cranes on the quayside and how one of them seems to have developed some nomadic tendencies of late.

It’s been off on its travels too since we last saw it. It’s now found a place on the quayside in between Chausiaise, the Ile de Chausey ferry, and Buddy M, the trawler that came over from Ireland the other day for a reason that I have yet to discover.

There’s plenty of traffic on the quayside too and I wonder why that is. Usually there’s no big issue about parking in the public car parks once the tourists have gone home and I’ve no heard of any big event going on in the town today. 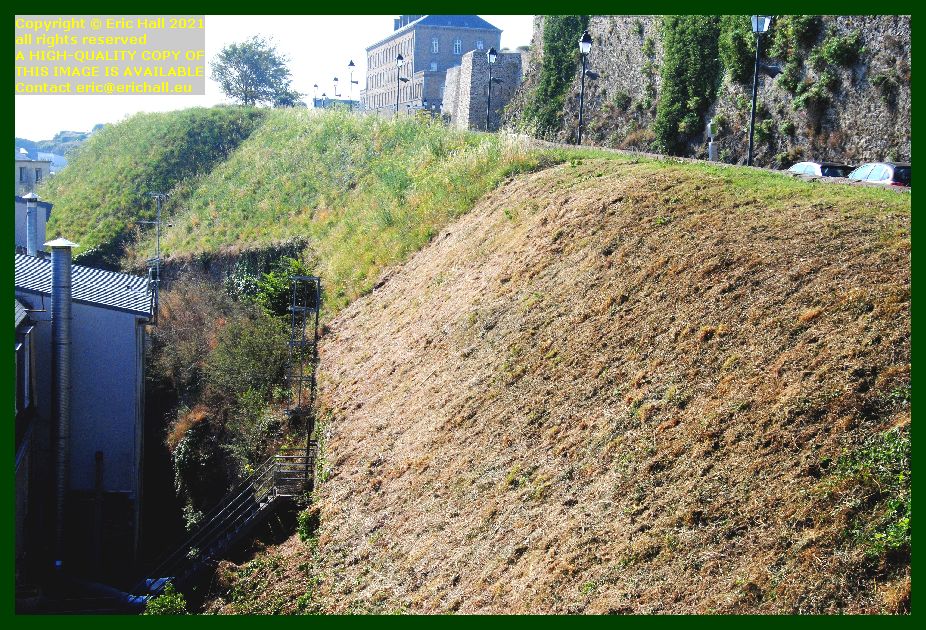 On my way downhill in the Boulevard des 2E et 202E de Ligne on my way towards the Rue des Juifs, I noticed that at last they have started to trim the vegetation.

Usually, I’m all in favour of letting the vegetation grow as much as it likes without doing too much trimming but regular readers of this rubbish will have noticed from some of the blurrings on some of the photos, that the vegetation has grown so high that it’s been getting in the way of my photos and I’m not tall enough to photograph over it.

So I’m hoping that clearing the vegetation will improve my view and improve the quality of my photos. and they need all of the improvement in quality that they can get.

“And who are the 2E et 202E de Ligne?” I hear you ask. The answer is that the Second and Two Hundred and Second Regiments of the Line were the regiments that were stationed in the barracks here where I now live.

From the town centre I pushed on up the hill towards the physiotherapist, stopping more times than I would like or care to admit, in order to catch my breath. 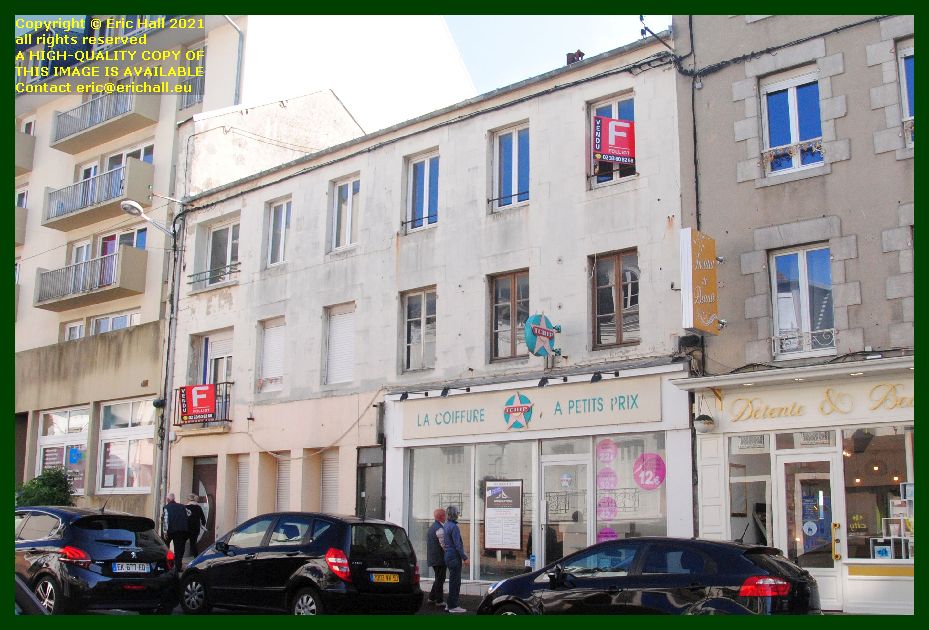 As I came up to near the top, I stopped to have a look at what was happening to this building.

It used to be a hairdresser’s with apartments over the top but one day about a year or so ago an announcement went up in the window Fermé à cause de péril imminent – “closed on account of an immediate danger”.

A short while later I managed to wangle a view of the Order from the Préfet. The building was said to be in a dangerous, insalubrious condition with a list of faults in the apartments as long as your arm. In view of that, it was no surprise that they obtained an Order for eviction and closing of the premises. 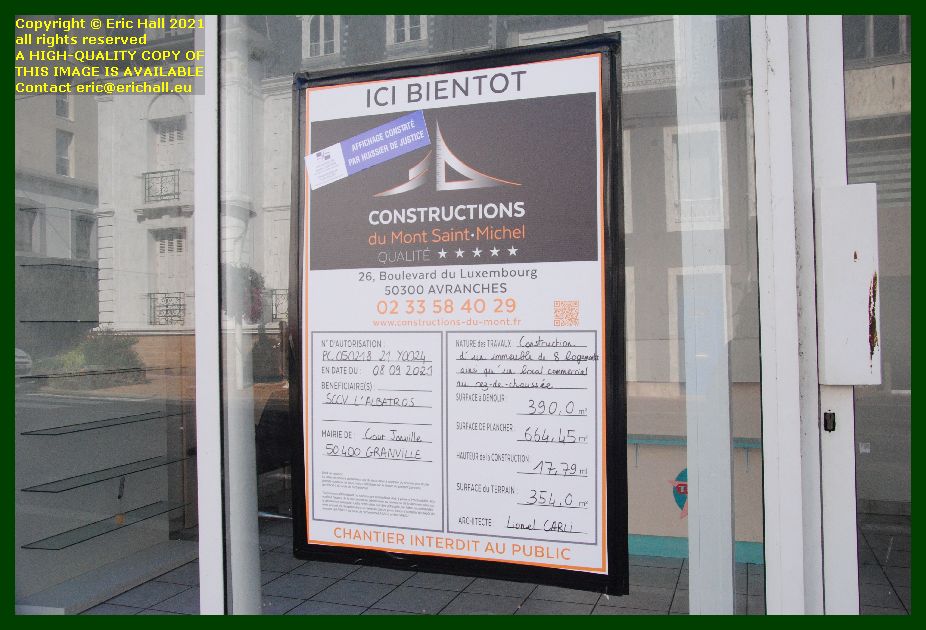 The building went up for sale a while back, but today I observed that there was a sign affixed to the window.

It seems that the building has now been sold and the new owners obtained planning permission 2 weeks ago to demolish the existing building and replace it with a building of 8 apartments with commercial premises on the ground floor.

This will be another worksite that we shall follow and see how things develop, or, in this case, how they redevelop.

At the physiotherapist he put me through my paces and I actually went for 2:08 in the cross trainer thing before I had to stop for breath. That’s about 20 seconds more than my previous best.

But the sad thing is that the cross trainer is not the street on which you walk. That’s an entirely different proposition.

On my way home I called in at the Carrefour to buy an energy drink to propel me up the hill on the way back. It was quite warm and sweaty and the drink was cold so that was even better. 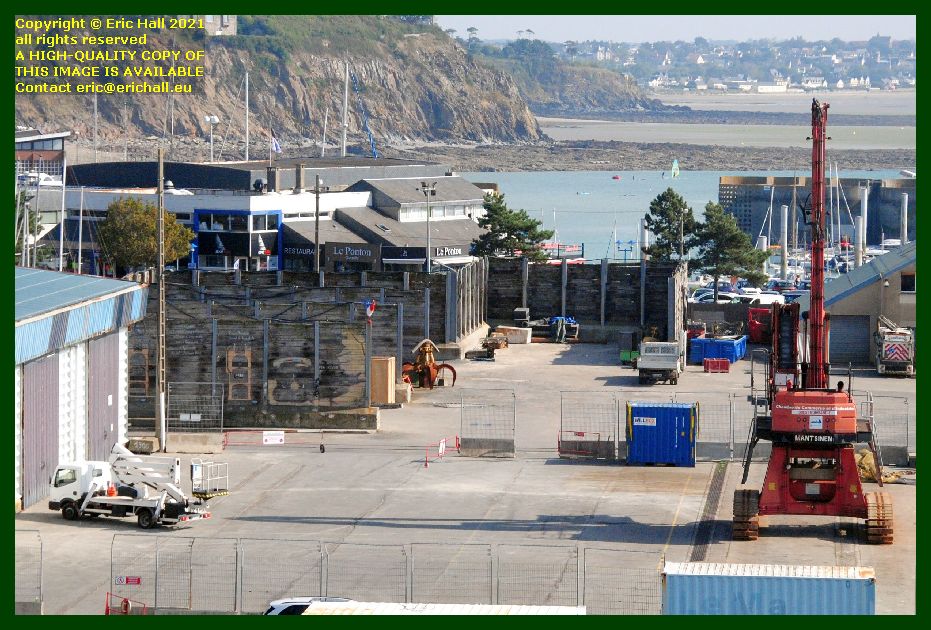 On the way back, I stopped on several occasions to catch my breath.

One of them was at the viewpoint overlooking the loading bay. Regular readers of this rubbish will recall seeing a cherry picker down there next to the crane that’s up at that end. It’s still there today, although it’s no clear what has been going on or what it has been doing.

The dark blue container by the crane is one that belongs on Mormandy Trader, by the way. She carries a few of them when she roams about, but on her last trip here (which was early Monday morning, by the way), she must have been fully loaded with other stuff. 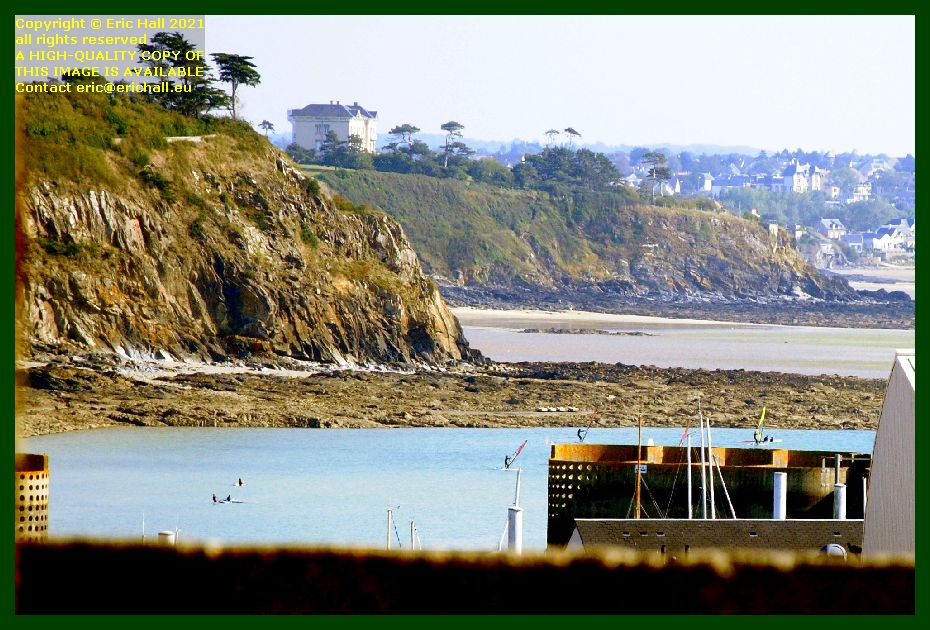 Further up, I had another stop for breath and a sit-down to attack my drink and cool off.

Over in the distance I could see that the sailing school was in action again this afternoon but to my surprise, they aren’t yachts out there but windsurfers.

They must do a little of everything there, because there are a couple of kayakers too whom I could see.

Incidentally, they are in the artificial lagoon there. There’s a wall that traps some of the sea when the tide goes out so that the people on the beach don’t have to walk miles to the water when the tide is out. 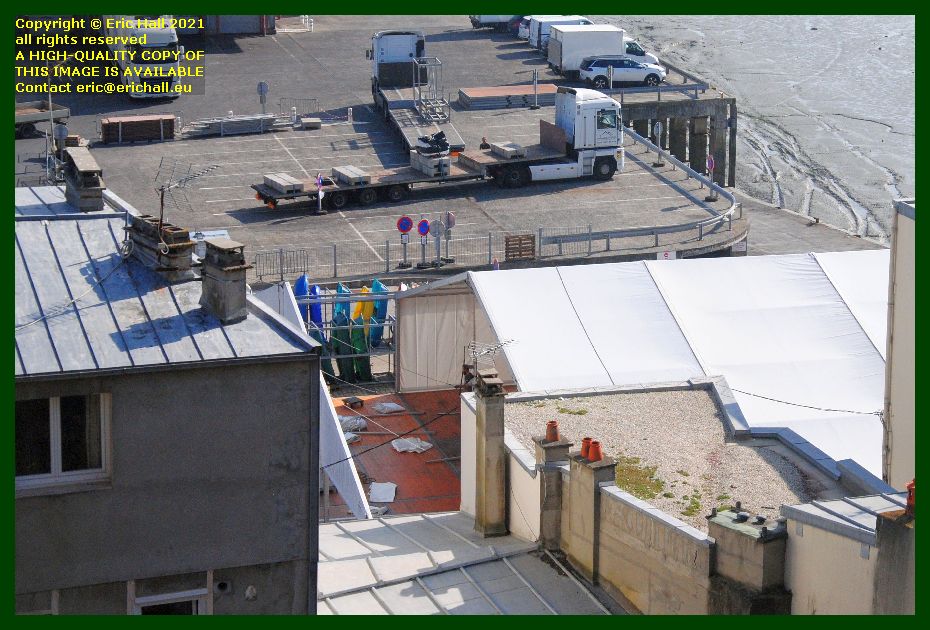 Regular readers of this rubbish will also recall that on Saturday I talked about the chicane in the Rue du Port.

As I walked back up the hill towards home I noticed that they now seem to be erecting a marquee down there now, and part of the car park at the Fish Processing Plant is cordoned off too.

So it looks as if maybe this weekend there is going to be an event taking place in the town, so I’ll have to prime myself for another walk.

It must be something to do with the Fish Processing Plant, I reckon, because there must be 100 places where they could set up a large marquee without having to interrupt all of the traffic in the Rue du Port.

The walk back up the final 100 metres of the hill wasn’t as bad as I was fearing although it would have been even better had I not been almost squidged by a car full of Bretons coming the wrong way down a one-way street. 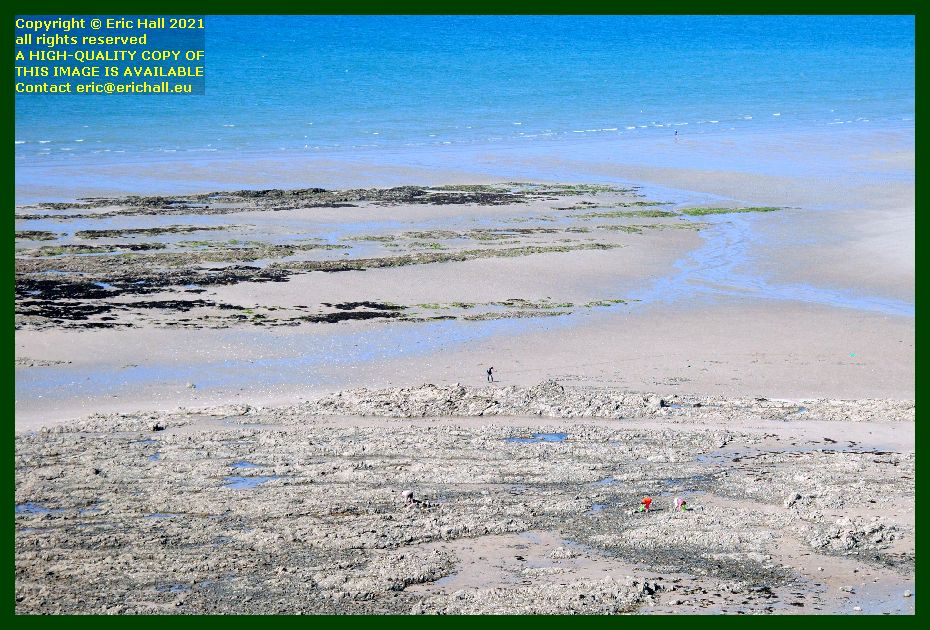 Sure enough, there were quite a few people scavenging around on the rocks down there this afternoon taking advantage of the very low tide and hoping to see what they can find.

One or two people too down at the water’s edge, although I couldn’t tell if they were scavenging for shellfish or paddling in the water. The afternoon was quite nice right now, but it wasn’t that nice. Not for me, anyway. 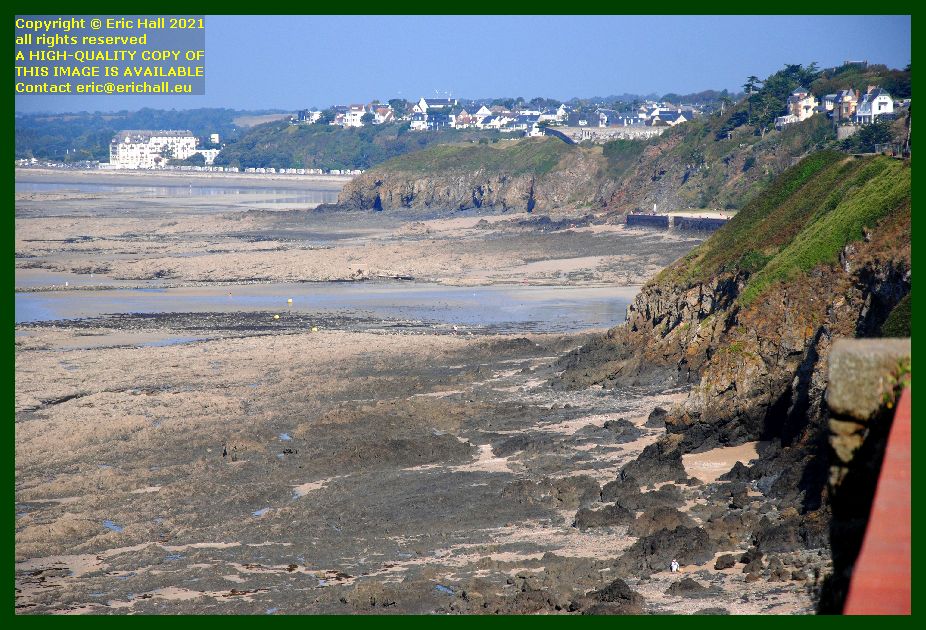 Of course it goes without saying that I went to have a look down on the beach.

Plenty of beach to be on, but surprisingly apart from the scavengers doing the pêche à pied, there weren’t too many other people there. It’s a Wednesday afternoon and the schools are closed so I would have thought that there would have been many more people down there making the most of our Indian Summer.

And I was correct about the disappearance of the beach cabins on the Plat Gousset. They were taken away yesterday morning, apparently. That probably means that the diving platform out at the Plat Gousset has gone too.

Back here in the apartment I hung out the washing and then made the dough for my next batch of fruit bread because I had the last slice this morning. And almost immediately that I finished, a neighbour came to see me and I had to go to talk to him for about 45 minutes.

After I came back there was just enough time to update a couple of earlier journal entries with the missing dream details before it was time to bake the bread.

While it was at it I stuck some potatoes and the last slice of pie in there, and then blanched the leeks that I’d bought on Monday ready for freezing.

Tea was pie with potatoes, veg, (leeks of course included) and gravy. It was very nice too.

And now that my delicious meal is over and my notes are written, it’s time for bed. Later than I was hoping. I have a whole day at home tomorrow so I’m expecting something to pop up at the last minute to disturb me.