And as regular readers of this rubbish will recall, it’s been a long time since I’ve had any.

I went to pay the laboratory for my blood test this morning and after they registered my Carte Vitale – the entitlement card for the French Social Services, they told me that I’m registered as a Maladie Grave – a “Serious Illness” case, I don’t have to pay a thing.

So as well as the nice nurses at Castle Anthrax, we now have free blood tests. This illness does have some compensations, but I’ve had to look hard in order to find them.

This morning I was up quite quickly as the alarm went off, thanks to the early night that I had, and with nothing on the dictaphone I must have had a very peaceful, restful night for a change.

After my medication I came back here to check my mails and messages.

Do any of the regular readers of this rubbish recall A PHOTO THAT I POSTED a few weeks ago? 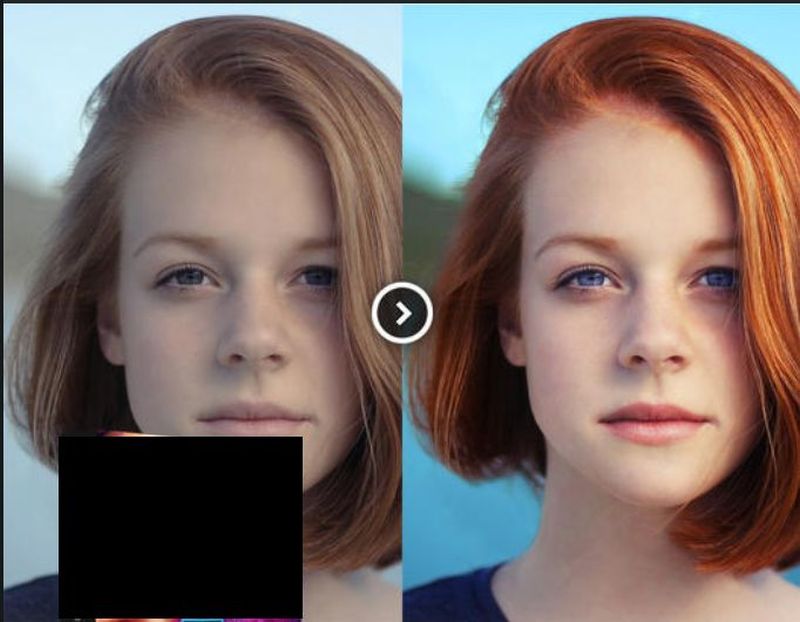 When I posted it I mentioned that the photo was being used on the internet as an advert for a piece of photo-editing software and that when the photo came round again I would post it for you to compare.

It’s definitely the same photo as you can see, so there is something weird going on here with this. I smell something fishy, and I’m not talking about the contents of Baldrick’s apple crumble either.

Having checked my mails and messages I then attacked the next radio programme. And despite a couple of stops for coffee and for breakfast, it was all done and dusted and ready to go by 11:05 and I don’t recall having prepared a programme as quickly as this one. 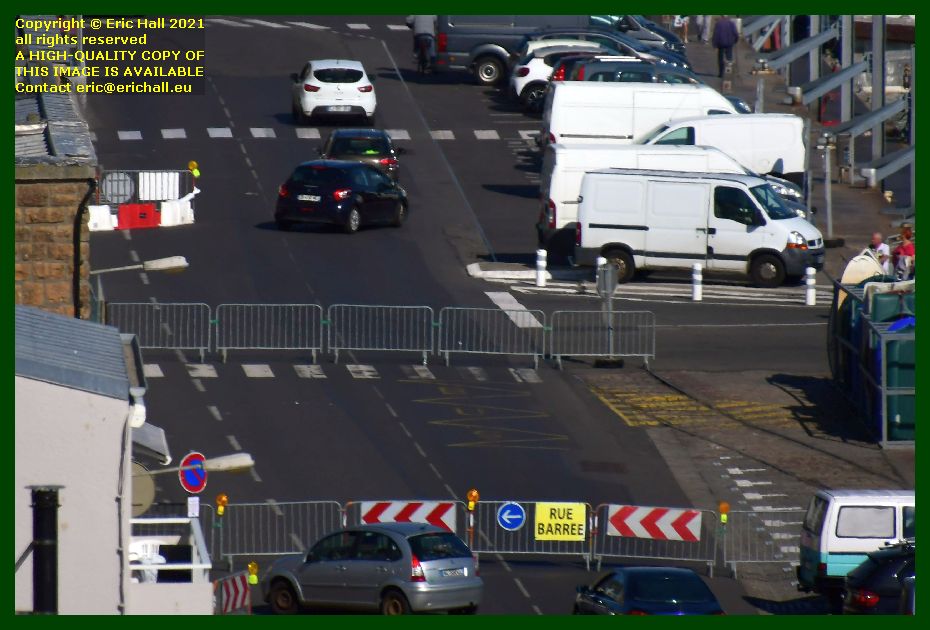 There were roadworks in the Rue du Port and so we had to go through a sort-of chicane to head into town.

What complicated the issue was that firstly I was stuck behind a grockle in a mobile home crawling along at 10mph admiring the seagulls and secondly, a coach had decided to stop there despite the narrow road and the “no waiting” signs in order to discharge his passengers.

After a couple of foul oaths and curses I eventually made it to LIDL and did a lap around the shop for a pile of stuff. And forgot to buy the syrup for the soft drinks too

The laboratory closes at 12:00 for lunch and it was 12:01 when I pulled up on the car park. I just about beat the staff to the door and I was lucky in that they agreed to see me. So with the good news about my account, I headed for home and a coffee. 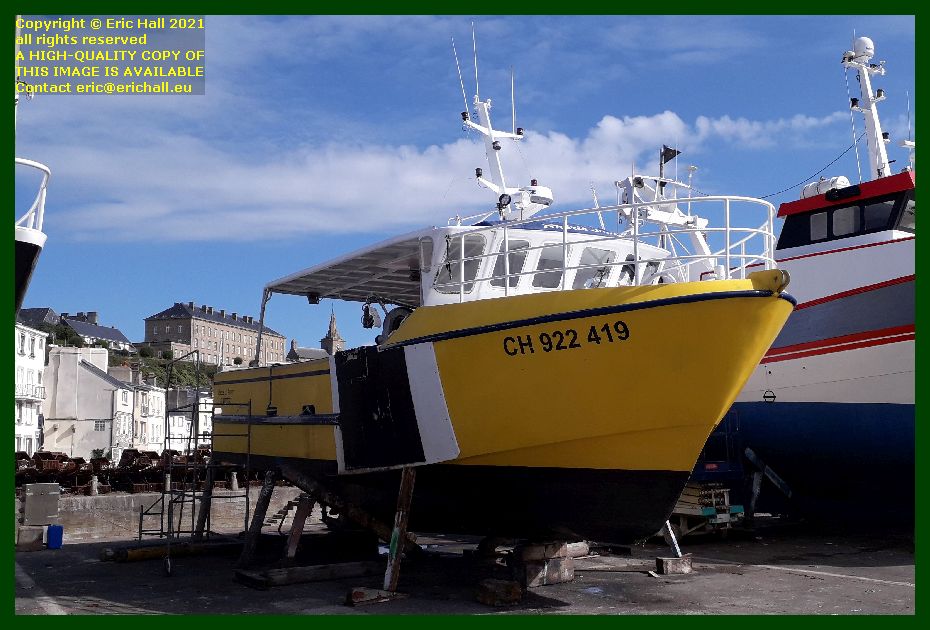 On the way out to the shops I went past the chantier naval where I noticed that there was a new occupant this morning.

On the way back I nipped into there to see if I could find her name. Actually, she’s not a new boat because we have seen her before when she was in the chantier naval a while back.

She’s one of the smaller inshore shellfish boats called Cherie d’Amour. She’s usually been seen – for the last few weeks at least – sitting on the silt in the outer tidal harbour and not travelling very far, if at all.

Ordinarily I would have made further enquiries about her but there was no-one around her to ask. 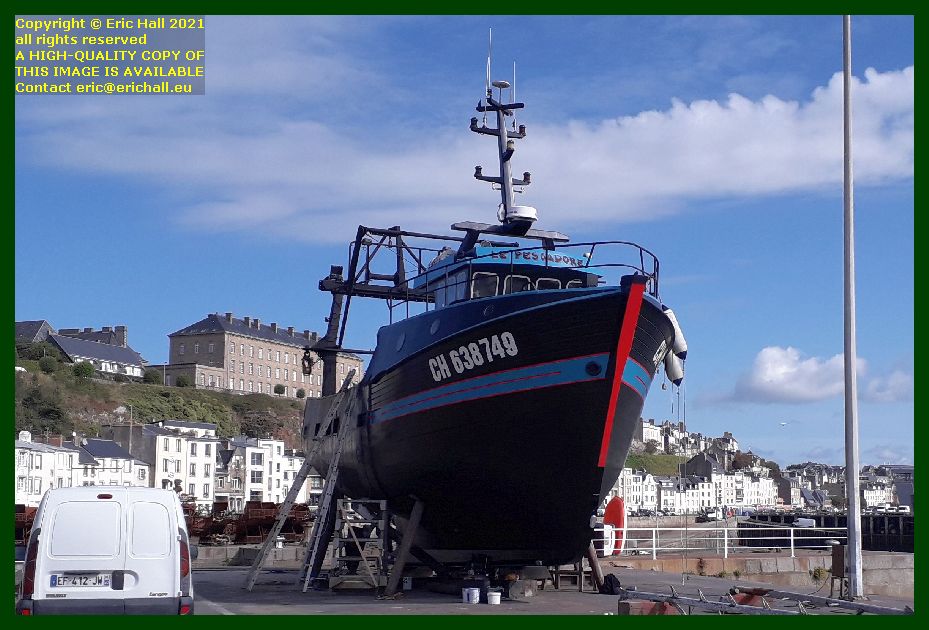 While I was there, there was another task that I had to do, one about which I’ve been talking for a while.

There’s been a trawler in the chantier naval for the last several weeks and i’ve never been able to find out her name. But seeing as the paintwork was almost finished I imagined that her name would have been painted on the wind deflector above the cabin windscreen.

Sure enough, they’ve repainted her name and I can now tell you that she’s called Le Pescadore. She’s one whom we’ve seen before although I’m not surprised that I didn’t recognise her because back then, she was painted light blue and yellow. But she’s certainly carrying the same registration number 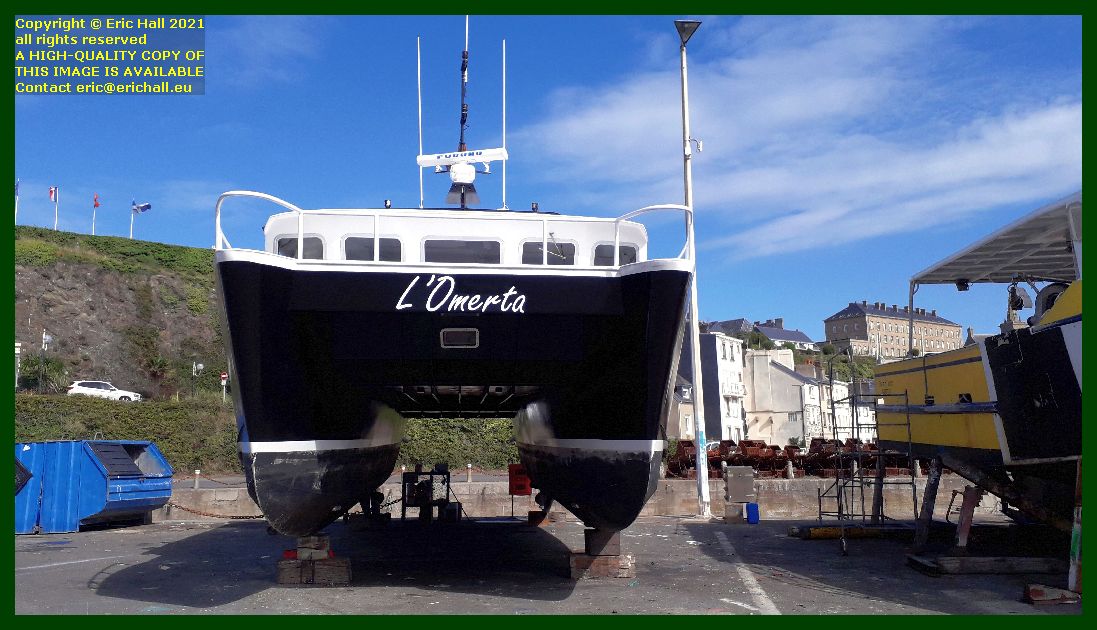 On my way back to Caliburn I went to have a good look at L’Omerta.

She’s a catamaran-type, which explains why they are happy for her to sit in the silt when the tide goes out, and I bet that there’s a really good view from that lower window when she’s out at sea.

One thing that I noticed is that she has two screws or propellors, one on each pontoon. I don’t recall having seen that on a small catamaran before.

So back at the apartment I made myself a coffee. That was a good morning’s work and it’s one less thing to worry about.

There was a huge pile of washing-up to do because I’d forgotten to switch the water back on after my return from Leuven. It wasn’t until late last night that I realised and switched it back on. And now having clean crockery and cutlery I could make lunch.

That’s the last of the bread so tomorrow morning first thing I shall have to make some more.

After lunch I listened to the radio programme that will be broadcast on Friday night and the one that I’d prepared this morning. Friday night’s is going to be a belter – a live concert from the Crystal Palace Bowl and it’s one of the best that I have ever done 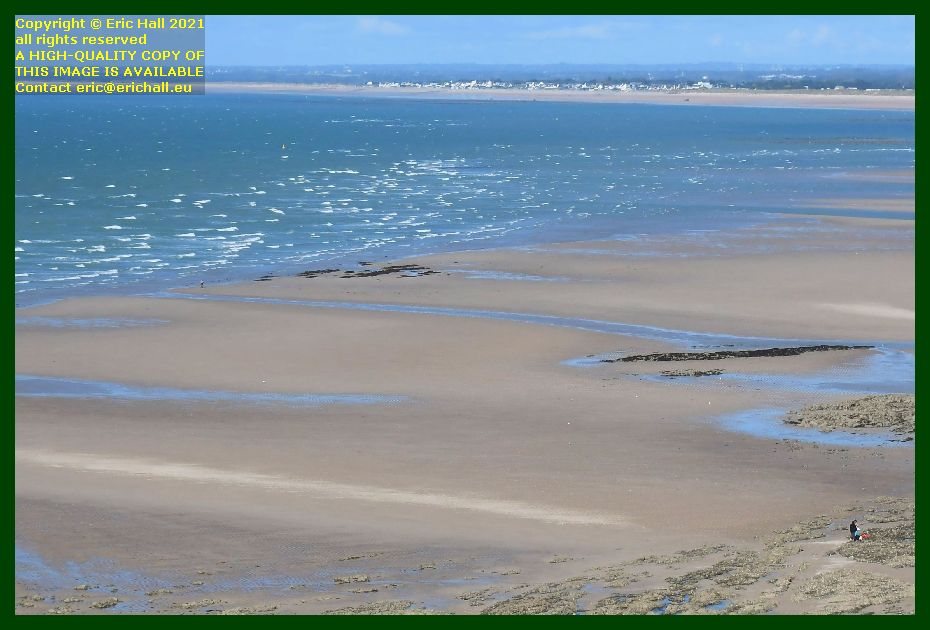 By now it was time for me to go out for my afternoon walk, so with no Nazguls about this afternoon to threaten me I could make my way safely to the wall at the end of the car park to look down onto the beach.

Down on the beach there were very few people, and that’s no surprise because despite the sunshine and the bright sky; it was howling a gale out there.

You can tell that by looking at the whitecaps on the waves as they crash down onto the beach. I know that we have plenty of wind around here, but this was one of the strongest winds that we have had for a little while. 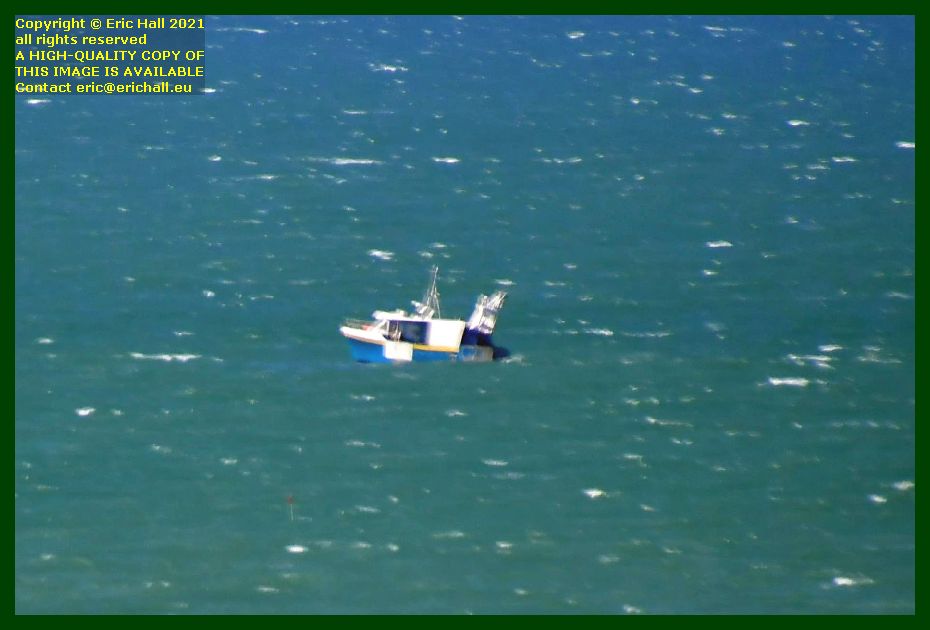 So much so that when I wwent to look out at the sea, I had to take off my cap in case it blew away.

But right out there in the Baie de Granville there was one of the smaller shellfishing boats battling away among the waves. It was having quite a battle too, trying to make progress against the weather.

There weren’t too many people around on the footpath this afternoon and none of the aeroplanes from the airfield taking to the air so I pretty much had the path to myself as I set off towards the lighthouse. 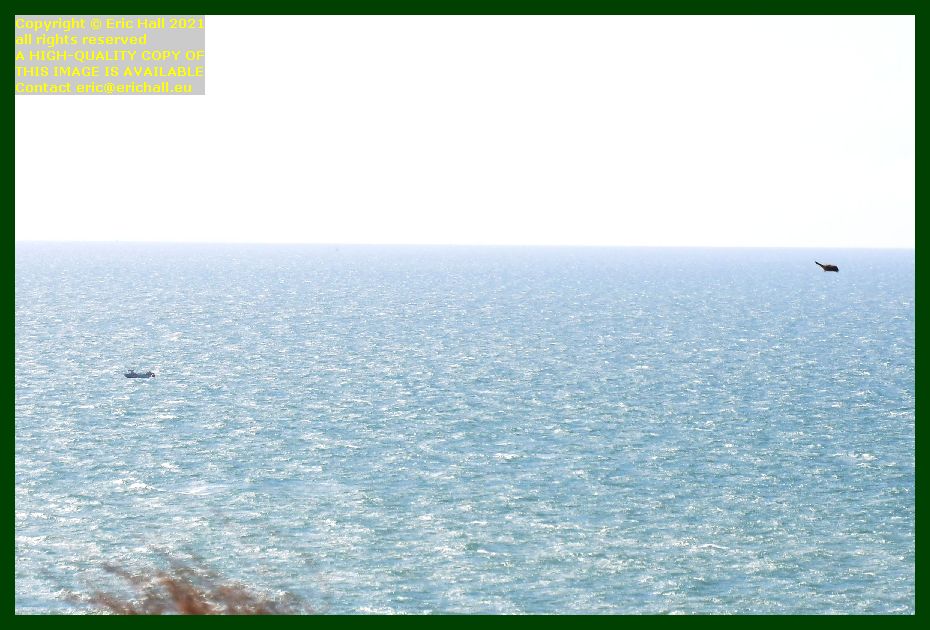 As I reached the end, I discovered that I wasn’t alone.

There were one or two people here but there was also one of our sparowhawks hovering around keeping an eye open for anything edible moving around at the foot of the cliffs. And while I was looking, he didn’t seem to be having much success.

And while we are on the subject of people not having very much success, there was a fishing boat down there just offshore. He was too far out for me to see what he was doing or if he was catching anything, but we have yet to see anyone pull anything out of the water. 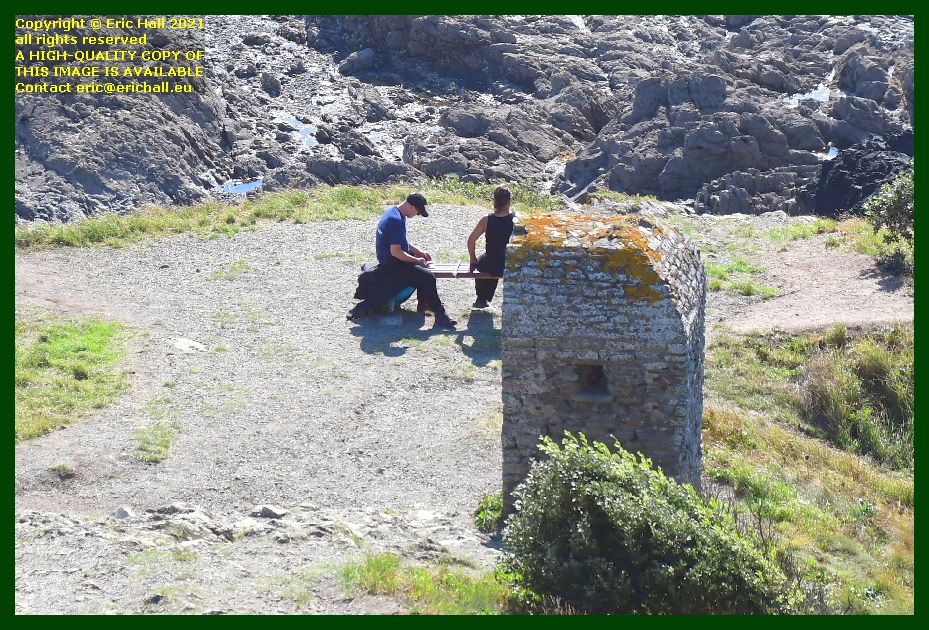 The tide was too far out for me to expect to see anyone fishing from the rocks at the end of the headland at the Pointe du Rock.

There were however two people sitting on the bench down by the cabanon vauban braving the gale-force wind although I’m not sure why because there wasn’t anything at all going on out there this afternoon.

By the looks of things they were picking up messages on their mobile phones, but I’m sure that there must be plenty of other places nearby that are much more comfortable than down there to do it. 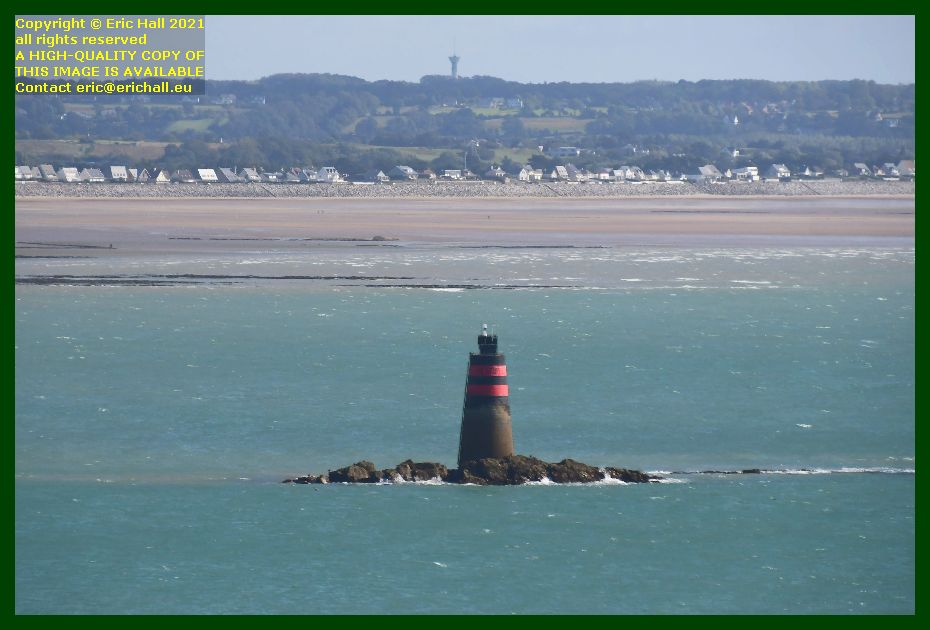 A little further on around the headland I could have a really good view of Le Loup, the marker light on the rocks at the entrance to the harbour.

The tide is out so we can see the rocks upon which the light sits, but we have also seen it when the tide has been right in up to the upper of the two red rings, and we can see the tide mark that is the more usual level of high tide.

In the background we can see the beach at Kairon Plage. It looks like quite a nice beach, which it is, and there are quite a few people on it too. The headland here at the Pointe du Roc acts as a windbreak so that it’s not as cold over there as it is here. 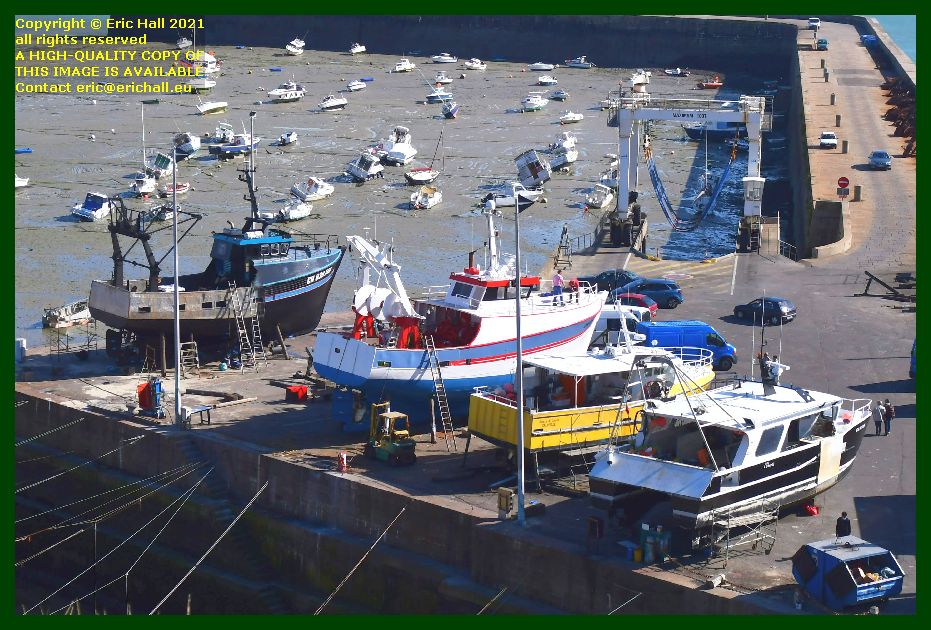 Further on along the path I came to the viewpoint overlooking the chantier naval.

We can see all of the four boats that we noticed this morning. From left to right we have Le Pescadore, Catherine Philippe, Cherie d’Amour and L’Omerta. Only four boats down there, which is a far cry from the heady days of a couple of weeks ago when we had no fewer than seven.

There are plenty of vehicles down there so it seems that there is plenty of work going on with the boats. I’m half-expecting to come down here one of these days soon to find that another one or two boats have gone back into the water. 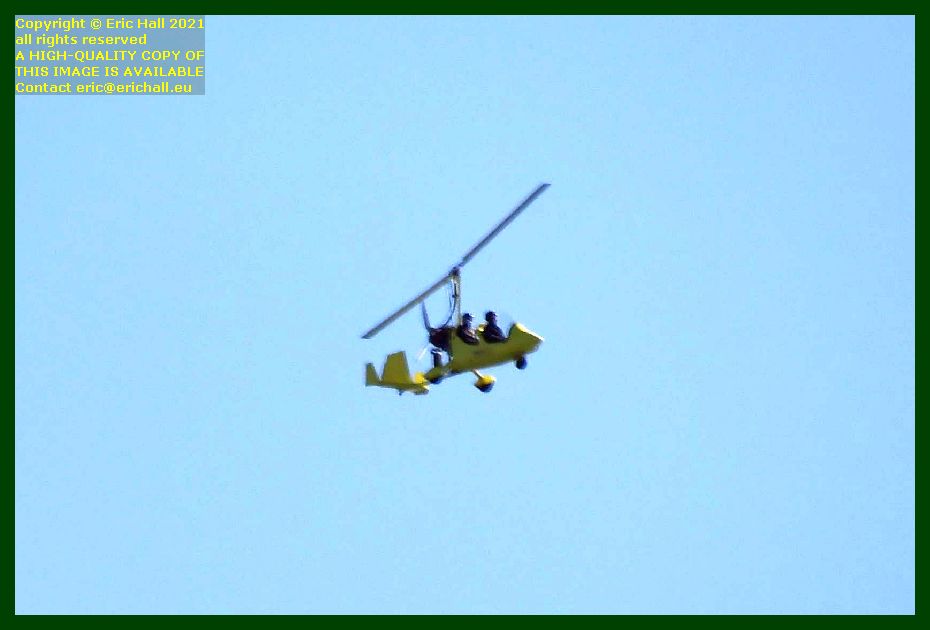 While I was looking down at the chantier naval, I was overflown.

In fact, I was wondering if I was going to see some aerial activity (apart from the sparrowhawk of course) with there being no Nazguls, no aeroplanes from the airfield, and too much cloud to see if there were any full-size aeroplanes going past at 35,000 feet.

However I was not going to be disappointed because rattling past overhead on its way back to the airfield came the yellow autogyro that we see quite often. And he was making heavy weather of the trip back, fighting his was through the headwinds. His rotor was going round at 13 to the dozen but he was barely inching along. 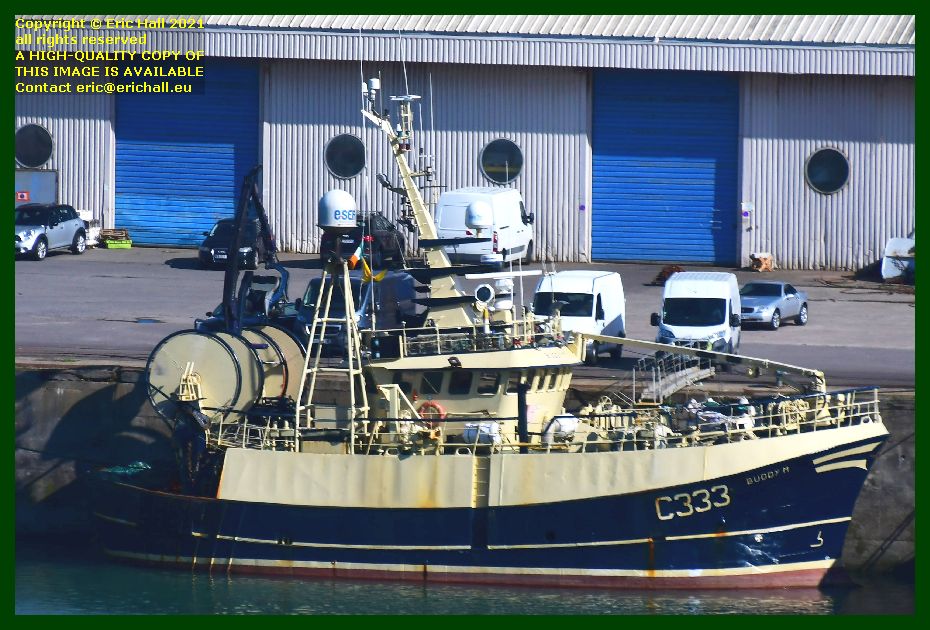 On the way home to the apartment I noticed this strange trawler moored in the inner harbour.

She’s one whom I haven’t seen before so I had to make a few enquiries. She’s called Buddy M and she’s arrived here earlier this afternoon from her home port of Cork in Ireland.

Tomorrow morning I shall have to check the newspapers to find out why she arrived here because it’s a pretty strange voyage for a trawler like this to undertake.

Back here I made myself a smoothie and then spent another while sorting out some photos from several years ago until it was time for tea.

At the shop this morning I’d bought a pepper and some mushrooms so I made myself another really nice stuffed pepper – and to do the washing up again now that I have mor ehot water.

And with my notes now written, I’m off to bed. I have bread to make tomorrow and a Welsh lesson too, so I can’t hang around.