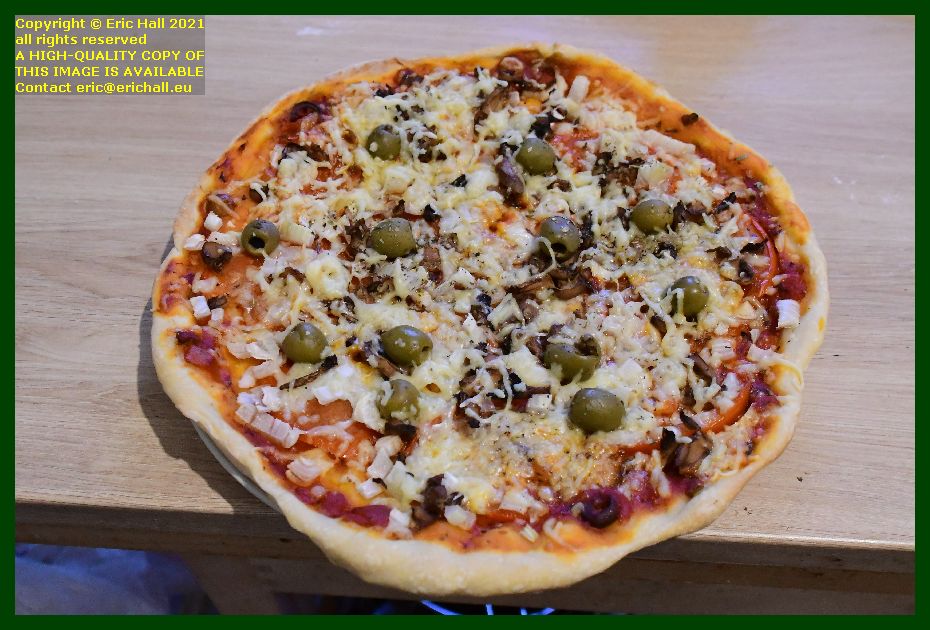 … of the nicest pizzas that I have ever made.

Surprisingly I can’t think what I did to it to make it any different from the usual. The diced peppers that were left over from several weeks went in the bin as being unfit for human consumption and as I had no fresh mushrooms I used tinned stuff, sticking them in the oven to dry them out.

That was about all that I did that was different but whatever it was, the results were all that counted. No complaints there.

Last night I didn’t go to bed until quite late because I couldn’t find the energy or the motivation to leave my chair. But once I did go to bed I went straight to sleep and stayed there until … errr … 07:30. 6 hours sleep on a Saturday night/Sunday morning is not very much but it shows just how much I slept during the day yesterday.

Even so, there was no danger of my leaving the bed at that time of morning. I went back to sleep and stayed there until 09:20. Even that was quite early for a Sunday but if you can’t sleep, you can’t sleep.

After the medication (when I forgot what medication that I’m supposed to be taking) I came back in here to listen to the dictaphone. I was looking at apartments last night, either to rent or to buy. During the furniture removal that we were doing we were stationary and someone backed into us. There were a whole kind of problems that didn’t involve me because I wasn’t the driver of our vehicle but we were talking about this to a few people and they were surprised that there was even a dispute about it. Anyway we were something going on and I went over to one of the other estate agents who was letting the apartment on behalf of Pozzo. They had the keys so I went to see it. It was strange, an open-plan apartment and had no walls. You looked over the balcony straight down into the hallway. I thought that this was the coldest apartment that there ever is going to be. It was nice but I couldn’t get over the idea of having no walls. In the end I came away. I was with a former friend. We wanted an Indian meal so we looked around. There was this really posh hotel-type place. Finding a place to park was the 1st thing. Then we had to walk to try to find a waiter. There were dozens of them, all done up in buttoned jackets looking like something out of a 18th Century novel. Just as we were about to ask, I awoke.

Later on I was with a group of people and we were at that hotel and left all out clothes there. We had the bill for 4 coffees and it came to something like £299:00. We wandered off into the streets of Glasgow. We had somehow become separated in some roadworks and I could see them disappearing away. I was trying to catch up but there was all kinds of obstructions and road works and people on bikes in my way and I couldn’t catch up. In the end I found myself on a demolition site with all old apartment blocks in the real back-end of Glasgow. I was having to scramble over scaffolding and everything. First of all I couldn’t remember the name of my hotel, and secondly I couldn’t even work out where I was. The map that I had wasn’t much help. I wasn’t even sure which side of the Clyde I was on. Eventually I came out and I was on top of a hill going through a small village. Down in the valley I could see a river and a railway line. I thought “if I can get down there I can probably work out where I am and maybe catch a train back. We were so high up that I couldn’t see how I was going to get down this slope to get into this valley where this river and railway line were.

Once I’d done that the next task was to pair up the music for the radio programme. That didn’t take me all that long and by the time that I was ready to stop for lunch it was all out of the way.

After lunch there were several tasks that needed my attention.

Firstly, the ice-box in the fridge had frozen up so I emptied the fridge and switched it off. A week or two ago Liz had given me some old towels and what with the lino that we laid a few weeks ago, I had everything that I needed and basically the job took care of itself.

When it had defrosted completely I washed and cleaned it, sorted out the food, washed and dried the shelves and then reassembled it. And there seems to be much more room in there than there used to be.

Earlier on, I’d transcribed the other dictaphone notes from when I was away and then turned my attention to FRIDAY’S JOURNAL ENTRY that I had missed. 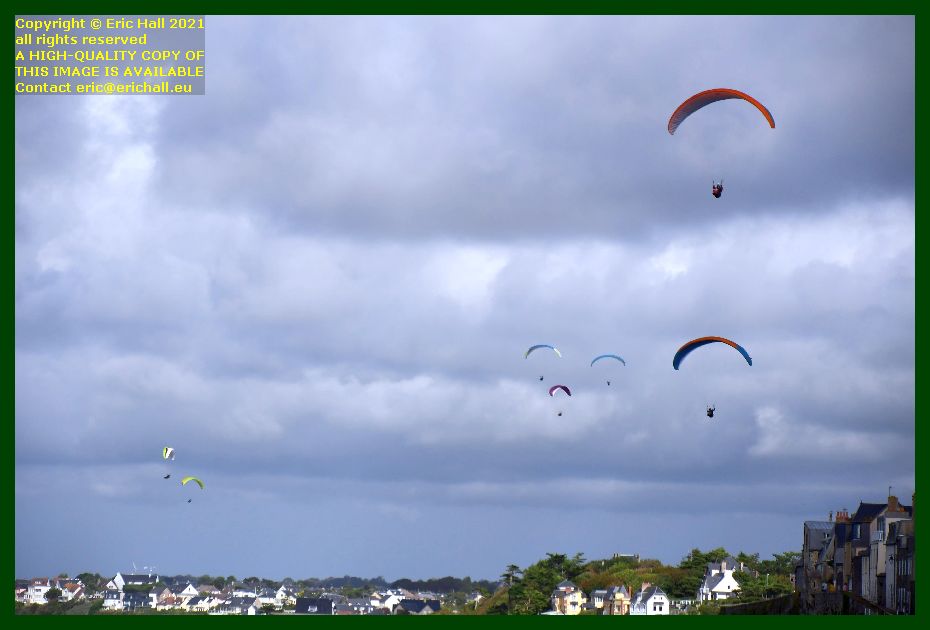 There were several breaks in my afternoon routine, including, as usual, the walk around the headland.

But I had hardly set foot out of the building before a squadron of Nazgul took off from the field next to the cemetery and started to head my way.

“Almost perfect timing” you might think, and having read Lord of the Rings

as many times as I had when I was nought but a pup, it was somehow rather unnerving watching them head my way.

Probably the same feeling that Frodo and the others had as they were on their way to dispose of the Ring and the Nazgul appeared. 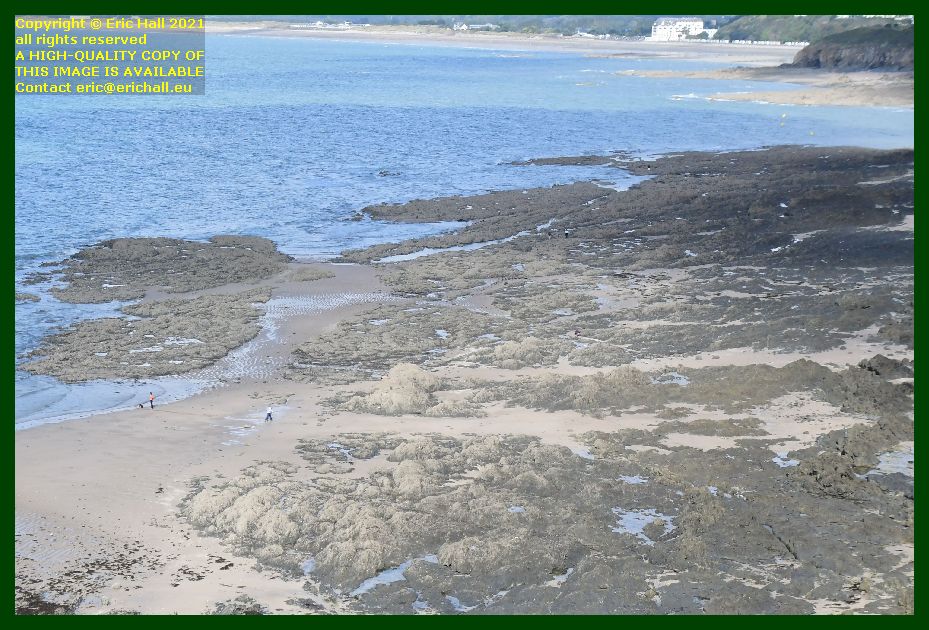 So having managed to escape the wicked clutches of the Nazgul, first stop was at the wall at the end of the car park to check on the beach to see what was happening down there.

With it being a warm but cloudy day, I was expecting to see the crowds down there making the most of it but, surprisingly, it was quite empty. There can’t have been more than a dozen people down there, and there wasn’t anyone that I could see in the water.

With it being one of the last weekends of the summer, I should have thought that the madding crowds would have been down there this afternoon 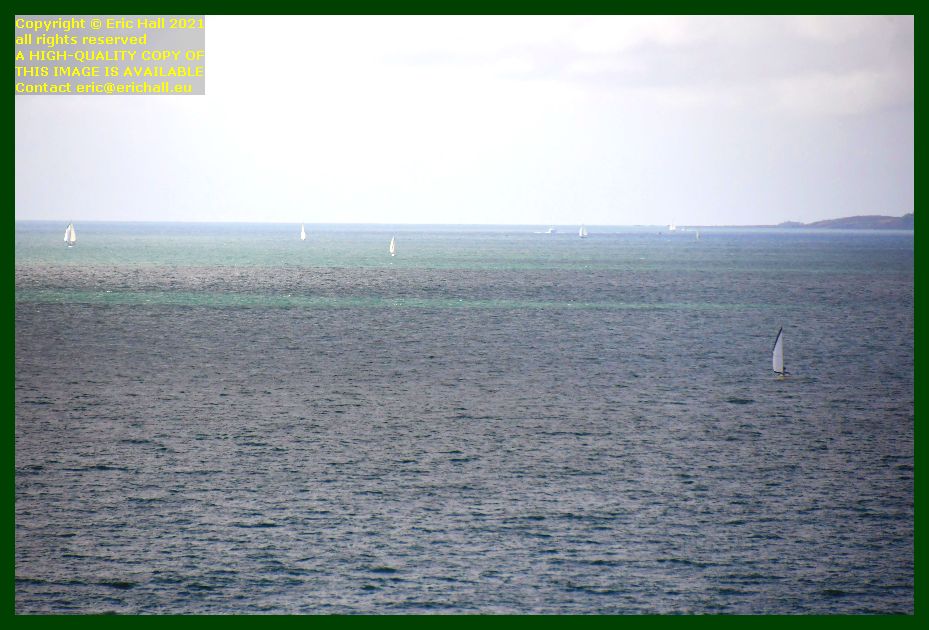 They may not have been down there on the beach, or even on the path around the headland, but in the gap between the Ile de Chausey and the mainland there were plenty of people.

Here are just some of the yachts that were out there this afternoon. There were probably three times as many as this all told.

In the middle of all the yachts there was something fairly large moving quite quickly towards the mainland. When I returned to the apartment later I enhanced the photo and blew it up, and I could see that it was one of the Joly France ferried coming back from the island.

Unfortunately it was too far out for me to tell which one it was. 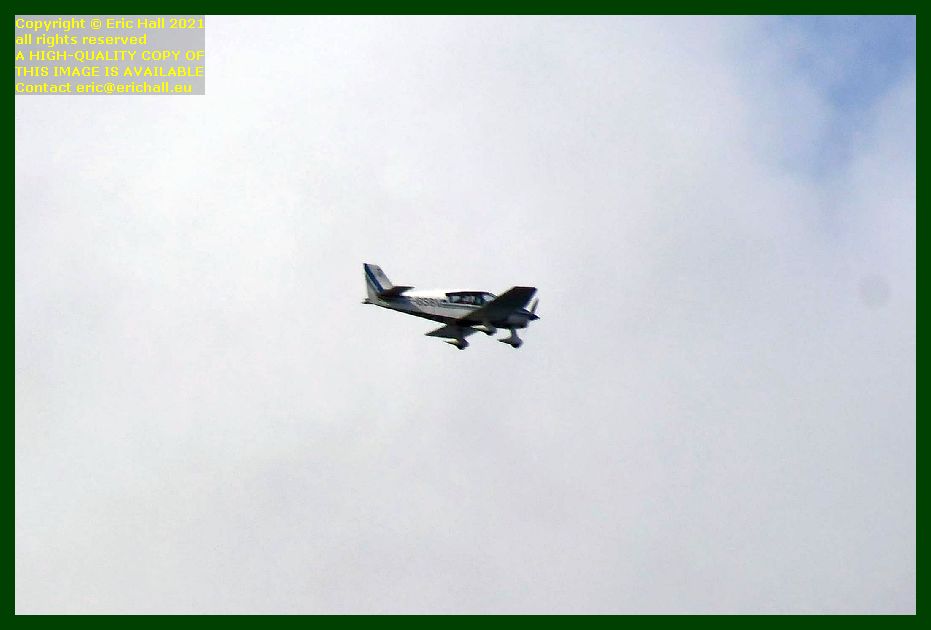 While I was out there, I was overflown by a light aeroplane going by towards the airfield.

She’s described in their literature as “a good aeroplane for travelling and is ideal for 4 passengers and their luggage to travel all around France and Europe”. And so today she took off from the airfield at 16:10, did a quick lap around just offshore and came back in to land at 16:24.

Not exactly the “all around France and Europe” as they advertised. Mind you, she did take off half an hour later and was airborne for almost 35 minutes. 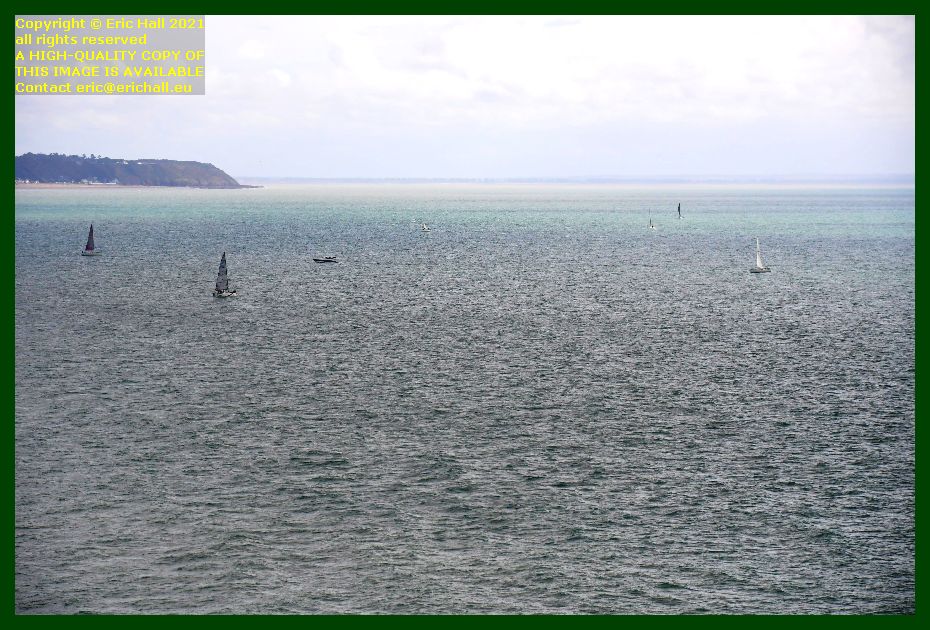 And out here in the Baie de Mont St Michel there were just as many pleasure boats as there were on the north side of the headland.

Here, we have a fine collection of yachts, a cabin cruiser and a small motor boat. And plenty more of them out of shot too.

There looked to br a rainstorm brewing up down at the foot of the bay near the Pointe de Carolles too, but luckily the wind was blowing from the north-west so it was pushing the rain farther to the south. 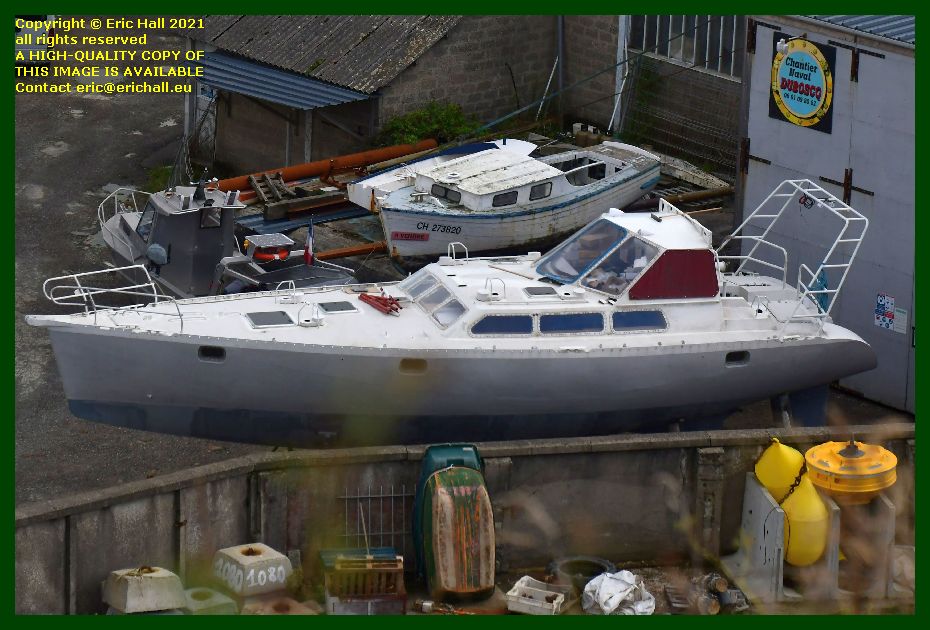 Here is something that we haven’t seen for a couple of weeks.

There is this big yacht that’s been in the compound of the chantier naval for quite some considerable time and doesn’t seem to have moved at all.

It’s all been masked off and there has been some primer applied with a spray gun, but the work seems to have run aground because I can’t see that any progress has been made for several weeks.

The summer season is now almost over so I don’t suppose that they are in too much of a rush to complete the work. 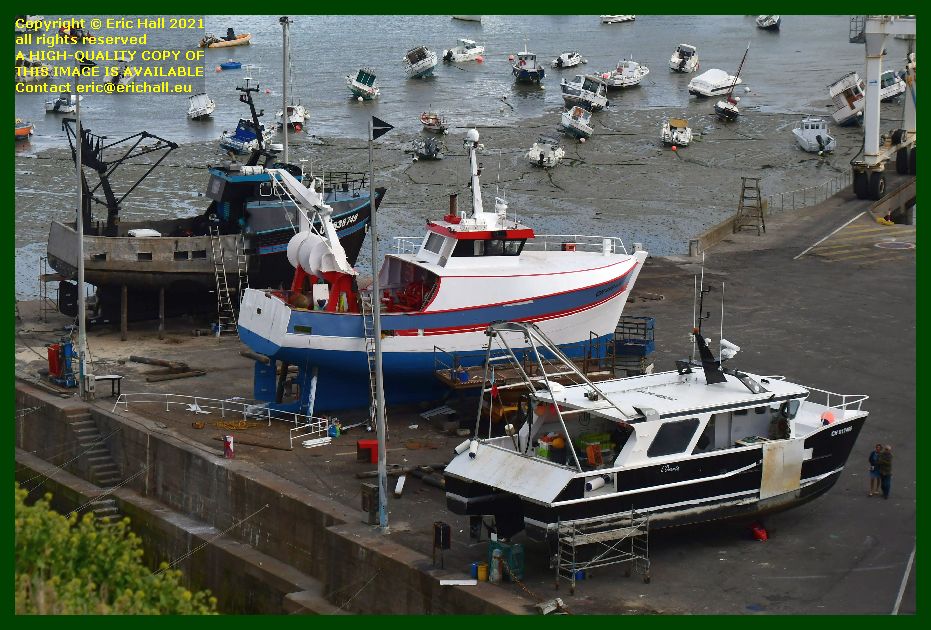 In the main area of the chantier naval, there has been quite a lot of activity while I was away in Belgium

The trawler Saint Andrews has gone back into the water leaving just the unknown black trawler, the trawler Catherine Philippe and L’Omerta, the shellfishing boat.

By the way things are looking, they aren’t going to be around there for long. The paintwork on all of them looks quite fresh and so they’ll be back in the water quite soon.

Although I do remember having said that sort of thing on several occasions in the past and been made to eat my words. I can see me doing the same with these three. 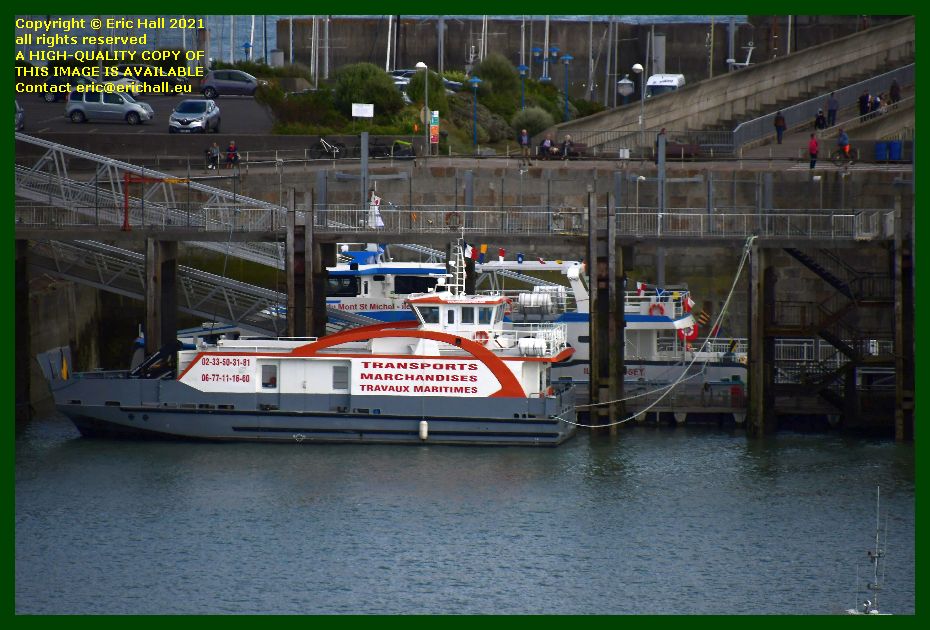 Before I headed back for home I had a look out across to the ferry terminal.

Over there is the little freighter Chausiaise, tied up to the outside of the terminal. Behind her is the very new ferry Belle France. The other two Joly France are out at sea and we saw one of them just now.

Back in the apartment I finished off the cleaning of the fridge and filling it up, and then I kneaded out the pizza dough, rolled it out and put it in the pizza tray to proof for an hour or so.

When it was ready I assembled the pizza and baked it ready for tea.

Now that I’ve written out my notes I’m going to bed. I have the radio programme to prepare tomorrow and then go to the shops for some fruit and veg before lunch because there isn’t anything here to eat as far as fruit goes.

One or two other things too, so I’ll be going in Caliburn. I’m not really up to going on foot.