… expected that I would have learnt enough about tempting fate about my postings.

“An early night” I said. “Fighting fit for tomorrow” I implied. Well, quite. Not even the usual good-old reliable stand-by of watching an old black-and-white film of the dozens that I have downloaded from THE INTERNET ARCHIVE for copyright-lapsed media and many other similar sites, something that has worked WITH MONOTONOUS REGULARITY AND RELIABILITY in the past

In fact I’d watched 2 films and there wasn’t even the vaguest possibility of sleep.

What was happening was that a pain developing in the very region that they had mentioned. And as the evening, and the night had worn on it became worse and worse. Why I hadn’t worried about it at first was because it was a pain that I’d had before and had eventually gone away all on its own.

And I hadn’t mentioned it before in these notes because it was rather a delicate subject.

By 04:30 the pain was indescribable and eventually I succumbed. In all my life I’d never had a pain quite like this. The nurse told me to wait for an hour while she monitored it and as there was no amelioration she called the night doctor.

He had a look and a poke around, and the next thing was that a porter turned up and whisked my bed off to the operating theatre. And after a considerable amount of moving about and swapping rooms, they eventually found where I was supposed to be.

The surgeon was only a young girl but she tried a trick or two first, none of which worked so I was moved yet again. She came along as well, I suppose because I did see her later. But when I arrived, it was just about 08:30. I was undressed and someone clamped a mask over my face. “Have a whiff of this” he said.

The next thing that I remember was that it was 12:35 and I was in the post-op room. “When can I go back to my room?” I asked. “There’s an important football match at 13:15”. And there was too. Pen-y-bont v Y Drenewydd in the other European Competition qualifier. “Later” replied a nurse.

Had I known and had anyone said, I’d have taken my phone with me to watch it down there because by the time that they had monitored everything and the blood transfusion had finished (blood count down yet again to 7.5 despite yesterday’s transfusion) and a porter had come to take me back, I was just in time to watch the final 30 seconds of the game.

Y Drenewydd won the match 1-0 so we are all set up for an intriguing final with Caernarfon for the last place. The 6th and 7th teams have knocked out the 4th and 5th. These two clubs are quite equal but I think that Caernarfon are playing at home and they have that certain little something.

So that’s the Kiss of Death duly given then. 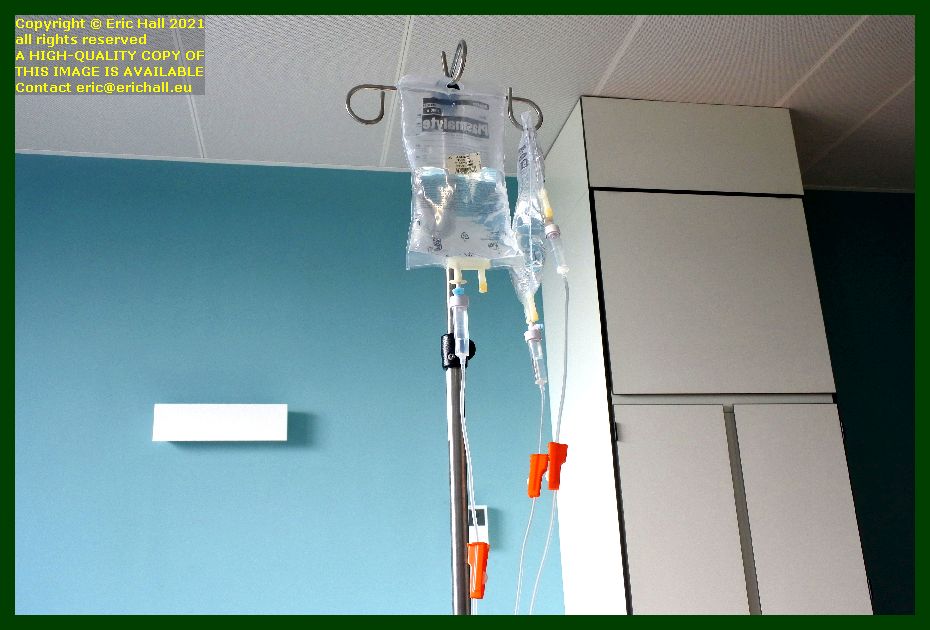 So here I am in my room with a pile of intravenous drips on the walkie thing. And that’s not all because there are another couple … errr … elsewhere and I’m not photographing them. You’re probably eating your meal or something right now.

Down below I’m all bandaged up and I’m confined to bed, so the nurses are pretty safe at the moment. My request for a gondola’s pole so I can punt my bed around the hospital corridors in hot pursuit has been denied which is a shame.

This would be just the ideal moment for Castor to come along and put in an appearance, enter my bubble and soothe my fevered brow. And wouldn’t that be nice if it were ever to happen. But it’s not unfortunately so I shall have to cope on my own which is a bit miserable. 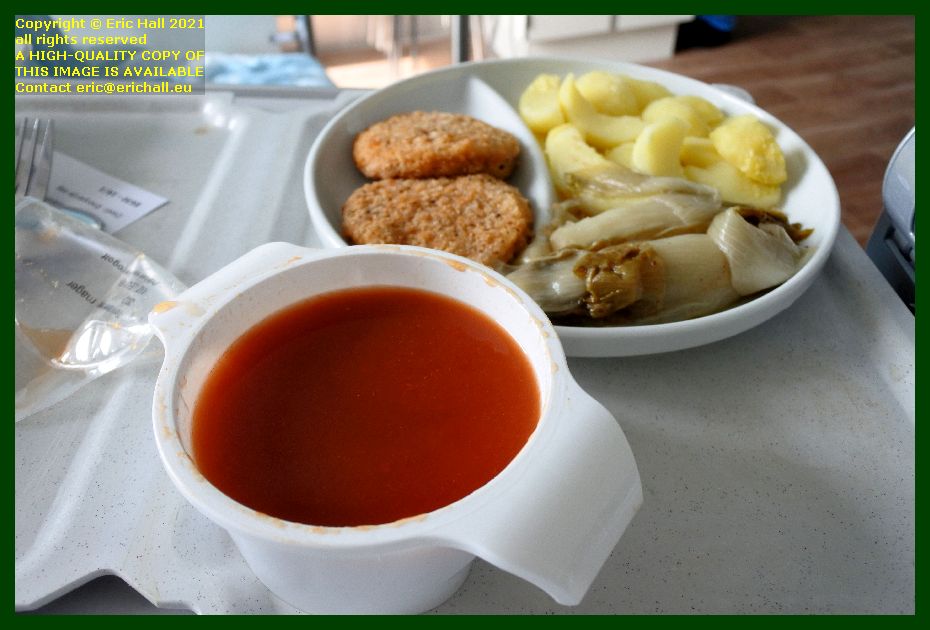 At least the food here is better than at that dreadful doss-house in Riom where they served me up half a plate of overcooked courgettes that time.

Tonight’s tea was a couple of small breadcrumbed quorn burgers of the type that I once bought in NOZ, with potatoes and endives. With tomato soup to start and although I couldn’t eat the dessert (a milky chocolate dessert thing) the nurse brought me a bag of crisps instead.

The issues with the diet by the way are due to the fact that both the dietician and cute Kaatje who says that she is my social worker but is really my psychiatrist (all terminally ill patients have a psychiatrist allotted to them) are on holiday until Tuesday.

When it all went quiet I made up a playlist of my favourite albums so I’m surrounded by some really good music, I’ve had internet chats with Esi and Alison, internet chats with Rosemary, Liz (whom I’ve convinced that my suffering is worth at least 2 cakes) and TOTGA as well as a few others, friendly nurses who run off and bring me bottles of Sprite and packets of crisps, and reasonable food, a comfy bed and some peace and quiet.

What more could any man desire? Apart from TOTGA, Castor and Kaatje to bubble up and soothe my fevered brown of course.