This morning first thing I uploaded another pile of Nova Scotia pages and I’ve now arrived at Halifax.

The Halifax pages have been on line for quite a while, and so the next step is to go to Truro and then the Stellarton/Port Glasgow conurbation.

If that wasn’t enough, I sorted out the music and wrote part of the script for the Radio Tartasse rock programmes that we do. Yes, everyone is having their money’s worth.from me today.

In the shower room, I’m ahead of myself and doesn’t that make a pleasant change for once?

Just the plasterboard on the wall at the head of the stairs and around the window to fix now – all the rest is installed and the wiring is exactly where I want it, which also makes a change.

The gaps between the window and the wall on both the outside and the inside are now sealed too and that Ryobi Plus One mastic gun is an impressive piece of kit, that’s for sure.

I must buy myself one of those without any doubt. 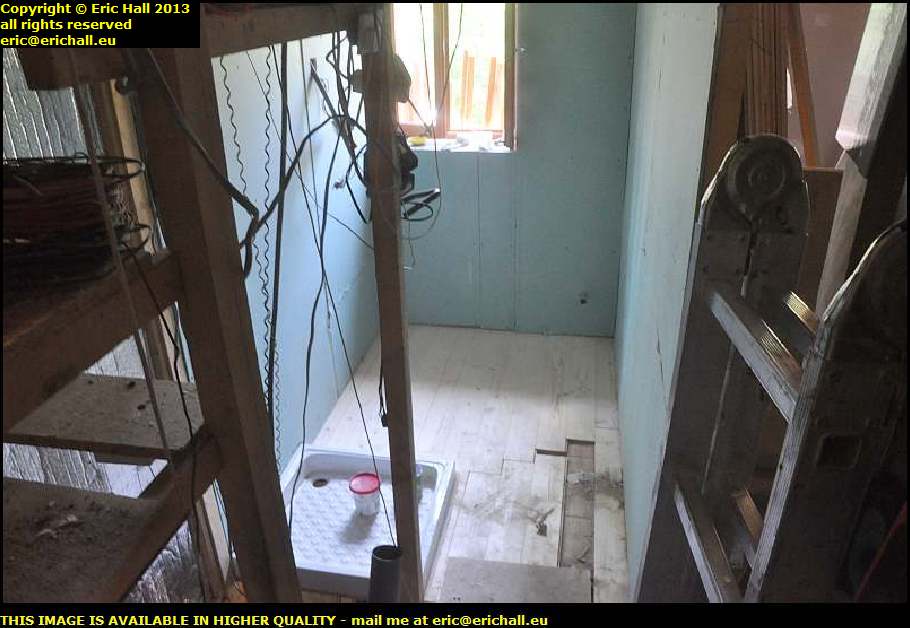 But where I am ahead of myself is that the shower tray is installed and fitted.

With two layers of flooring, I cut out a square in the top layer with the circular saw (and that took ages to get the correct shape – in places I had to use the drill and chisel) and then I had to drill a big hole in the second layer of floor to pass the drain through.

I didn’t have a hole saw big enough for that and so I cut four smaller holes in a cloverleaf pattern and with the jigsaw cut out the bit in the middle.

And then I lined the hole with the plumbers mastic that Terry gave me, dropped the shower tray in, and then sealed it off all round. It really looks impressive – seeing a shower tray in the shower room.

I had a good chat with Rachel and with Cécile on skype this evening and I won’t be doing much more as I’m whacked.

When that’s in, I can measure up for the tiles.