… that 2020 had finished. That was one difficult year and the first time that I haven’t been to North America for I don’t know how long.

And in case you are wondering, which I’m sure that you aren’t, I’m not convinced that 2021 is going to be much better.

At least we started off on the right foot because despite not going to bed until about 02:00 this morning, I was up and about, with no alarm, at 09:30. A few more days like that will suit me fine but I shan’t be having them.

After the medication I came back here to listen to the dictaphone to see where I’d been during the night.

My friend from the Saone valley and his friends came to visit me during the night. I was in Virlet – or what passes for Virlet and I was very embarrassed when they saw the kind of state in which I was living. I was trying to interest them in things like the radio telescope in the valley down below. The he asked where all of my CDs were even though they were in plain evidence all over the walls. It was a very strange meeting and wasn’t exactly how I intended it to be or thought that it would be. They stayed for a while and all cleared off again. I shook my head and couldn’t see the point of that and what was going to happen next.
But next I had to leave the house and I was in the van. Part of this area was a building site round by Joey the Swan in Crewe. One of the ways to get up where I was was to reverse back up the hill past these half-built houses and reach the main road that way, or the 2nd thing to do was to cut through one of the driveways and onto the main road through the back of one of the drives. I must have driven and reversed up and down that road 3 or 4 times trying to work out which would be the best drive to go up. There was one but for some reason I kept on overshooting it and ending up in one that was more unsuitable.

Apart from that, I had a half-hearted go at doing my Welsh homework and at least that’s now up to date. Apart from that I’ve done nothing at all. Even for lunch I just had a slice of toast. 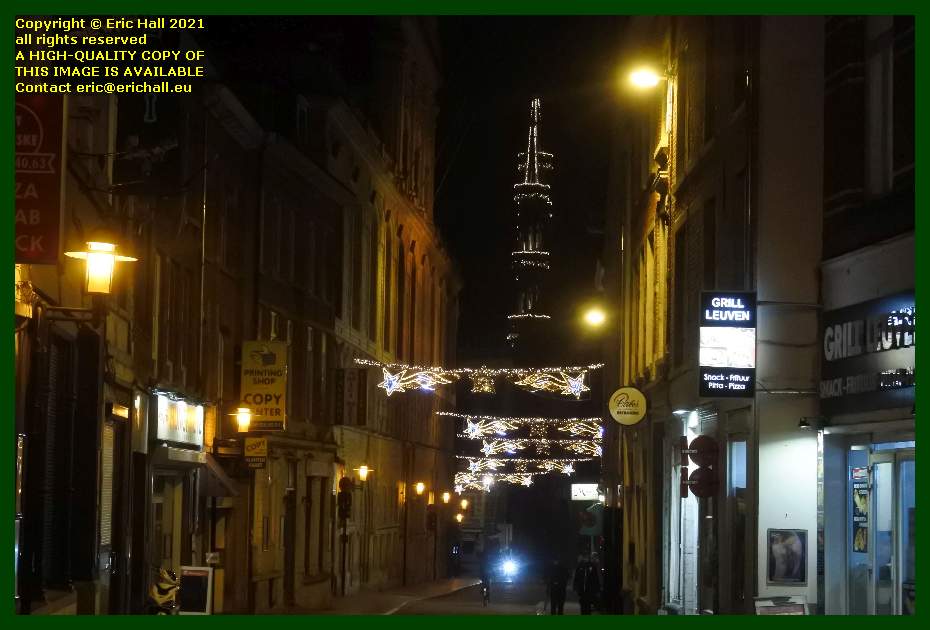 Yesterday I remember saying that I would go out this evening to inspect the Christmas lights that I hadn’t seen yesterday when I walked though the city on my way home.

At least, later on after it had gone dark I managed to tear myself away from whatever I wasn’t doing and headed off into the freezing cold . I ended up in the Naamsestraat to see what the decorations were like, and as you can see for yourself, they are pretty depressing.

At least the lights wrapped around one of the towers of the town hall provide some kind of relief to the start environment. 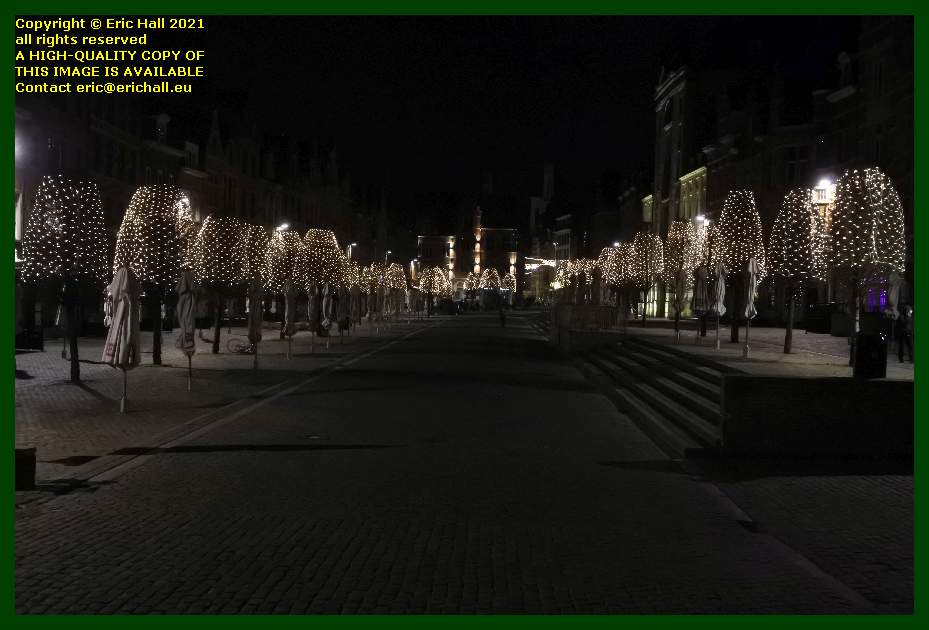 From the Naamsestraat there are several little alleyways that lead on down to the Oude Markt.

The Oude Markt is, in more normal times, the centre of café life in the city, crowded with people even in the middle of winter and in the past there have been some really beautiful and impressive Christmas lights here. But while these look quite nice, they aren’t a patch on what we’ve seen in the past.

A real sign of the times right here and now is that there isn’t another soul in the image this evening apart from someone on a bicycle heading my way. 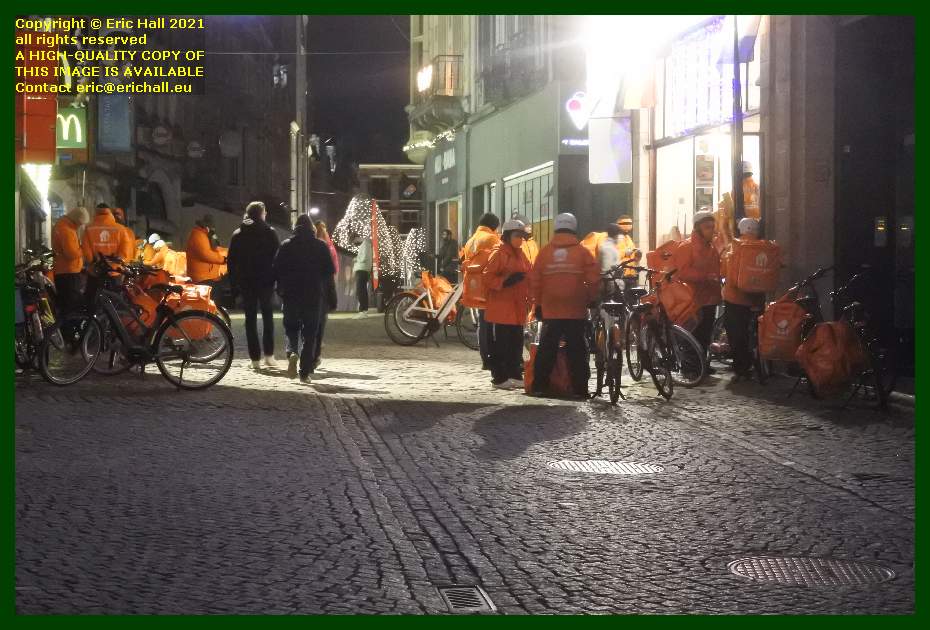 The far end of the Oude Markt is a small street called the Kortestraat, or “short street” that leads into the Grote Markt.

This is the street where almost every commercial ground-floor premises is a fast-food takeaway and I’ve had a couple of good meals in one of the fritkots here. But these days they are all closed to customers except for takeway and delivery, and one of the very few benefits of the current situation is the explosion in the number of food delivery cyclists in the city.

There’s a couple of dozen loitering here waiting to be beckoned by one of the food outlets. 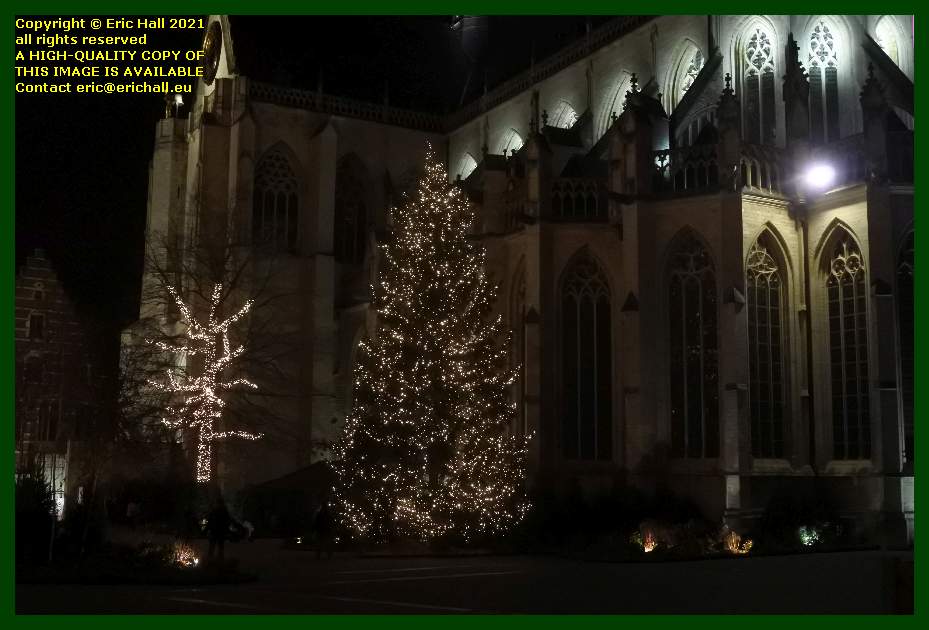 Yesterday I took a photo of the Town Hall – the Stadhuis – with all of its illuminations.

In previous years there have been all kinds of other decorations, such as creches and stables and the like in the Square but this year there is nothing at all like that. There’s a Christmas tree and natural tree that is illuminated and in between them is a small creche but that’s just about your lot.

Mind you, the buses are driving around the usual Christmas route deviation instead of driving through the Square 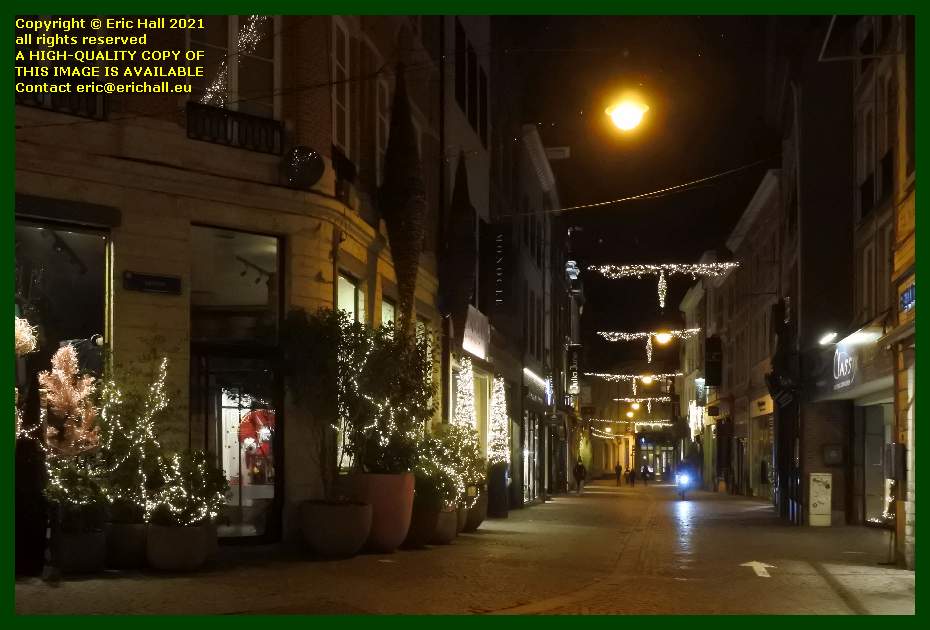 One thing that you have probably noticed is the absence of pedestrians in the city this evening.

From the Grote Markt I walked around the back of St Pieters Church and down the hill into the Mechelsestraat and here I struck it lucky. In this photograph you can actually see five other people, four on foot and one on a bicycle.

What I don’t see though are any really exotic Christmas decorations. A few lights strung up across the street and a few draped over a shop display by a private individual and that’s it. 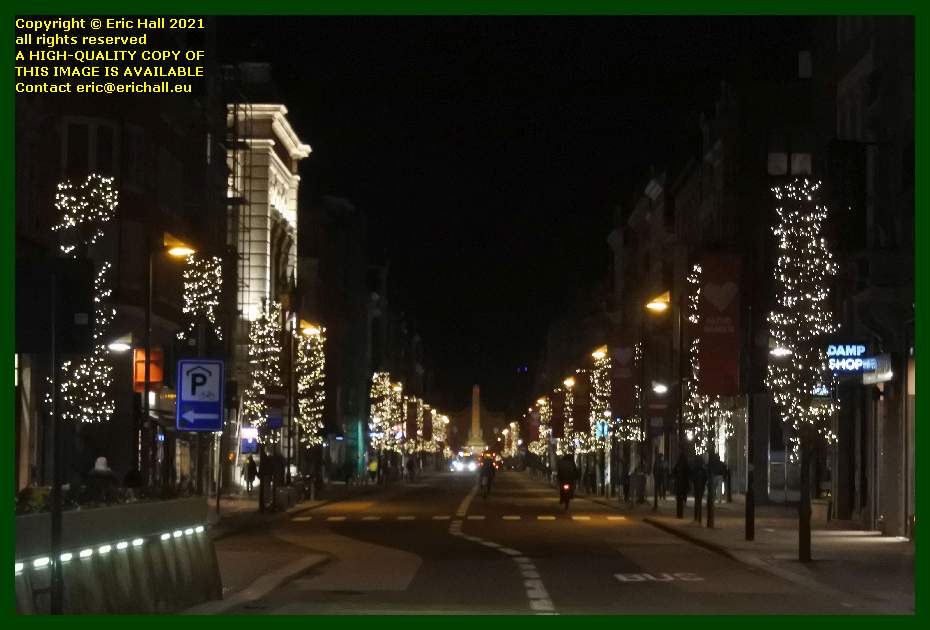 having inspected the Mechelsestraat I continued on my lap around the church without noticing anything special, and found myself at the bus stop in the Rector de Somerplein.

From there, there is a good view all the way down the Bondgenotenlaan to the Martyrs’ Column in the Martelarenplein and the Railway Station in the background. Every year the trees in the avenue are illuminated with lights draped in the branches and while this has never been anything startling, at least they have maintained the decorations this year. 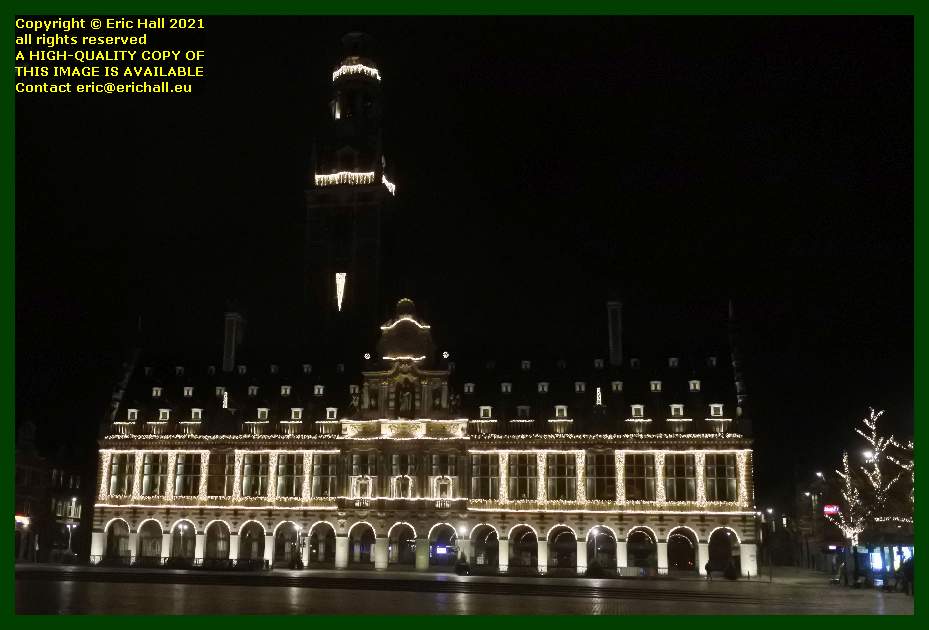 Back on the pavement I walked on along the street and then cut down a side street into the Monseigneur Ladeuzeplein.

Once again, the lights here in the Square are pretty disappointing. In front of us is the famous University Library, burnt to the ground along with all of its priceless possessions and collection of ancient books by the Germans in 1914 during the Sack of Leuven. And the lights here on this building aren’t anything like they have been.

Even so it looks extremely impressive, illuminated just like this. 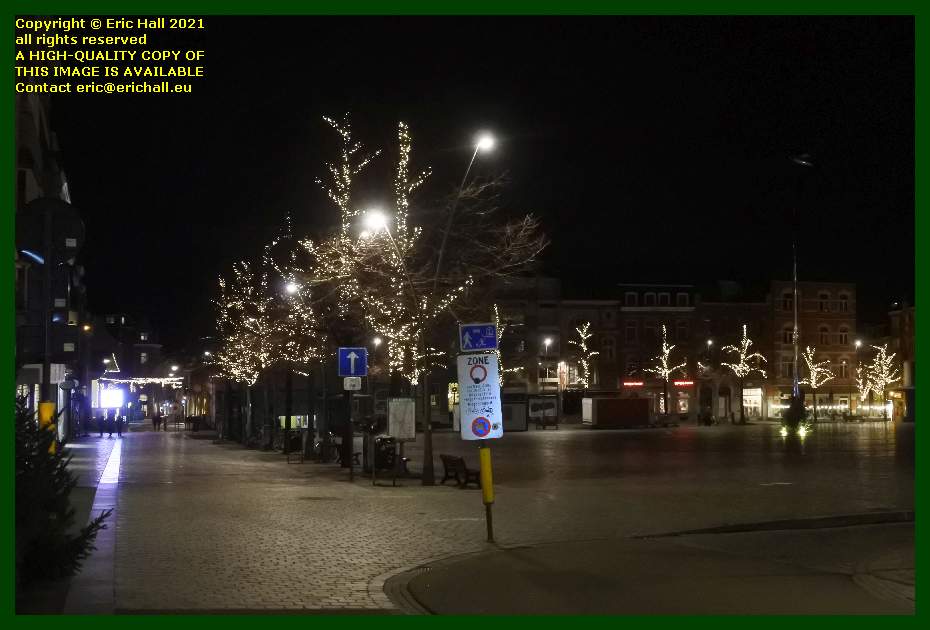 On the way back home I walked across the Monseigneur Ladeuzeplein towards the Tiensestraat.

Looking behind me, I noticed that the trees had received some kind of decoration to relieve the monotony, but again, I’ve seen much better than this in the past.

When I arrived back home I went to sit down for a couple of minutes but ended up crashing out for an hour. For some reason, this walking thing is taking a lot out of me.

Not feeling hungry I just made a sandwich for tea. There’s no need to eat if I’m not feeling particularly like it.

Now I’ve written my notes I’m off to bed. There’s an alarm tomorrow so I want to be on form. I have a date in the afternoon.