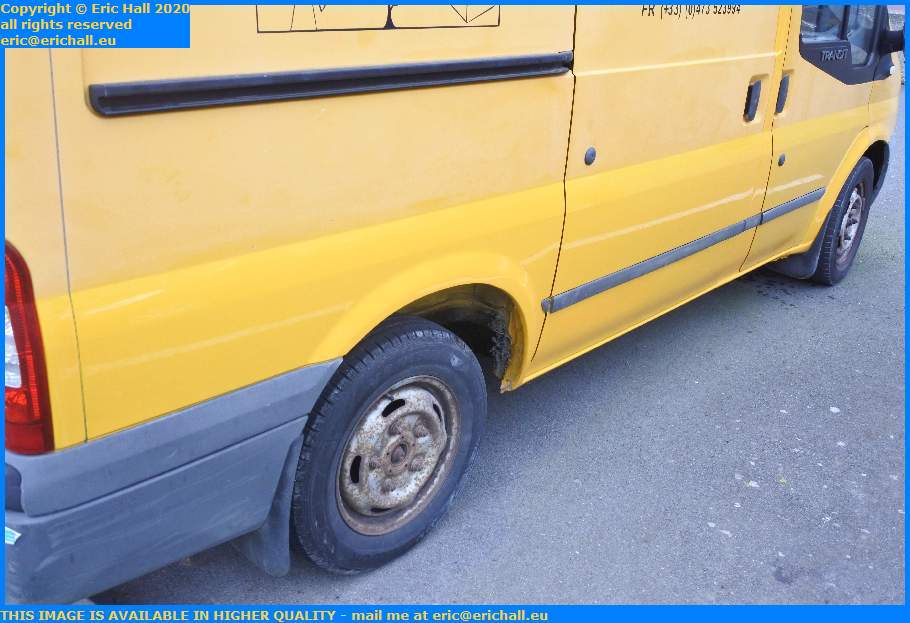 … look smart with his new bodywork all finished off?

Mind you, he ought to at the price that it cost me for the work. Before he gave me the bill, the garage proprietor asked me if he should fetch the defibrillator, and when I saw the cost, I wished that he had.

But there’s a 5-year guarantee on the body repairs and that will see Caliburn and I go out together. No-one has ever lived longer than 11 years with this illness and although it was only 5 years ago that I was diagnosed with it, I reckon that I had it for a good while before then. I remember CLIMBING UP TO THE CHATEAU DE MONTSEGUR in early 2014 and being totally wiped out in a situation that I would have run up without any problem a couple of years previously. 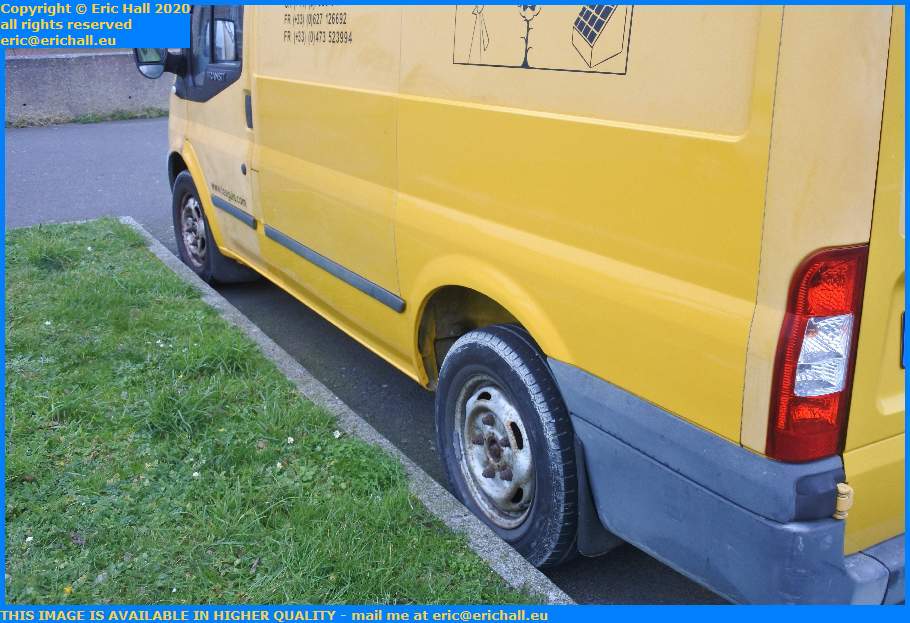 There’s no reason to dispose of Caliburn and have something else for whatever time remains. A new vehicle wouldn’t be worth it at all and if I were to buy something second-hand, who knows what I’d end up with?

But I’m not impressed with the broken mirror though. That’s “disappointing” to say the least.

Something else that’s disappointing is that I missed the third alarm. What makes me feel even worse about that is that after the second one had gone off I remember saying to myself that I’ll beat the third one easily seeing as I’m so wide awake.

Oh Folly! Folly! As the late-lamented Stanley Unwin would have said.

First thing to do was to listen to the dictaphone.

There was a whole group of us looking at a map of the Far North of Russia. One of my friends was there and we were pointing out where we’d been on our famous trip to the North, although she was getting it wrong so I was having to show her on the map a lot better than she was guessing where we’d been. Another friend was there as well having a good look. We were talking about our journey, all this kind of thing very much in the same sense as we did about a dream quite a while ago when we were out in the High Arctic. I went to get my things. I had a tray with coffee and a jug of tomato juice, a few other bits and pieces. As I picked up the tray off the table the jug brushed the kitchen cupboard overhanging it and knocked it over. The tomato juice went everywhere. I just put the tray down in despair because I knew that this had really happened to me before and it’s going to happen to me again. It’s always the case when I’m in a rush – I have to do 3 jobs instead of 1. There was much to it than this but I can’t remember now – something to do with the taxis as well. I was having to go out on the taxis later but it was getting late and no-one had rung me. We were bound to be busy because it was a Saturday night and I’d have to go out. But I thought “who was going to take over on the radio?” This kind of thing. Then I thought that Nerina isn’t here either. She’s still away somewhere but she’ll be coming back and be stuck in the office. Maybe she could do the radio but I don’t know anything more about that.

Some other time during the night I had a computer and I was trying to do something. We were looking at this home video of someone’s bedroom and marvelling at the old selection of electronic and electrical appliances that there were back in the 70s and 80s that we don’t see now. Later on I had my computer coupled up to a reel-to-reel tape recorder. I was recording tracks that I was picking up on the internet radio onto that with the idea of editing them afterwards with Audacity or something. The idea was that once everything was stored onto master tapes it can be copied onto CD and filed away. I was having to work out how this was going to work

After the medication I carried on with a task that I started yesterday and hadn’t mentioned. There were almost 250 unread e-mails in my mailbox, some of which were going back to the early summer, as well as a whole pile of ones that I’d already read and which were now serving no useful purpose except to waste space.

Consequently I’ve been going through them yesterday and today, dealing with a pile of stuff that I should have dealt with a long time ago and there is still some to do. And a few more people will have a surprise over the next few days when they start to receive replies to messages that I sent out months ago.

Something else that required attention was to ring up a certain telephone number in the UK. Between 1972 and 1974 I worked for an Insurance Company in the UK and I was wondering whether I might be entitled to a pension payment in this respect. It took me ages to track down who I should speak to because the company has changed hands a few times since then but I eventually managed to speak to someone who reckoned that he could help me.

In the end it turned out that because I

There was nothing for me at all. But still, it was worth the phone call simply to find out.

It’s hardly a surprise that after all of this I crashed out on the chair for half an hour. And a really deep one too, just like the ones that I was having a week or two ago. Just recently, if I have crashed out at all, it’s just been drifting off for 5 or 10 minutes or so. 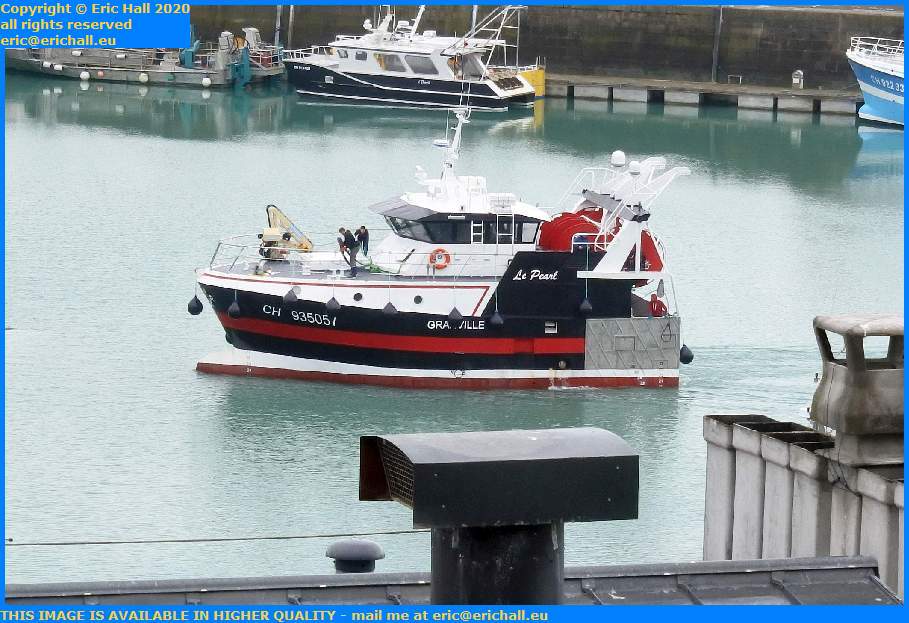 After lunch I headed off to pick up Caliburn – yes, I’d telephoned the garage too to see if he was ready.

Down in the harbour there was a trawler that I don’t recall seeing (although I must have done, I suppose) before. She’s registered in Cherbourg and she’s called “Le Pearl”, and proudly displays on her superstructure the fact that she comes from Granville

She’s quite a pretty craft, and by the looks of things she’s fairly new too so maybe she really is new and has replaced an older one that has been put out to grass somewhere. She’s only been mentioned in shipping records since 20th October this year.

We’ll have to see if there’s anything in the papers about it. 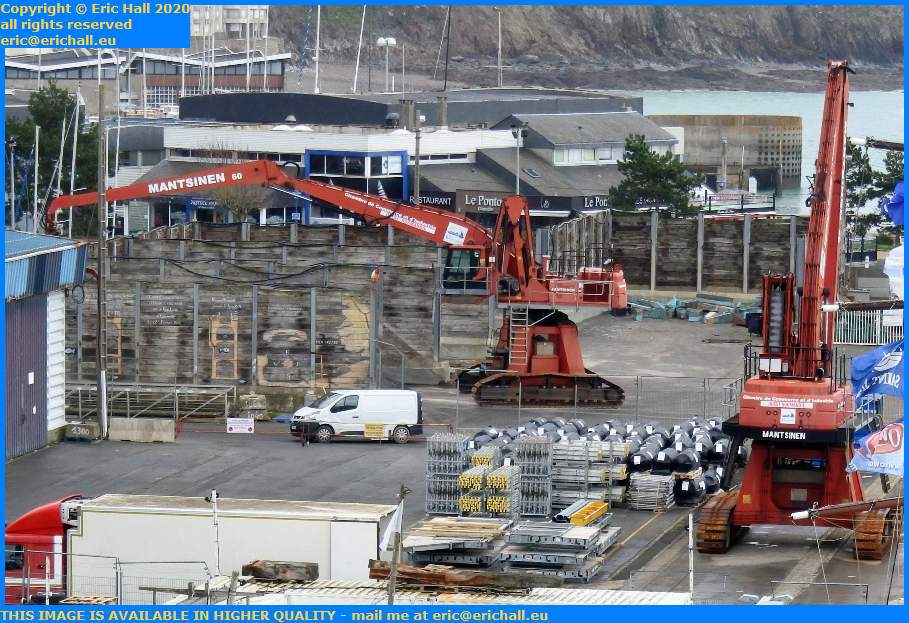 Further along in the harbour, there are signs of activity at the loading bay underneath the crane.

A whole pile of builders’ material is now there ready for loading. It looks as if one of the Jersey freighters is going to be coming back into port very shortly to take it all away.

The next question is not “which one will it be?” but “will I get to see it?”. Regular readers of this rubbish will recall having seen just recently a really rapid turnround of the ships and we’ve probably missed more than we have seen since they have begun to extricate their digits 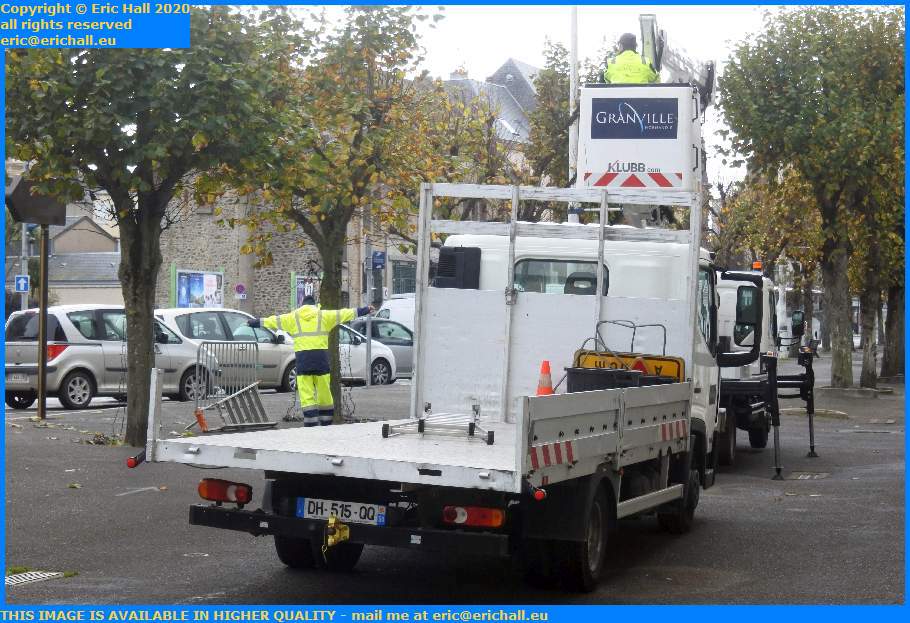 I pushed on … “pushed off” – ed … into town on my way to the garage, but I only got as far as the Cours Jonville before I stopped again.

Regular readers of this rubbish will also recall that we’ve seen the Christmas decorations pushing up like mushrooms all over the town. Here I was lucky enough to stumble upon a couple of Council workmen with a cherry-picker who were busily stringing up a collection of fairy lights around a few of the trees down here.

Leaving them to it, I pushed on along the Boulevard Louis Dior (and forgot to take the photo of the alley yet again) and up the steps at the end, past the railway station and out of town. 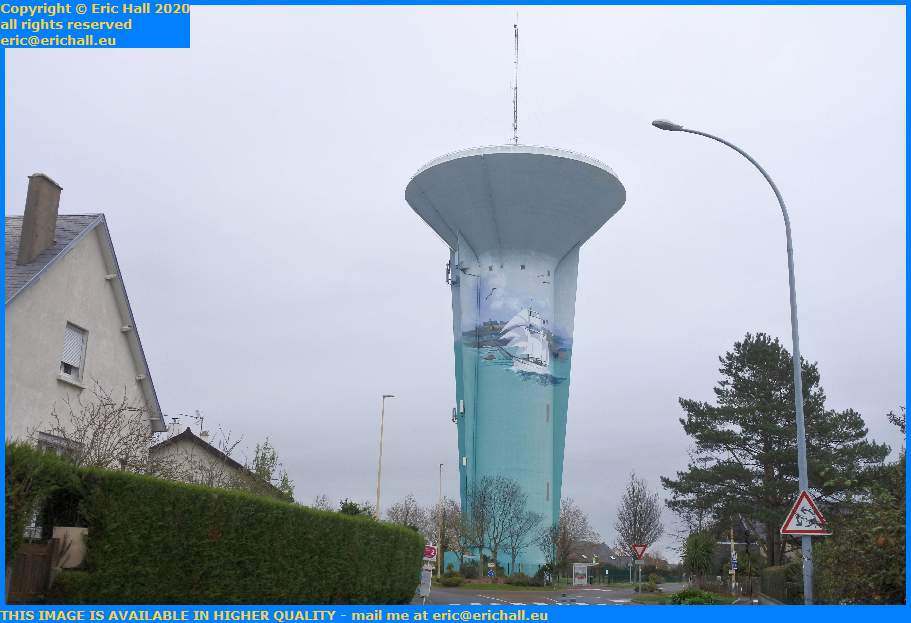 It’s a long, weary trudge all the way out of town but I was determined to do it on foot as a form of good exercise, and I’m glad that it wasn’t very warm.

Past the centre of St Nicolas and into the countryside and here at the roundabout on the edge of town is the water tower that we have seen in the background of so many photos. I quite like this water tower. usually they are simply slabs of dull-grey concrete but with this one they have made an effort to try to make it blend into the environment.

By now, I’m well in the countryside and still a kilometre or two to go. 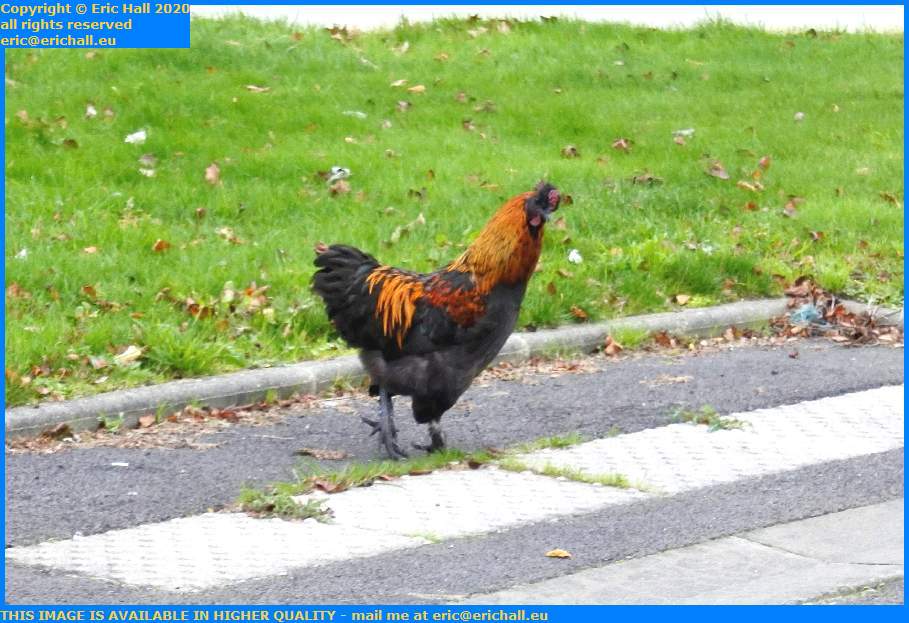 However I wasn’t alone on my travels.

There is a housing estate on the very edge of the town beyond the roundabout and here standing on the corner watching the world go by is a chicken. What he’s doing here I really don’t know but seeing as he near to a pedestrian crossing he might be trying to cross the road.

And as for why he would want to do that, it’s anyone’s guess.

At the garage they clearly have more faith in me than I have because they had left Caliburn parked in the street Had I had a spare pair of keys I could simply have driven away.

And I made rather a fool of myself in here by complaining that they had set the Controle Technique to expire in July, before I realised that I had been looking at the insurance sticker.

Having paid the bill and recovered from the shock, I went down to Leclerc for the weekend shopping, where I spent a fortune.

One thing that I like about the end of the grape season is that it’s the start of the clementine season and I can polish those off just as quickly as I can polish off grapes.

With not having bought any heavy stuff for ages the bill was somewhat elevated but a lot of that can be blamed on the soya milk that was in three-packs on special offer. My mid-morning hot chocolate gets me through a lot of that.

And interestingly, when I arrived at rhe checkout I found that I had a pile of ham in my trolley. Somewhere along the line I had picked up the wrong trolley and had to retrace my steps until I found mine

Ohhh! The exciting times that we lead these days!

Back here I made a start on the arrears, still getting nowhere rather fast. This isn’t doing me any good at all.

The hour on the guitars was successful again – I enjoyed it just as much as yesterday – and for tea I had a burger that needed eating with some pasta followed by apple crumble.

Just as I was about to go out on my run, Rosemary phoned for a chat. And 2 hours and 48 minutes later we stopped. We had a lot to say.

23:15 is far too late to go out for a run so I was glad that I’d had the marathon walk this afternoon.

Tomorrow I’m going to try my hand at baking seeing as I’ve finished off the banana bread. See what damage I can do to a chocolate cake. But that’s for later. I’m off to bed.