… whether this has been a good day or a bad day.

When the third alarm went off this morning I was still in bed but surprisingly, I actually sprung up out of bed and sat on the edge. I’ve no idea what happened there – the “springing up” bit, I mean.

And neither will you when I tell you that I was still up and about at 01:40 this morning too. Having a lie-in is one thing but not when it adjusts my body clock quite like this.

As usual these days, it took an age for the bed to stop spinning so that I could get off, and once I’d gathered my wits I had a listen to the dictaphone.

We started off with a voyage that went on for ages and ages. I thought at first that it was a dream about football but it’s not. It took me a while to think about what it was actually about because when I tried to dictate it, it had all gone completely out of my head for a while but suddenly it all came back to me, as the skunk said when the wind changed.

It was actually about skiing. We were all going skiing, a huge group of us with a couple of friends of mine from the Wirral. I had some people whom they knew from the past but couldn’t remember very well some of the people. We’d all met up and having a ski around in the mountains. I was explaining to them my favourite ski runs particularly in the summer when there was still snow up in the mountains and skiing was still possible. We were making plans to all go and they were asking me “did my friends like this? Did my friends like to stop for regular breaks?” All this kind of thing. I hadn’t really got round to telling them that there was only me who was interested in going with them to do this. This conversation about my favourite ski runs in this mountain went on – you get to the top and you get the drag lift up here and you take this nice beautiful red run all the way down here. This went on for ages. Then it was time for break and we were sitting around. I was waiting at a table with this particular group. People were asking “do we want to continue? Do we want to go on?” I said “my group hasn’t asked for any food yet” so I said to them “do you have any requests? And make sure that they are physically possible”. Everyone burst out laughing but no-one actually asked for anything.

A little later it was a beautiful afternoon and I was walking around the little park/lawn place by the Boulevard Vaufleury and is this the first time that I’ve dreamt about Granville? Even though it was beautiful there was no-one really taking advantage of it except a group of schoolkids doing physical exercises under the supervision of a teacher who might have been called Taylor. There were people discussing a murder and whether a certain guy had done it and someone else chimed in “well they’ve got the wrong Taylor there haven’t they?” to which everyone wondered what he was meaning. I’m not quite sure where it went after that.

Not only that, I attacked a few of the arrears and I’m slowly whittling them down. As well as that, while I was listening to this week’s radio programme before I sent it off (I did remember), I spent an hour or so on the arrears of photos for July.

Having sent off the broadcast, I extracted the digital record turntable. Not being able to find the software for it, I had to hunt it down on the internet. But once it was all installed and connected up, it seemed to work quite well and I was able to record an album – the one that I wanted to record.

The only downside is that it recorded in mono. That’s not as big a deal because I can convert it into stereo. It was true mono too – not just one track of a stereo recording, so the fault either lies with the album (it might be a mono recording) or with the settings that I’m using. I shall have to check.

But once I’d done it, I was able to use part of it to complete some old stuff that I have from another time in order to recreate a rock concert that I had seen in 1971. That took the rest of the day but now it’s a nice live concert of almost an hour, including the legendary track about which I shall one of these days recount a very long story. 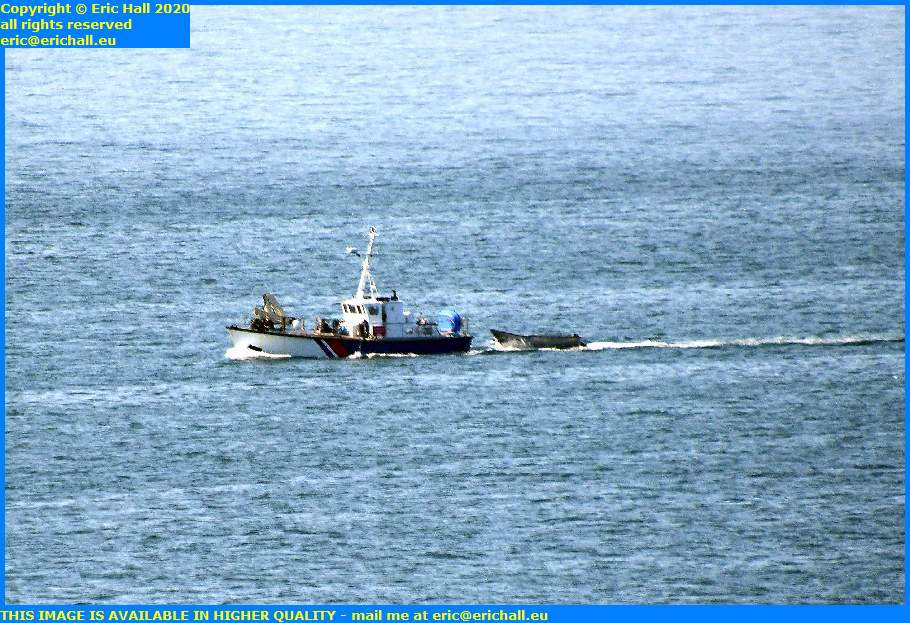 As usual, I went out for my afternoon walk. And in the heat too. My thermometer at home was showing 29°C and it felt like it too.

It’s been a couple of times that I’ve seen it now and I’ve still not been able to work out what it is and who owns it. 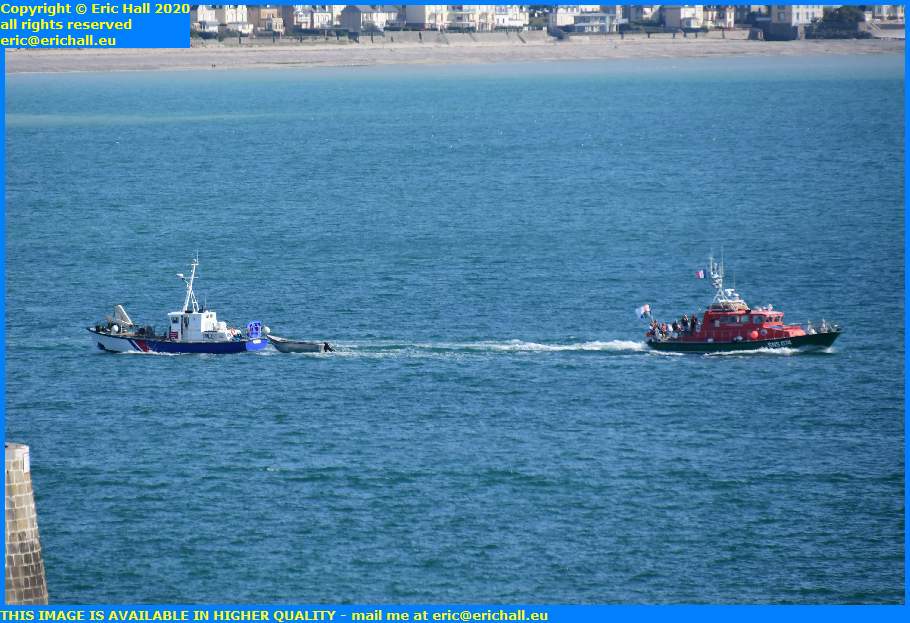 But anyway I carried on around the headland to the other side and there I was treated to an interesting nautical danse macabre.

The lifeboat was coming out of its berth in the port de plaisance and it crossed the mystery boat right outside the harbour. We had a couple of toots on a siren and then a complicated manoeuvre as they avoided each other.

The mystery boat, which has an interesting heavy-duty crane in the bows, then carried on into the Port de Plaisance. And I carried on home.

There was the session of Welsh and the time on the guitars and then I stopped for tea. Stuffed pepper followed by my delicious apple crumble with the left-over ice-cream out of one of the containers in the freezer. I need to make some more room in there. 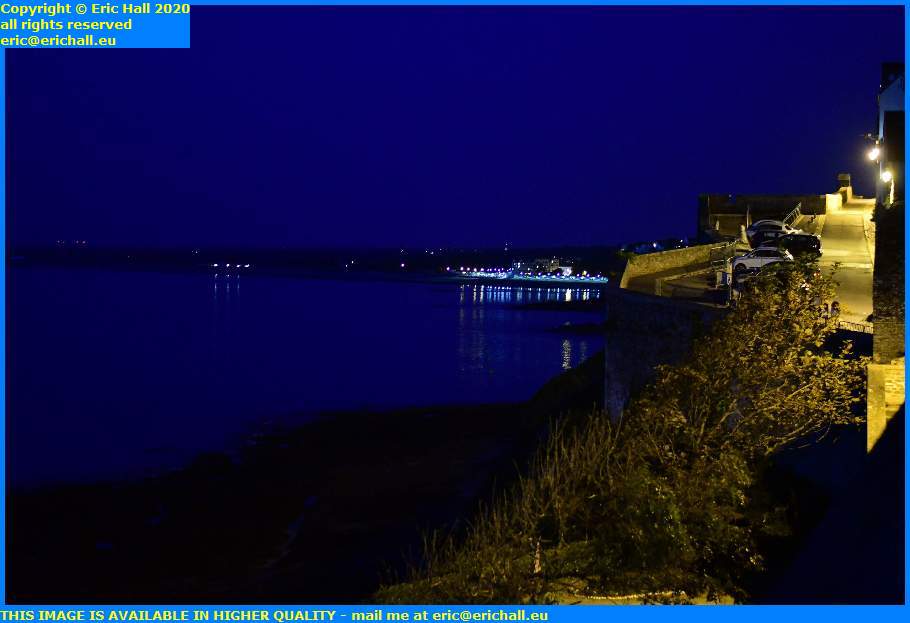 It was still stifling hot when I went out for my evening walk and runs.

There were quite a few people about this evening here and there which is hardly surprising given the heat. There was a heat haze out to sea so the view wasn’t as clear as it has been just recently.

However the view of the promenade at Donville-les-Bains along the coast was particularly impressive tonight and the photograph that I took came out rather well.

The Rue du Nord on the right of the photo has come out rather well and on the left you can see the red lights on the wind turbines round somewhere near Cerences. 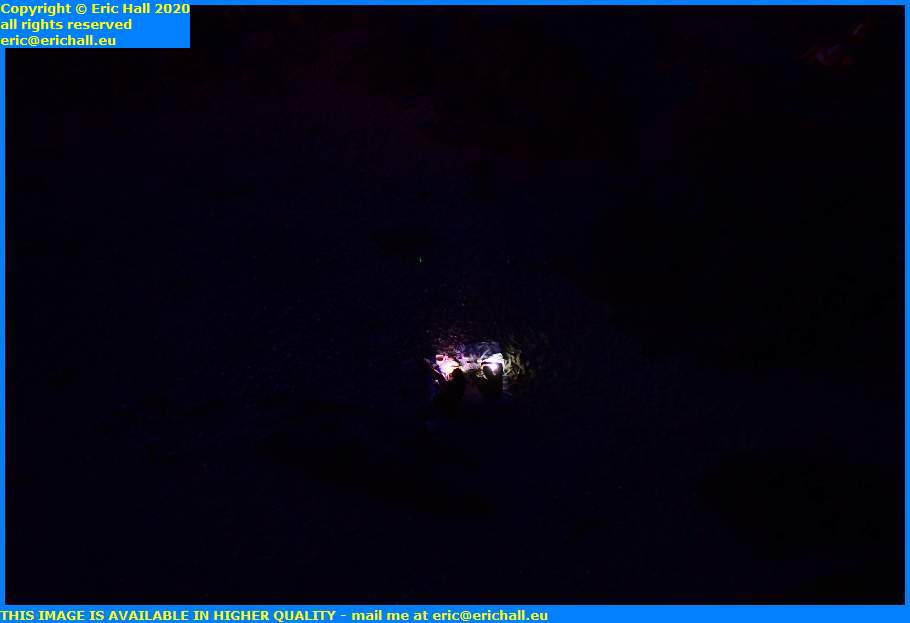 But my reverie was disturbed by a noise coming from down below on the beach so I had a look over the wall.

Pitch-black is one thing for most of us but for young people it’s something else. These two down here checking messages on their mobile phones seemed to be having a very enjoyable time. And why not?

As for me I walked up to the old gate in the walls and then ran down the path towards the viewpoint over the Plat Gousset. 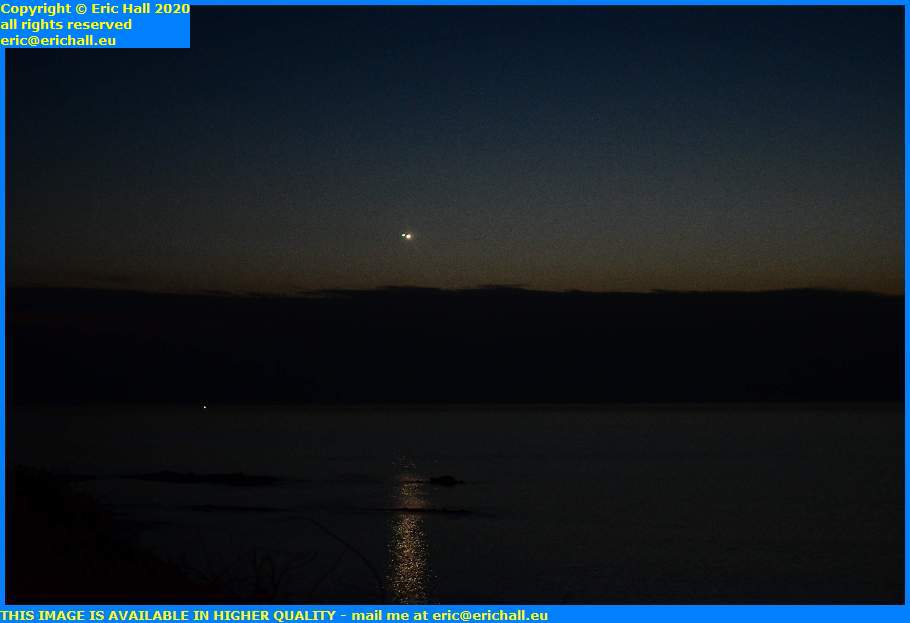 But I didn’t get very far and actually had to break off my run which disappointed me, because the excitement yet isn’t over.

As I was running down the path I was overtaken by a helicopter that flew along the coast and then went to ground down near the promenade at Donville-les-Bains.

“This is a strange time of the night to be having your chopper out” I mused to myself, and then carried on with my run. On reflection, the helicopter is quite probably the local air-sea rescue machine.

Nothing much else happened so I headed home. I managed my three runs although I do have to say that I never ever felt less like it. Having crashed out for 15 minutes after tea has taken its toll.

Tomorrow it’s Welsh class so I need to do some more revision, and then there’s the concert to finish off, followed by the missing week of my internet course.

Then at last I can turn my attention to other stuff. And not before time either.