… Sunday today I had a lie-in as usual. 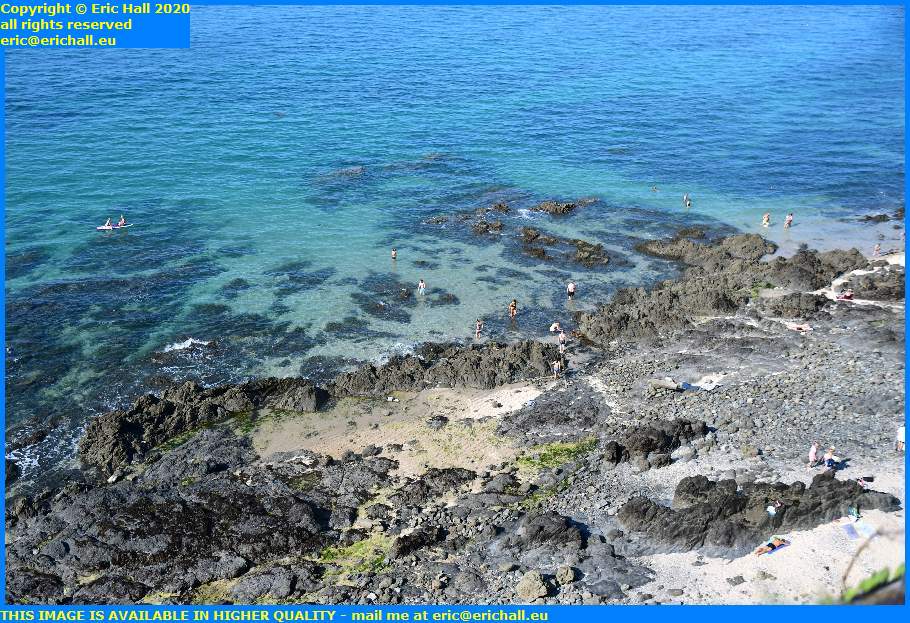 And while you admire some photos of beach scenes from this afternoon’s beautiful weather, let me just mention that while a lie-in is one thing, 11:40 is something of an exaggeration.

Even when going to bed is as late as 02:30 and still not being able to go asleep straight away (despite the comfortable clean sheet), I was still hoping to be up and about long before then.

Consequently the most important part of the day was wasted away as I lay sleeping in my bed. 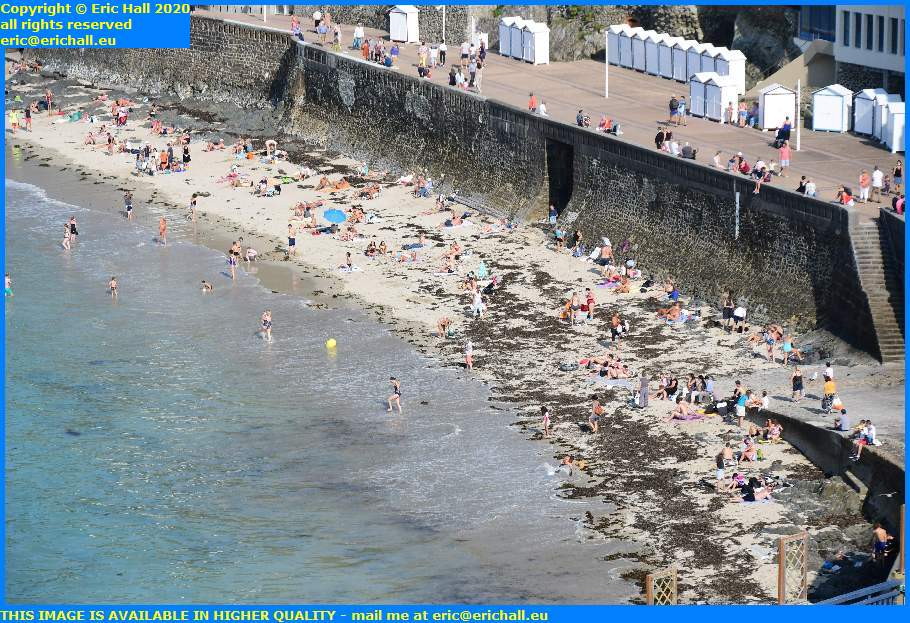 Once I’d gathered my wits (which took longer than you might expect given the small amount of wits that I have still remaining) I attended to the dictaphone.

Last night we were round in Berlin in May 1945 just at the moment when the city was about to fall. We were there urging everyone to get away as far as they could. A lot of people refused. They were thinking that it wasn’t going to be any problem at all. Someone was even saying that it would be things like probably they’d just issue little notes like “get your hair cut” or something like that. I exploded with disbelief because I knew exactly how the Russians were going to behave once they had taken control of the city. No civilian should be expected to suffer anything like that at all. I was just so unbelievably annoyed by the attitudes of the average Berliners who refused to do anything to save themselves.

It sounds rather like the UK and Brexit, doesn’t it?

There are still plenty of arrears to be dealt with, and I had time to deal with three of them. The backlog is disappearing slowly. This time next year I might be somewhere near catching up.

Apart from that I had a very quiet day and didn’t do too much else. 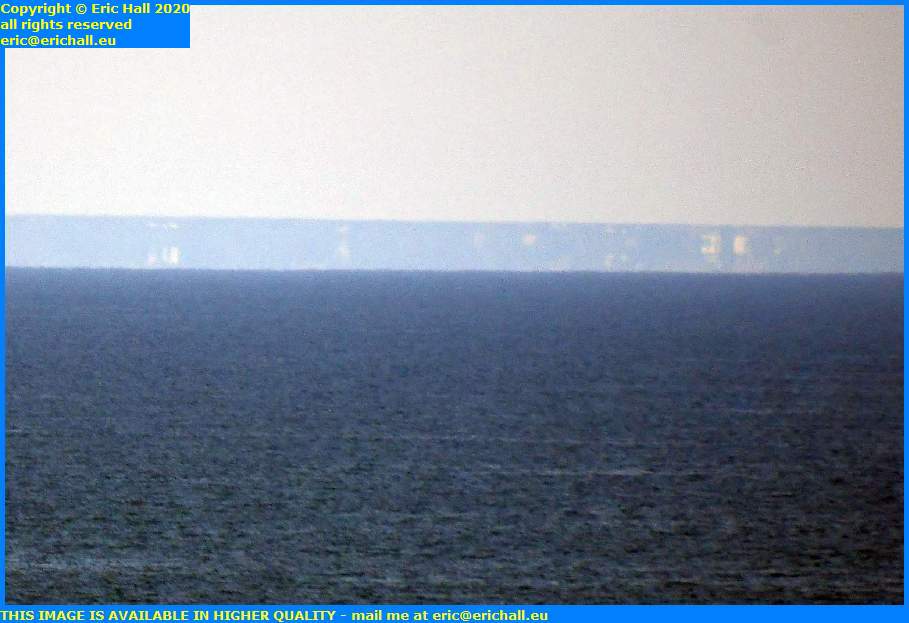 There was the usual afternoon walk of course. And today I went around the medieval city walls instead of around the headland.

The weather was gorgeous and the view was magnificent. All down the coast you could see for miles, just like the other days. The Channel islands, and Jersey were as clear as a bell despite being 58 kilometres away and the town of St Helier was easily visible with the naked eye.

On the photograph even the tall buildings on the quayside came out quite clearly. 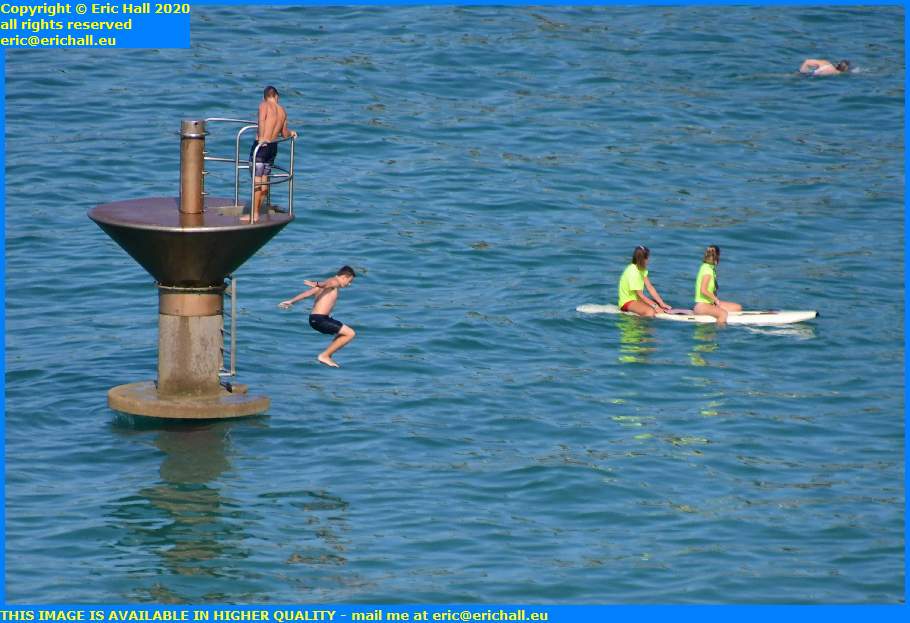 There were crowds of people out there today enjoying the beautiful weather and who can blame them?

We’ve already seen all of the people on the beach at the Plat Gousset and also just outside here at the foot of the steps. There were plenty of people in the water there, as we have already seen, and there were also quite a few clambering up onto the diving platform and leaping off.

That’s something that we’ve seen quite often, but what is new about all of this is that the lifeguards are there too – two of them sitting on a paddleboard in the immediate vicinity keeping a close eye on the proceedings. 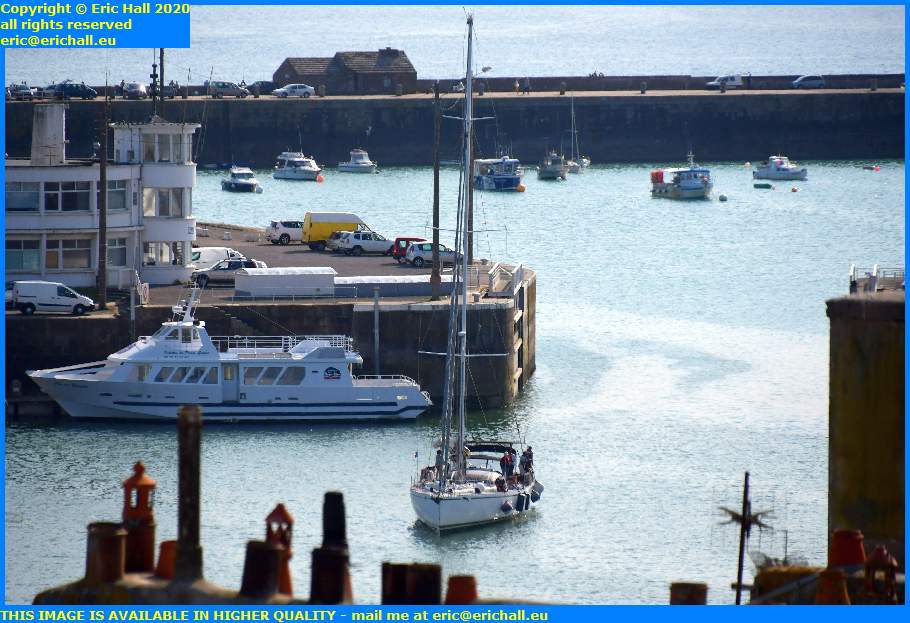 Having observed from the viewpoint over the Place Marechal Foch the crowds in the water and on the beach down on the Plat Gousset, I headed off.

Of course with the crowds, I didn’t run across the Square Maurice Marland but walked across instead. And as I was doing so, I saw a rather large yacht come sailing into the inner harbour.

My first thought was that it was Spirit of Conrad coming into the harbour. It certainly looked quite like it and so I wondered where she had been. 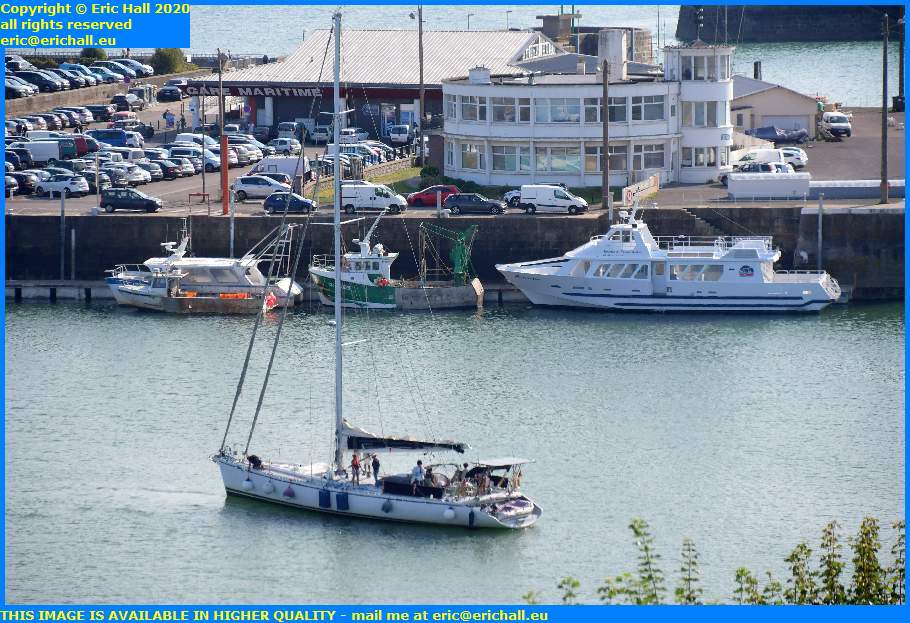 But on closer examination it turned out not to be at all.

Leaving aside the fact that Spirit of Conrad was already moored in the harbour, this boat has a very large solar panel on the stern.

And that makes me think that I’ve seen this yacht before because I recognise the solar panel. But I can’t think of when and where and I certainly can’t remember the name.

Incidentally, Joly France I is there moored up against the harbour wall. It can’t be all that busy out on the Ile de Chausey today which is quite surprising. 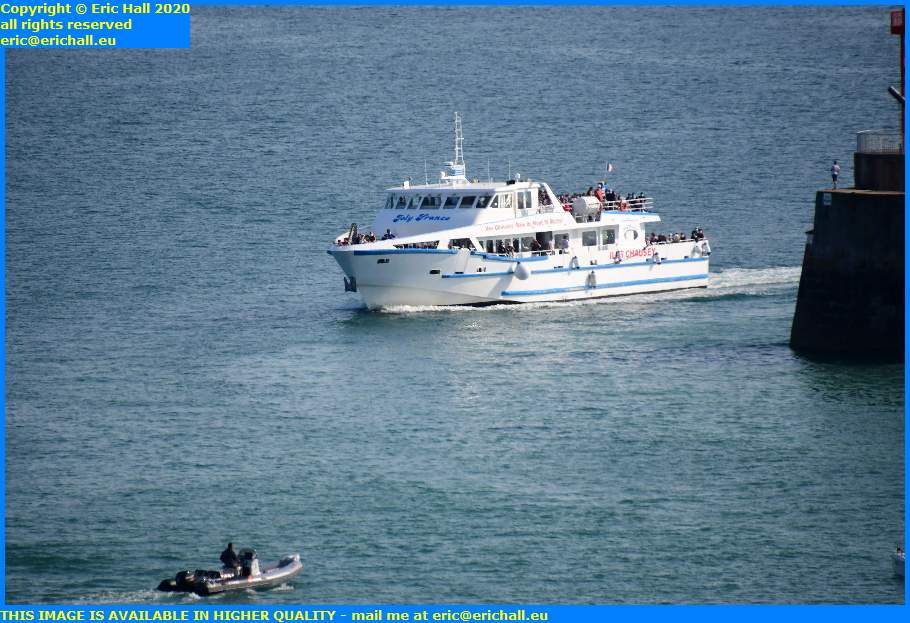 Having said that, however, there was still plenty of business today going across to the island.

As I watched the boats in the harbour, around the headland came Joly France, the older one with the larger upper deck superstructure and smaller windows. And, of course, without the figure “1” next to the name on the front underneath the windows.

You can see the crowds on there too. It looks to have been really busy today and I bet that there isn’t very much in the way of social distancing going on aboard. 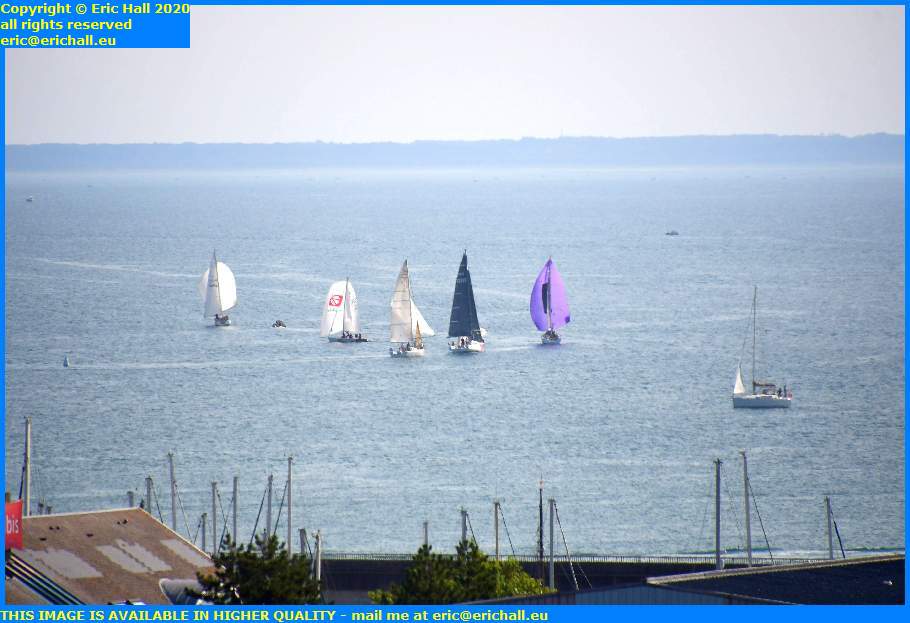 The Baie de Mont St Michel is crowded again today, just like yesterday. All kinds of beautiful boats out there but what particularly caught my eye was this lovely collection of yachts, sails billowing in the breeze and other extremely poetic metaphors.

None of them that I particularly recognise of course. Loads of people come here with their boats in trailers from all parts of north-west France. 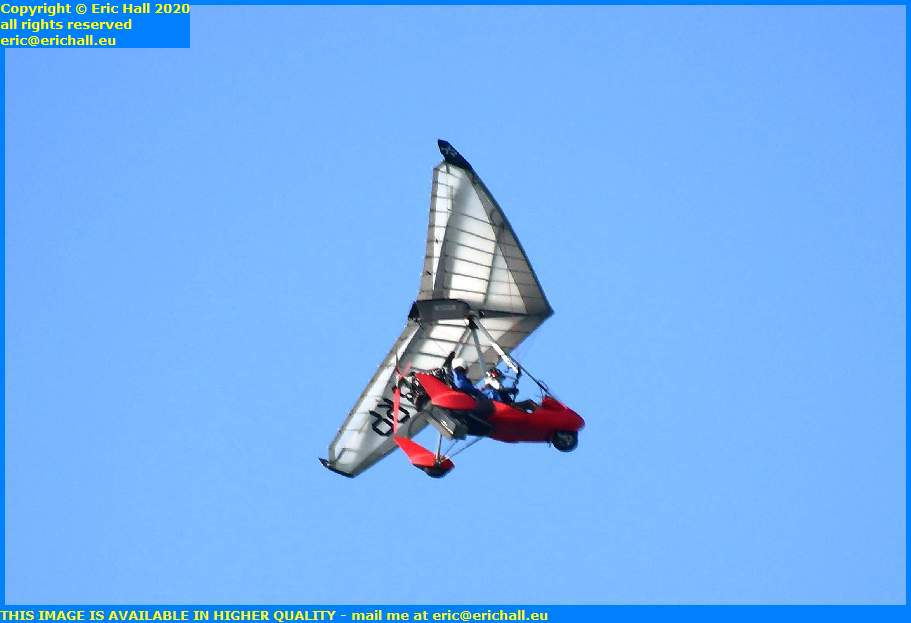 Plenty of movement up in the air today too, including the microlight powered hang glider that we’ve seen on a couple of occasions just recently.

Back at the apartment I sorted out a pizza base. I’d taken a ball of dough out of the freezer earlier so as soon as I came back I flattened and rolled it and put it on the baking tray to sort itself out.

As it overhung the edges I adopted the simple expedient of folding the overhang back into the pizza tray.

While that was settling down I made an apple crumble. being rather extravagant with the mixture I ended up with far too much so I had to make two. With not enough apples I had to use some of my eaters.

As to what they came out like, I really don’t know.

Once the crumbles were in the oven I assembled the pizza and then cooked it in the oven. It came out really well and the edges were perfect. I’ll have to fold them over next time too.

However, so filling was it that I didn’t have room for any crumble. That’s going to be as of tomorrow. 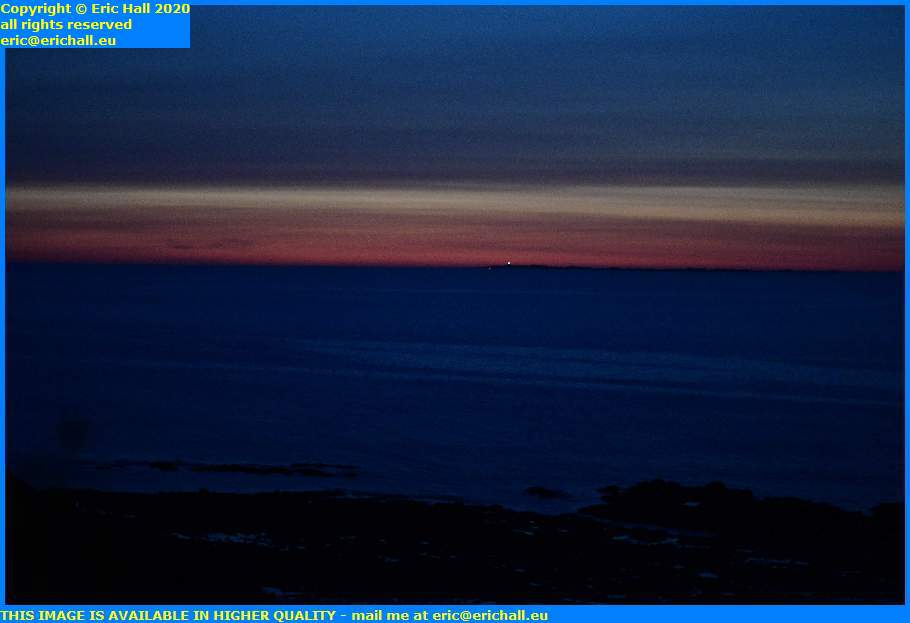 There was nothing much going on outside tonight for my evening walk.

The sunset (even though the sun had long since sunk below the horizon) was really nice this evening and it was so clear that all of the lights were clearly visible.

Nothing else of note so I completed my lap around, including my three runs, and then came home.

Back to work tomorrow and there’s plenty to do. There’s just getting to be more and more building up and I really need to get myself moving.

One thing that I’m going to have to deal with is the situation about my LPs. I’m hoping too have a go at recording them and there’s one that I particularly want to do for my radio programme.

Always assuming that I remember to send it off this week.