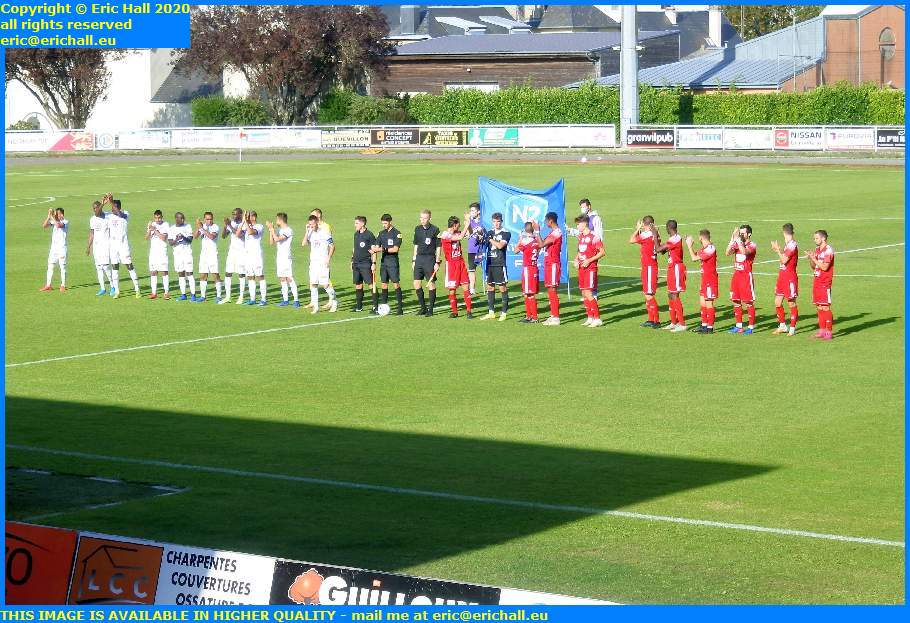 … I have seen probably one of the most exciting games that I’ve ever seen at the Stade Louis Dior.

For a start, just for a change, I’ve seen Granville’s defence play a whole 90 minutes without a single lapse of concentration and only one major error (when a defender with the ball slipped and lost possession).

As well as that, I’ve seen the midfield firing on all cylinders – even the guy who I’ve criticised on several occasions in the past. He had an excellent game.

The big and awkward right winger, Livio Nabab, who has played international football for Guadeloupe – he played in midweek at Vannes and scored a couple of goals and today it was perfectly clear to everyone that he had much more to offer than the average run-of-the-mill National 2 player. he showed his skill and intelligence on a couple of occasions and created plenty of chances for the attackers.

The only problem was that the forwards once more failed to make any impression up front and when Nabab went off injured after 65 minutes, Granville’s attacking threat simply petered out despite the evident superiority of the team in both play and possession.

For all of that, it certainly was a most exciting match even if neither goalkeeper had very much to do during the match.

However, this is going to be a long, hard season if the forwards can’t find their way to goal. How I would have loved to have seen an attacking pair of Nabab and William Sea from last season up front for Granville

Apart from that, today has not been a very good day. Not the least reason being that I couldn’t go to sleep last night. It was gone 01:00 and I was still wide awake.

Mind you, in news that will surprise everyone reading this, including me, I was actually up and sitting on the edge of the bed when the third alarm went off. However, to say that I was awake would be rather stretching the point. It took me a good 10 minutes to gather my wits.

Nothing on the dictaphone so I spent a while transcribing a few entries from a couple of weeks ago.

After a shower, I went out to the shops. There was nothing at all in NOZ except a couple of batteries for the guitar pre-amp and some dishwashing sponges.

LeClerc didn’t come up with anything special either, except a box of 2kgs of grapes for €3:50. They won’t last long. They did have some frozen sprouts though this week.

Back here I put away the frozen food and then sat down on the chair, where I crashed out properly and completely. I was gone for a couple of hours – something like 13:30 when I awoke and as usual, I felt quite dreadful. It took me a good half hour or so to collect my wits.

After a late lunch I had some paperwork to do, and then I had another go at the Welsh revision. That took me up to 17:00 when I went off for the football. 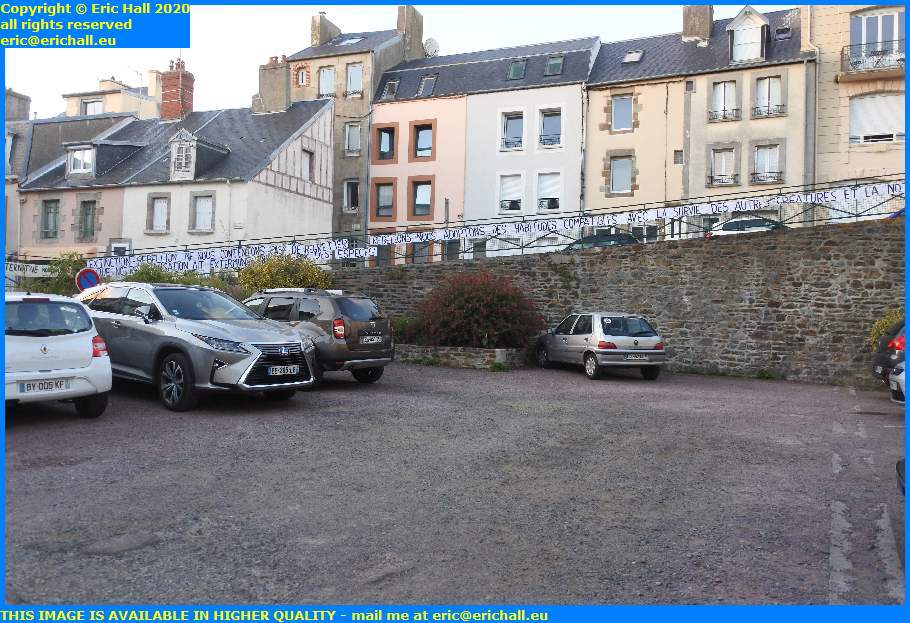 On the way back from the football I came home a different way. Since I started running a year or so ago my daily target has increased so I need walk farther to make my target.

So my route home took me down through the alleyways and onto the car park at the Rue de la Fontaine Bedeau. I’m not sure what they have been doing here today but it looks as if there has been some kind of demonstration.

All of the notices and slogans seem to be attached to the railings on the car park. Whether it’s just to inform visiting motorists I really don’t know. I shall have to make further enquiries. 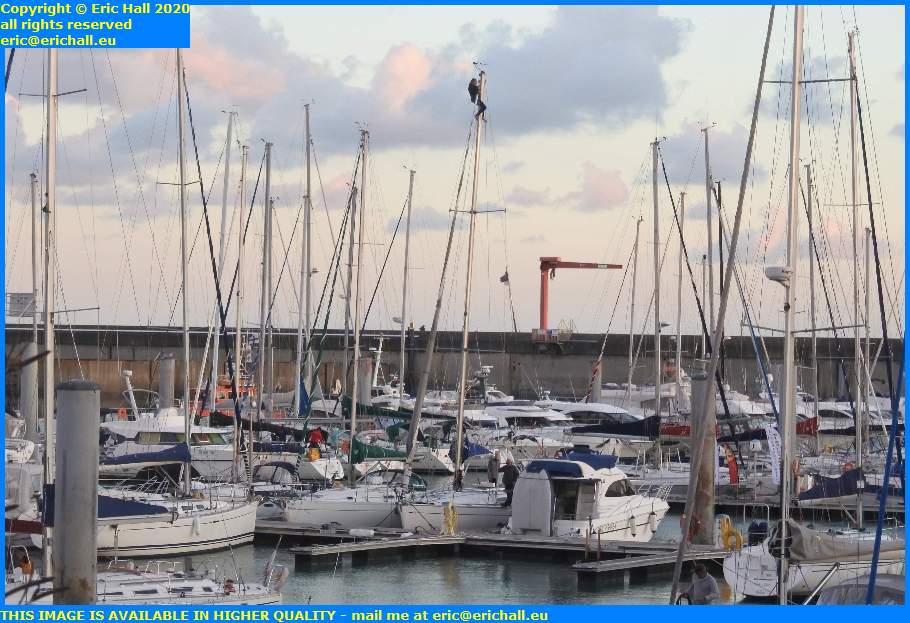 As I walked past the end of the port I noticed something strange in the distance so I went to make further enquiries about this.

When I approached the scene I saw that what was happening was that there was someone who was climbing up the mast of one of the larger yachts here in port.

As I watched, his mates unfurled a large sail that presumably was attached to the mast in which our hero was lodged. This led to an extreme amount of animated discussion between him and the remainder of the crew. 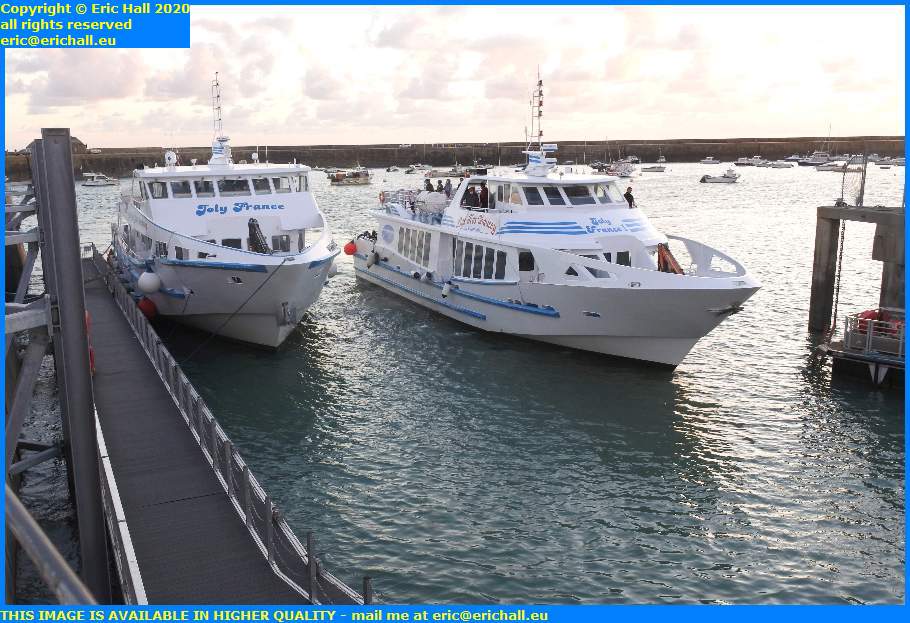 While I was there, I went to sit down to catch my breath. And as I did so, Joly France came into port with the evening ferry from the Ile de Chausey.

The older one of the two was already here, moored up. The newer one, Joly France is is the one just coming into port.

If you can’t read the names, you can tell the difference. Joly France I has a smaller superstructure on the upper deck, has larger windows and has a step cut in the stern. 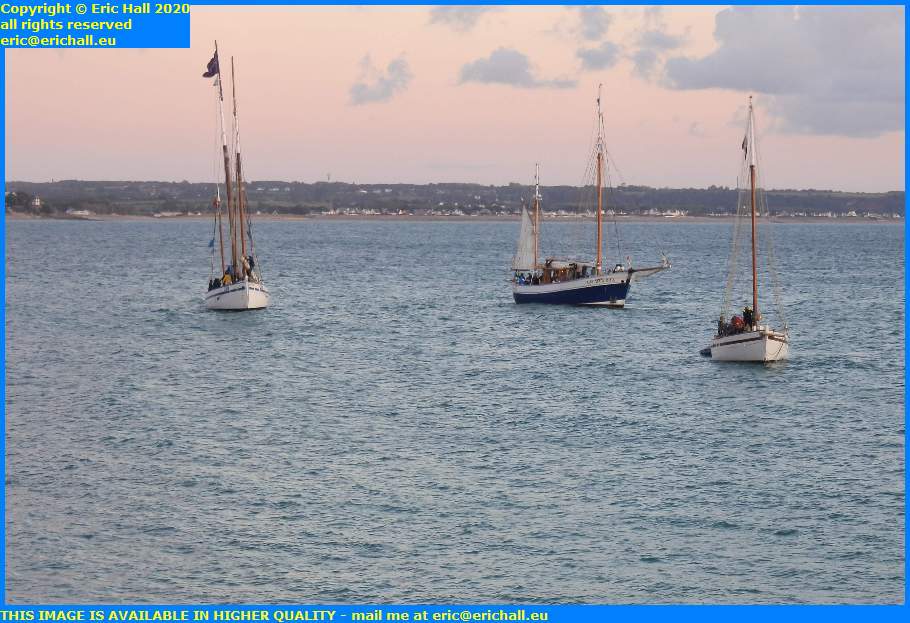 That wasn’t all of the excitement either.

There was a queue of boats waiting to come into the harbour behind Joly France I. I don’t know the identity of the smaller yacht but the blue and white one is Charles-Marie and the larger white one with G90 written upon it is La Granvillaise.

By the looks of things, they have been out either for the day or maybe even for a few days with a pile of paying customers. Not that there are very many places to go right now with the Channel Islands and the UK out of bounds. 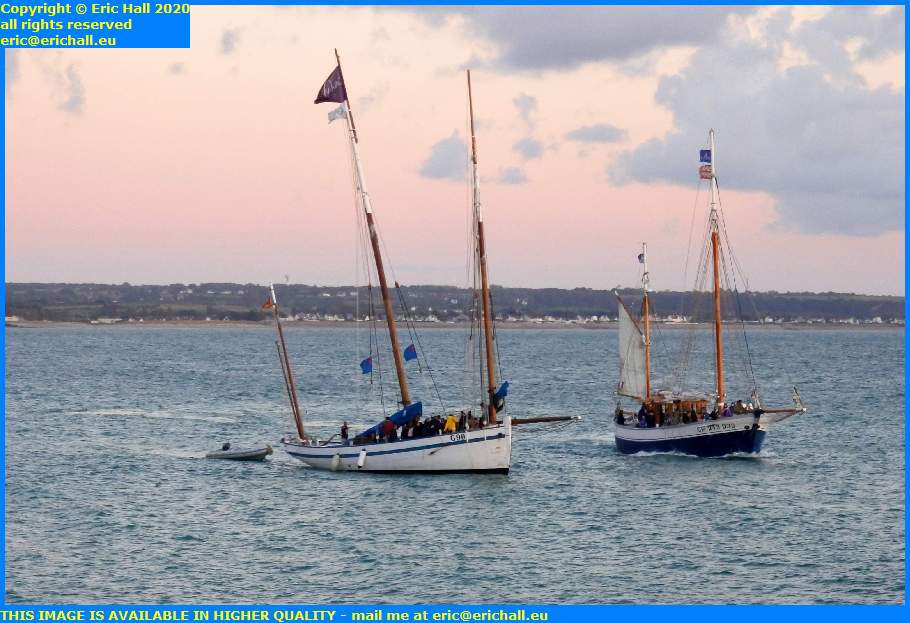 As I watched them, they suddenly lurched into the harbour. That told me that I’d missed the gates. They had now opened so I couldn’t go across them and had to retrace my steps.

On my way back I bumpred into Pierre so we had quite a chat about this and that and afterwards I made my way home.

Back here, I had tea out of a tin followed by a banana and ice cream which was delicious. I’ve written up my notes, albeit slowly, and now I’m going to go to bed.

Tomorrow is Sunday and a day of rest, and you have no idea just how much I am looking forward to it. i’m moving about somewhat better than I did a week or so ago but I’m still not feeling 100%. It’s a slow recovery, if “recovery” indeed it is. I have to make the most of my rest whenever I can.