… rather better day today than yesterday. For a start, I beat the third alarm again. Not by very much, and I was sitting quite groggily on the edge of the bed when it went off, but I beat it nevertheless.

After the usual morning ablutions I had a go at the dictaphone to see where I’d been during the night.

We were staying in the city, something like that, last night. It was winter and I was on this hospital car park for some reason. Someone pointed out to me a dog that had two pairs of shoes on and a man running behind with some kind of paper wrapped round his feet. Apparently he’d been getting the dog out of his car in the snow and the dog had taken his shoes and gone off, leaving him behind. It was some kind of hospital and I had to walk across this car park to do something. Then I realised that I had my own appointment so I carried on. I was carrying a ladder and something else that I’d borrowed from the hospital. I got into the sheltered walkway and came to the door where there was a row of steps going up. When I got there, there was someone I recognised. It might have been someone whom I know from Newfoundland who was the caretaker. I had to give my things back to him. There was another guy on the door. It occurred to me walking across the car park that I didn’t have any form of identity with me, any kind of money. I didn’t have my hospital paper so I don’t know how I was going to talk my way into having my appointment. It was too late to run back to the car now. Anyway when I got there I thought that my Newfoundlander friend would vouch for me and who I am. There was a receptionist guy on the counter and I was about to go up and tell my story to him when I awoke again with yet another bad attack of cramp. I don’t know how many attacks of cramp I’d had during the night but that part of it was quite awful..
At somewhere else during the night I’d been with a guy who I know from a Greenock Morton Football Club internet site. We’d been to watch the game. Morton had started the season very unprepared with quite a few players short. They had been talking about players who the club was signing so I went to the ground. We were all standing around the field watching. the first action was a clearance from one of the defenders that hit a Morton player and the refereee blew for handball. Under the new procedures it wouldn’t have been given so we all had a moan at the referee. The we suddenly realised that we were all encroaching on the pitch so we had to walk back a couple of yards and found a chain link around the ground so we walked further back and put the chain link back up. There was some kind of fence that stopped us seeing much of the game so the two of us walked round behind Morton’s goal to watch the action from down there. There was talk of someone signing from a non-league club. he was supposed to be very thin and very tall. There was a discussion about players initials, some kind of gambling thing where you gambled on who the club would sign based on initials. We were talking about the game and the score was 2-0. I couldn’t find out who is was who had the 2. It looked like Morton as they were doing all of the attacking but I couldn’t be sure.

While I was at it, I transcribed a few more from the backlog from when I was on my travels. It was really hard to do anything while I was away because the computer was just not quick enough to respond and I wasn’t well enough

One day i’m going to have a major rearrangement of the things on the shelves and make some more space. There’s no need for half of the plastic containers that I have, for a start.

With some time that was left I attacked the photos from my voyage. I didn’t edit anything like as many as I wanted because I ended up with two photos having to track down where I was when I took them.

In the end, one I managed to trace but the second (and one or two that come later) will require much more of a detective effort to work out where I was when I took them.

Another reason why I took so long was that I … errr … closed my eyes for a moment or two.

After lunch, I did some of my Welsh revision and then attacked the new internet course. It took most of the afternoon but I managed to do a whole week’s course today.

It’s true to say that I knew a great deal about the basics of the course and that helped a lot, but I still learnt quite a lot from it. 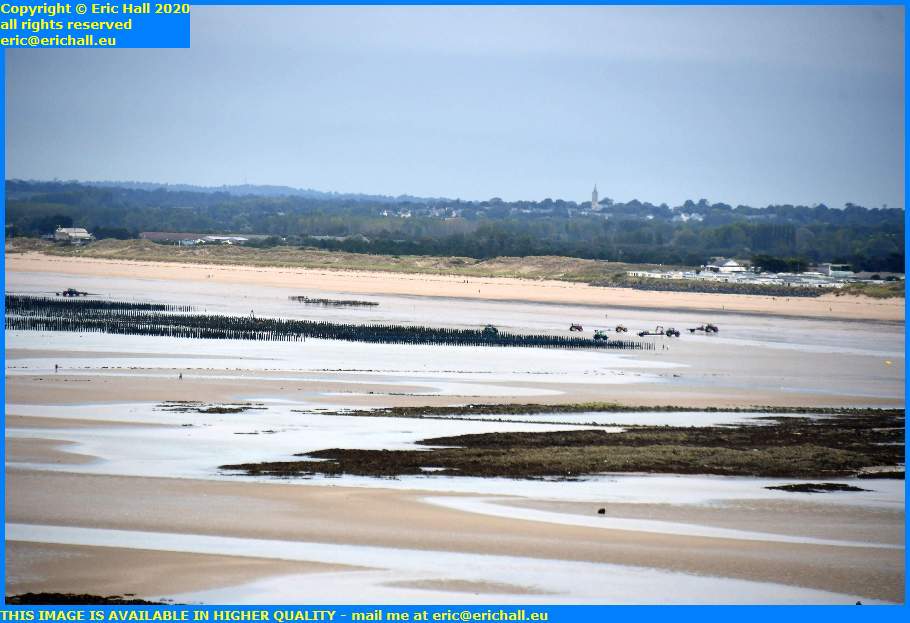 There was the usual break in the working afternoon while I went out for my afternoon walk.

Not that I went very far before I was distracted. The tide was quite far out this afternoon and out across the bay at Donville-les-Bains the mussels posts were uncovered.

What I think they are are the posts and strings for the bouchots – the mussels that grow on strings. The tractors and trailers are out there harvesting them.

The advantage that bouchots have over ordinary mussels is that with not being on the ground, they aren’t full of grainy sand so they taste much more natural and don’t break your teeth. 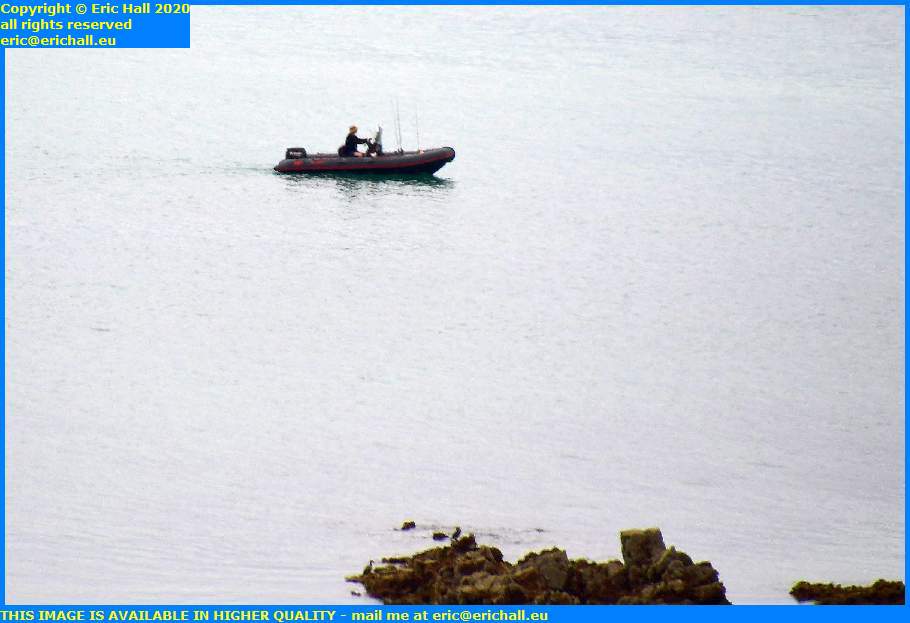 It’s not just down on the seafood beds that the ocean is rendering up its harvest – at least, in principle.

Regular readers of this rubbish will recall that over the last few das we have seen several fishermen out there casting their lot into the water. Today, we have a couple of guys on a zodiac coming round the headland.

They have their rods at the ready and it looks as if they will be taking up their positions just off the Pointe du Roc. I wonder if they will have any more luck than anyone else whom I’ve seen. 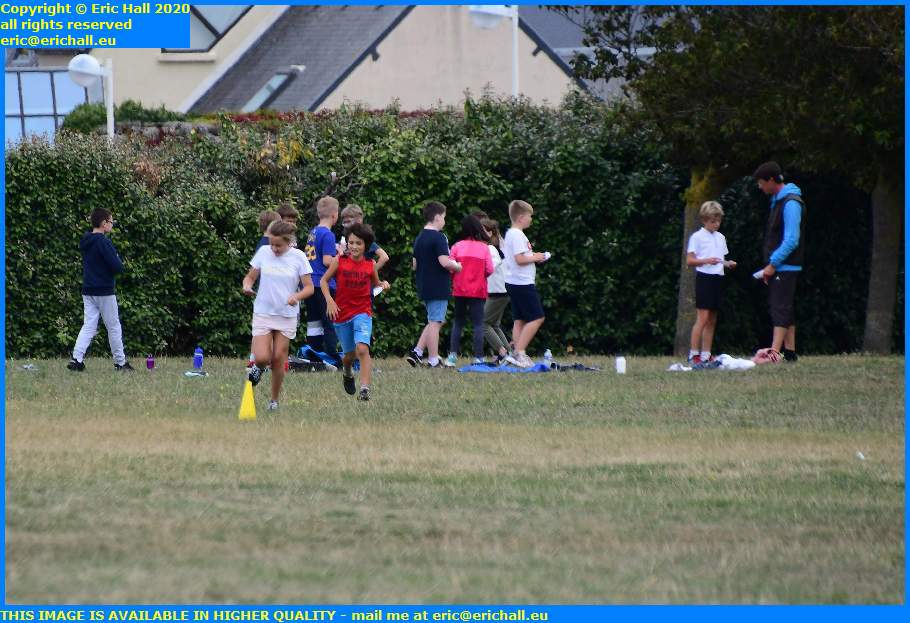 There was something extremely curious going on this afternoon on the lawn by the old bunkers at the Pointe du Roc.

The kids, presumably from a local school, where playing a game there. But what caught my eye more than anything else was the absence of masks and the absence of any social distancing.

It’s apparently true to say that kids aren’t as susceptible to the virus than adults (so they say) and don’t suffer as much, but then they all go home and see their siblings, parents, grandparents and neighbours over the weekend.

It seems to me to be pretty short-sighted to exempt kids from the requirements that everyone else is obliged to take. But then, looking at the horrendous casualty figures and the lack of decisive action to prevent or enforce the regulations, it looks as if Western Governments have given up the fight and prepare to sacrifice the population to the God Mammon. 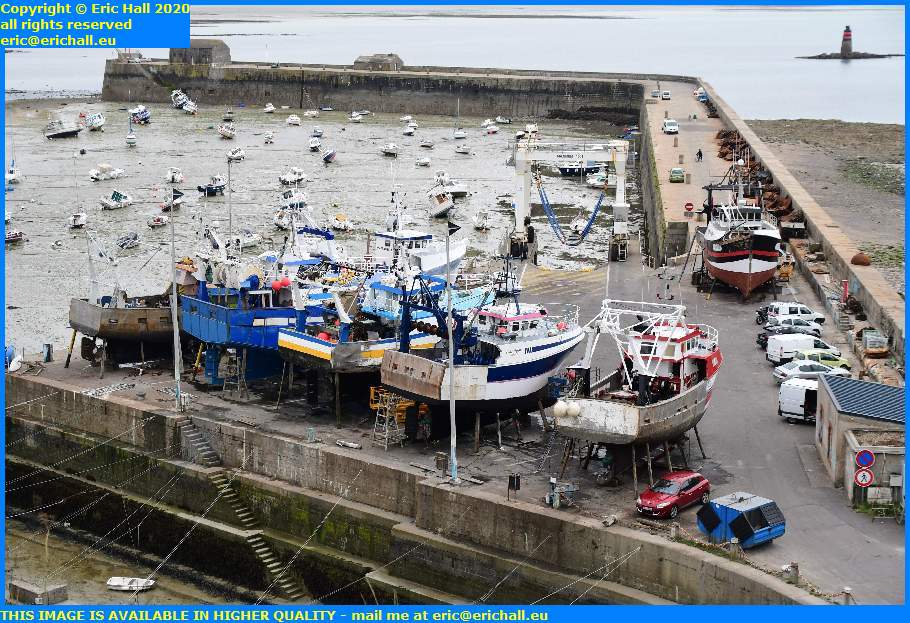 My walk continued round the headland to the viewpoint there and I could see the latest developments in there. It’s been pretty full with seven boats in there but just the other day we went down to six. However today, we’ve gone back up to seven as another boat has come to join the collection.

Plenty of people down there working on them too. It’s all go in there right now, so it seems. I’m particularly interested with the one on its own on the left in the front of the row of five. They have been spending the last week or so stripping all the paint off it. 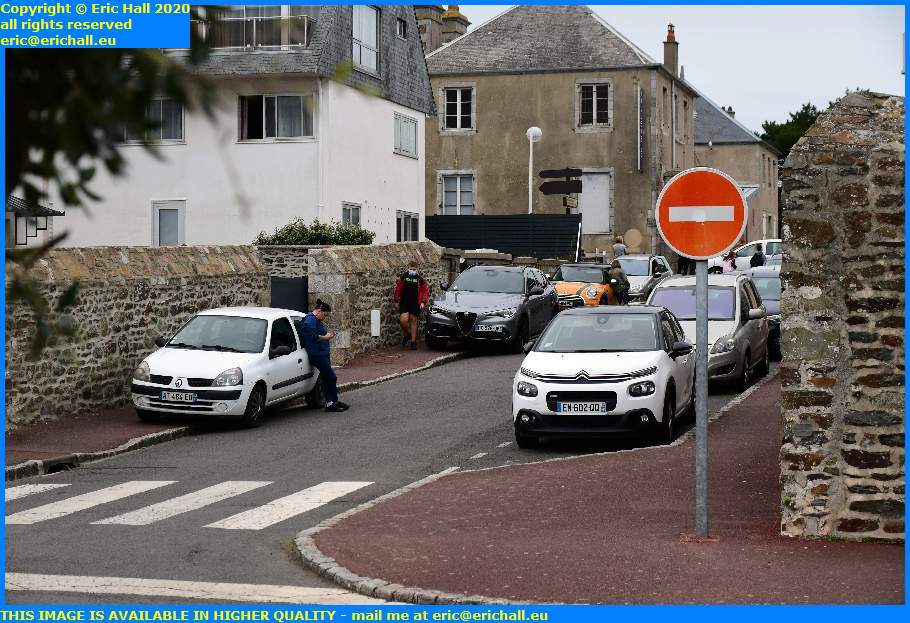 From there I walked along the path and down past the the end of the Rue Saint Pierre, the little street that leads up to the College Malraux.

It’s close to school chucking-out time and you can tell that by the vehicles that are parked half-on, half-off the pavement blocking the path to anyone who would like to walk along the pavement on that side.

When you consider that there’s a huge free car park just 50 metres away from where they are parked, it’s really a shameful situation to see them parked like that.

Anyway, you’re all probably quite fed up of me talking about pathetic parking so I’ll move on back home where I finished the internet course for the week and had my hour on the guitars.

Tea tonight was vegetable balls with steamed vegetables and vegan cheese sauce followed by the last of the rice pudding.

Later on, I went out for my evening walk. There were only two other people out there which is no surprise because it was quite dark.

Nothing was going on round by the rue du Nord so I carried on to the footpath and then ran along there, pushing on 20-odd metres past my limit. 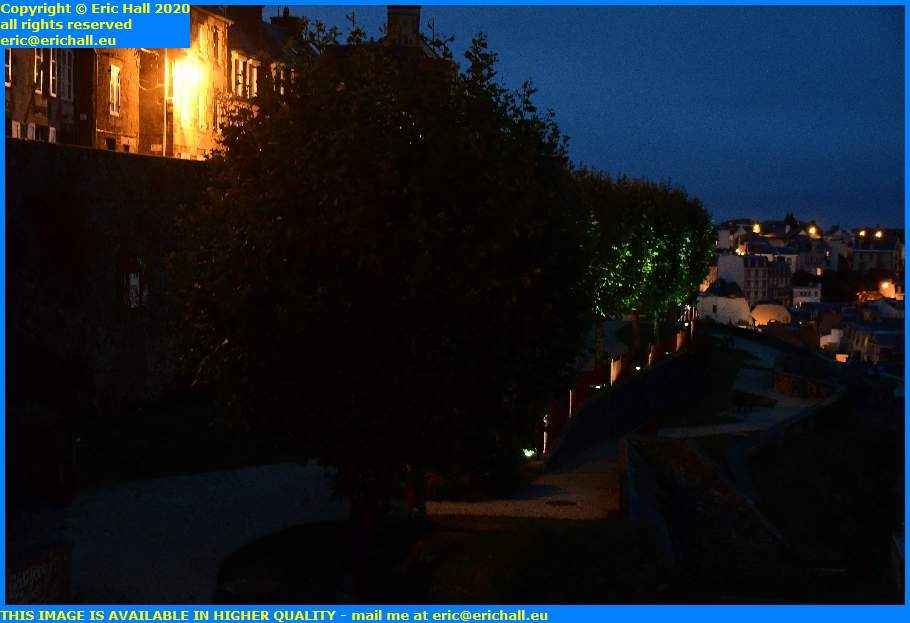 There was nothing happening at the viewpoint overlooking the Place Marechal Foch so I went over to the Square Maurice Marland and ran all the way along it and up the ramp at the end.

A couple of days ago we saw the lights in there come on and illuminate the trees. They were already on by the time that I reached there, and everything was so much brighter so the photo is better tonight.

With nothing else going on at all, I ran on back home to write up my notes and then have an early night.

Tomorrow it’s shopping day so I need to be on form. I don’t need very much, for once, but I’ll need to remember exactly what I do need.