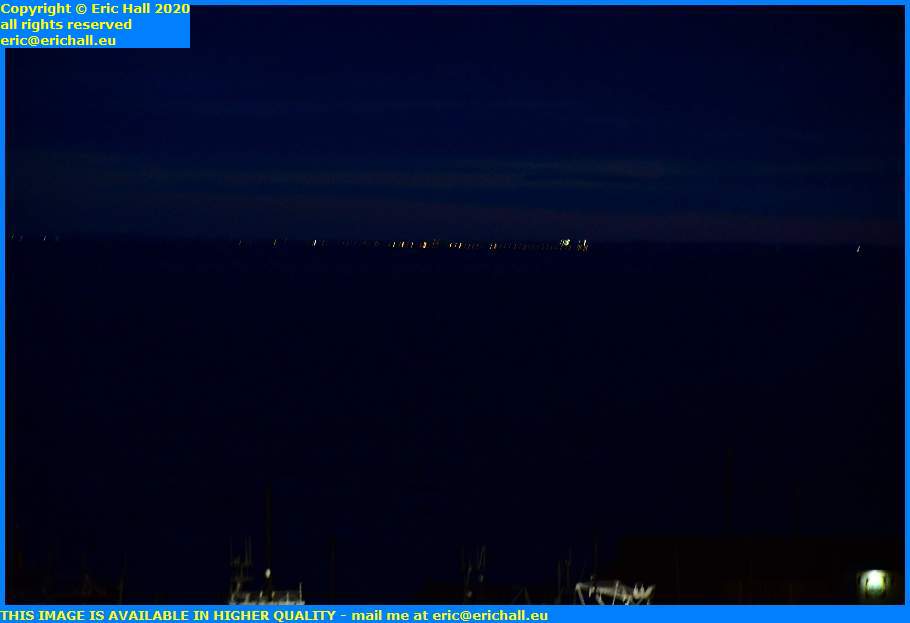 … that the nights are getting longer right now. Summer seems to have left us a long way right now and we are in a slow downward spiral towards winter.

Out on mt stroll tonight, around the city walls tonight, it was quite dark by the time I’d gone around and the street lights across the Baie de Mont St Michel on the Brittany coast were shining quite brightly.

It won’t be long now until i’m out with the tripod, I reckon. It will be the cue to be taking more photos of the night so I’ll have to learn how to use THE NIKON D500 with the delay action shutter.

This morning, much to everyone’s surprise, including my own, I was out of bed before the third alarm went off. Sitting on the edge of the bed in a dazed condition trying to gather my wits together in order to stand up and do something constructive.

I’d been on my travels too. I was out with Nerina again last night. We were looking at a couple of houses that she’d seen on the internet that she was interested in buying. They were round about the £76,000 £78,000 mark in Crewe and were semi-detached but of the smaller type. There was one that was particularly nice and she was looking at it. We found to our surprise that it had three bedrooms which was already something. There was a load of stuff included in the sale, including four kiddies’ bikes and a couple of kiddies’ scooters. She was wondering about those – going to make sure that they were written in the sale. I said “basically if they are there you make sure that they are written in”. She asked “what do you think I’m going to do with a kiddie’s bike?”. There was a pregnant pause as I was trying to work out whether or not I ought to tell her that I knew that she’d had a child or something like that. We had a good look at this house and it looked to be really good value for what it was, one of these 1920s types of small semi-detached houses the type that you would see around Bedford Street, that area, with a drive and a garage. There was a van parked there, like a Ford Escort van only a little bigger parked outside the garage door.
Had I not awoken with a severe attack of cramp at this particular moment, I wonder where this would have gone.
Somewhat later I was teaching some Russian girls gymnastics in the water. It was an established class but it had been allowed to go to rack and ruin, people forgetting to bring their gym clothes with them, forgetting this, forgetting that. I decided that we would have a tidying up of discipline so as soon as the girls came in I made them perform their handstands for me in the water in their uniform, and if they didn’t have their uniform with them they were to go home and fetch it. If they didn’t have a uniform they weren’t to come back until they had one. There were a few other things as well that I wanted cutting out as well. it provoked quite a few sullen disputes but I was insistent on doing this. And I was well on my way to doing it when the first alarm went off.

Once again there was much more to it all than this but as you are probably eating your meal right now, I’ll spare you the miserable details. 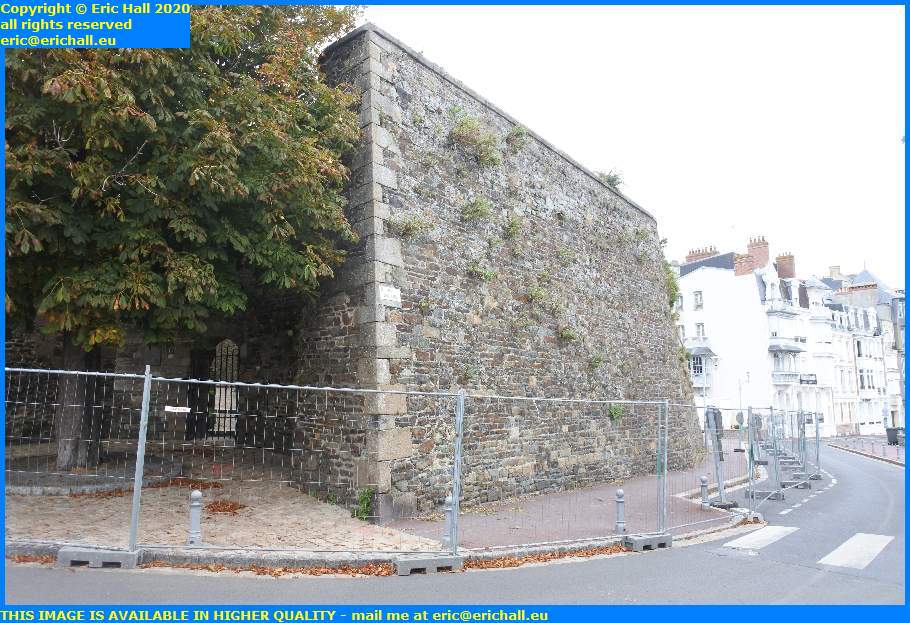 After my shower I went out to go to the shops.

Regular readers of this rubbish will recall the other day that we saw part of the Rue Des Juifs fenced off, and I said that I’d go down and see what was going on.

And as luck would have it, there was a notice on the fencing. Basically, there is an archaeological survey going on right now involving the building and grounds in which the museum is situated.

They seem to think that it dates back to the founding of Granville and the building of the fortifications by the English during the Hundred Years War.

Myy walk up to LIDL was pretty uneventful but I spent quite a lot of money in there, even though there wasn’t anything particular extra that I bought, except for a set of compasses thet I need for measuring precise distances.

And not only that, some of the stuff that I wanted wasn’t available either, so it’s on the list for Saturday and LeClerc. 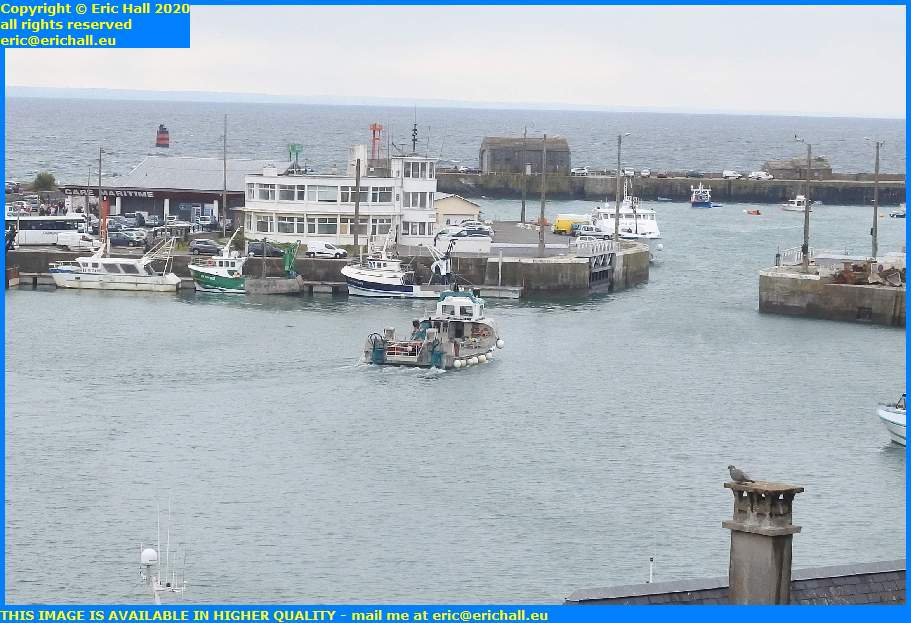 On the way back, my load was rather heavy and it was a struggle up the hill, that’s for sure.

And as I stopped for breath at the viewpoint overlooking the harbour, La Grande Ancre set sail out of her berth and out of the harbour.

So having recovered my breath I carried on back here. I was too tired to unpack the shopping though. I sat down on my chair and that was that until 13:30. About 2 hours, I reckon that i was right out of it altogether, and it felt like it too.

After lunch there was some more paperwork to do and then I went out for my afternoon walk. 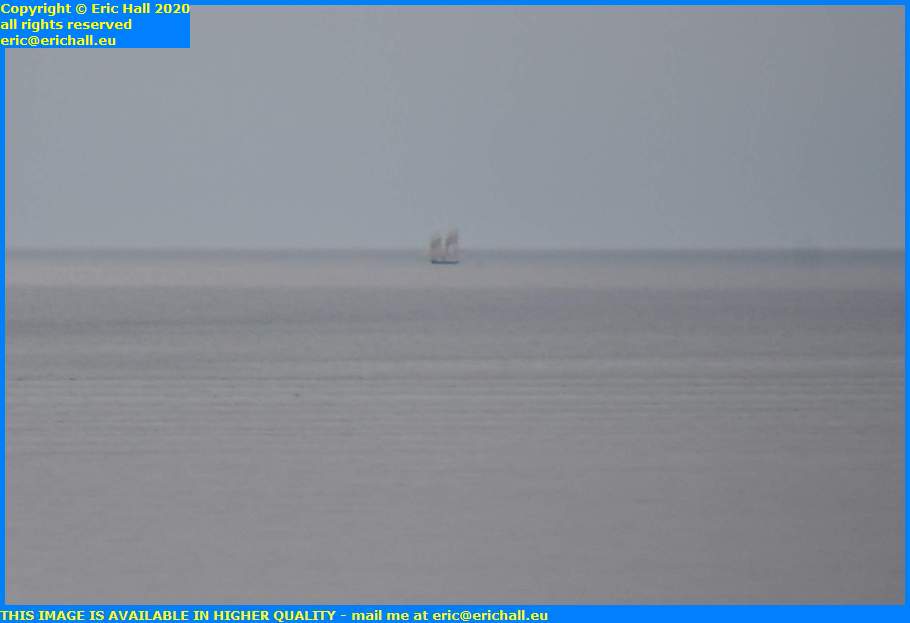 There were plenty of people out there today but as far as photography went, there was nothing particular going on at all.

What there was though was some kind of yacht out there just off the coast of the Ile de Chausey. That looked interesting to I took a photo of it for future reference.

My walk carried on around the headland rather aimlessly and then I came back here.

At my desk I cropped and enlarged the photo that I had just taken. It looks as if it has the same kind of sails and rigging as a boat like la Granvillaise or her sister across the bay, but there is another yacht with a similar rig that sails around here occasionally and it might be her.

After my slice of banana bread, I had a go at the photos from my trip around Europe. I didn’t do too many of those because much of the time was spent doing some research into some of the items that I had photographed.

At 18:00 I knocked off and had an hour on the guitars. And I do like my new acoustic guitar.

Tea tonight was taco rolls with the leftover stuffing, with rice and vegetables followed by rice pudding 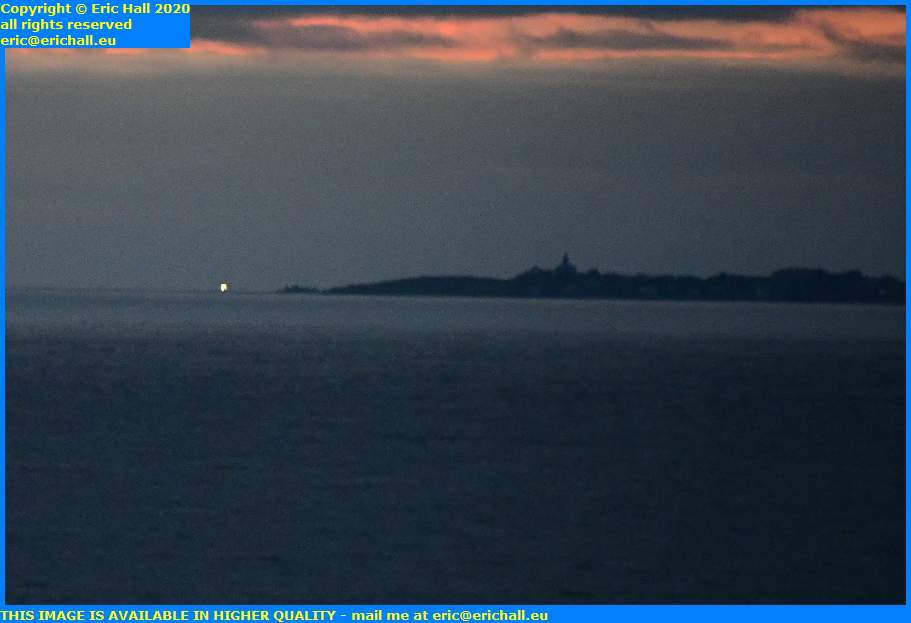 For my evening walk today, I went for my trip around the walls.

Looking over towards the Ile de Chausey, I could see a light shining just offshore, not too far away from where that strange yacht was moored this afternoon.

Of course I can’t say that it’s the same boat, but whoever it is seems to be bedded down for the night over there.

A strange cat came up to me tonight for a stroke, and then I set off on my run along the footpath. 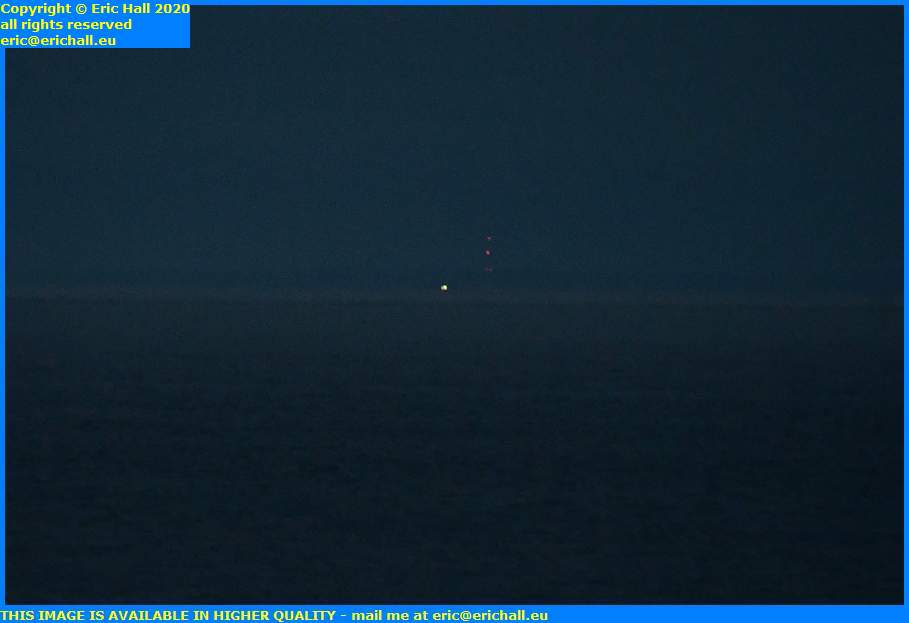 This took me to the viewpoint from where there’s a good view over towards Jersey and the Channel Islands.

The view was really good tonight and we can see the light of some kind of boat – probably a fishing boat – working just offshore. What else we can see is a series of red lights just to the right of the white light.

You probably can’t see it in this photo but in an enlarged photo you can see that it’s actually the warning lights on the big radio mast that we have seen in photos of Jersey taken during the day.

Before I went home I did another couple of runs. One across the Square Maurice Marland and the other one down the hill back home. The three runs in total work out at about 850 paces, which equates to about 500 metres.

So now I’m going to have an early night, as much as I can. I’m not going anywhere tomorrow so I’m hoping that I can have a good sleep and then a good day doing a pile of work.

It’s about time too. I’m just falling farther and farther behind.