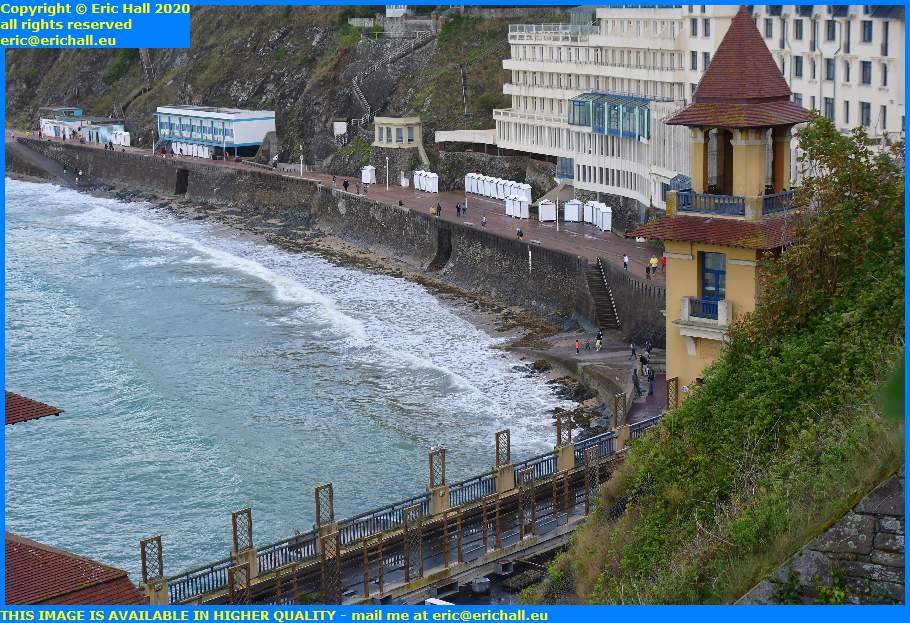 … too many people on the beach today when I went out for my afternoon walk.

And that’s hardly surprising – and for several reasons too.

Firstly, the tide was well in, as you can see. In fact it wasn’t far off being high tide – although I suspect that the tide was on its way out just now.

Secondly, the weather was pretty miserable too. There was a very high wind, it was cold and there were occasional rain showers. I actually had a jacket on when I went outside and I can’t say that it was unnecessary.

This morning though was another miserable morning. The alarms, although I heard them, didn’t raise me from my bed. It was about 07:15 when I finally arose.

Nothing on the dictaphone either, although I have a vague memory of being somewhere in Portugal with a dog during the night. And if that’s as ever likely.

This morning, with a great deal of effort, I managed to complete the radio programme that I had been preparing. And that was more difficult than it might seem as well because the timings were all miles out and I had to improvise.

Unbelievably, that took me up to lunchtime. And seeing as I had forgotten to bake any bread this morning I had to make do with taco rolls. It’s a good job that I have a stock of those.

This afternoon I’ve spent working on the photos from my trip around Europe. Not that I’ve gone very far with those because firstly I had my route into the Czech Republic all wrong and I had to spend an hour or two going over one of these satellite imaging sites to see if I could identify anything.

Once I’d done that, I managed to trace and old abandoned building that I had seen. Once I’d identified it I was able to do some research about it and in the end I managed to find (in Czech) some information about it.

Czech was not a language that I learnt – they didn’t join the EU until after I had left – so I ended up having to teach myself a little Czech vocabulary in order to work out what it was that I was reading.

Mind you, it took me long enough. 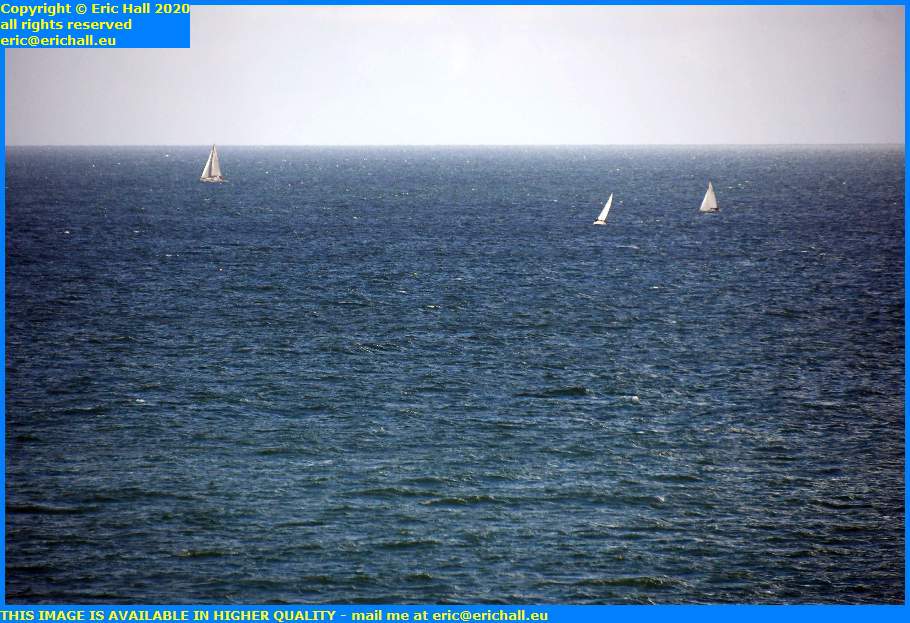 In between all of this I braved the weather to go out for my afternoon walk.

There was plenty of wind, as I said earlier, but it’s an ill-wind that doesn’t blow anyone any good because there were certainly plenty of people taking advantage of it.

Not only did we have the yacht schools out there today, there was probably a dozen or so of them performing some kind of nautical danse macabre out at sea in the English Channel. 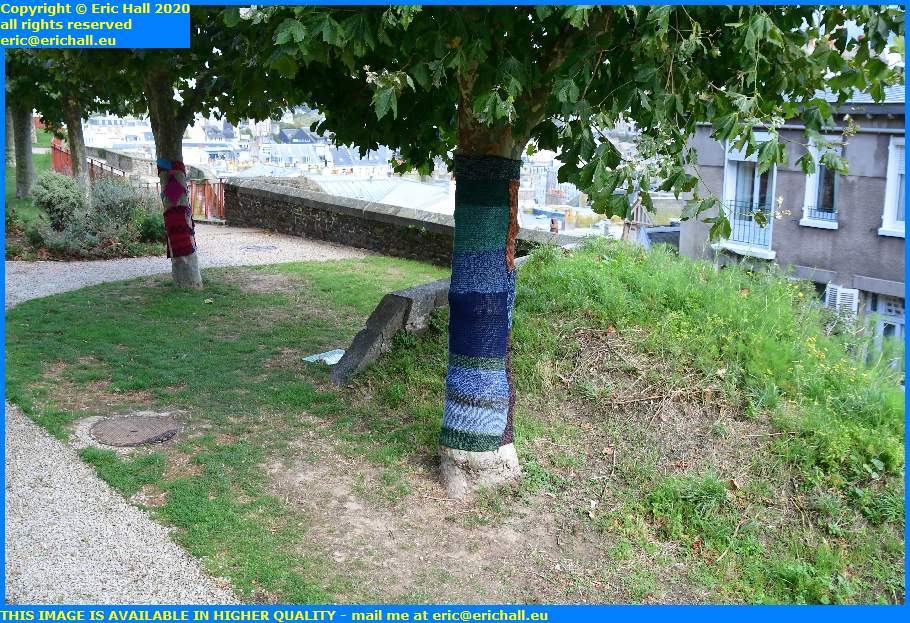 From the rue du Nord I carried on to the viewpoint overlooking the Plat Gousset to watch the high tide, and then I walked around to the Square Maurice Marland to see what was going on there.

Not a lot, as it happened, but it was amusing to see what was going on with some of the trees there.

There was no indication at all to suggest what was the purpose of these woollen wrappings around the trunks. It beats me – after all, it’s not as if it is winter yet – but there must be some kind of purpose to it all. 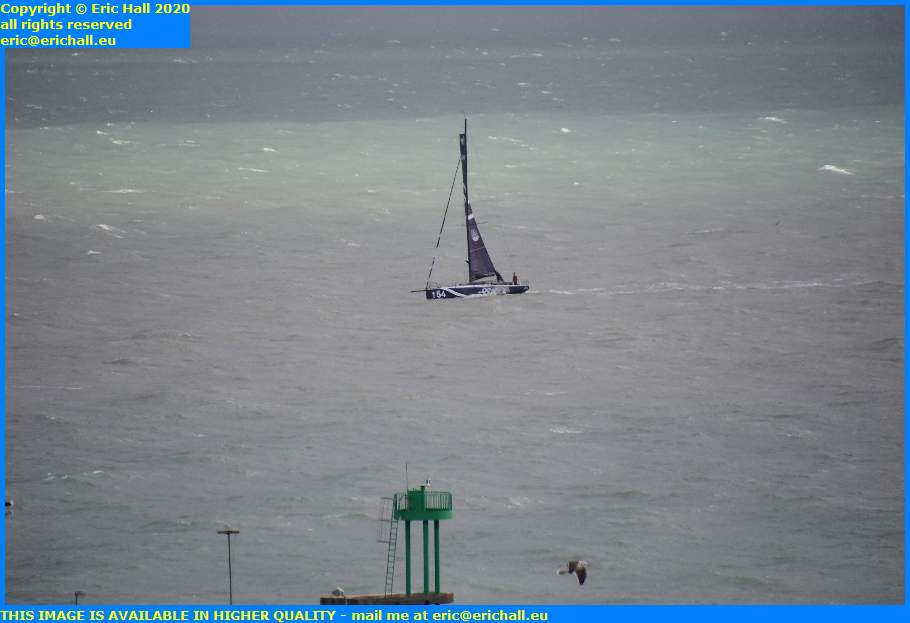 We’ve seen plenty of yachts out in the English Channel, but there were also quite a few on the other side of the headland in the Baie de Mont St Michel.

Regular readers of this rubbish will have seen this one before. It’s Black Mamba and she put in an appearance a few weeks before I went off on my travels on Spirit of Conrad.

She’s been hanging around now ever since, and one of these days I shall have to go along and chat to the skipper to find out some more about the vessel. 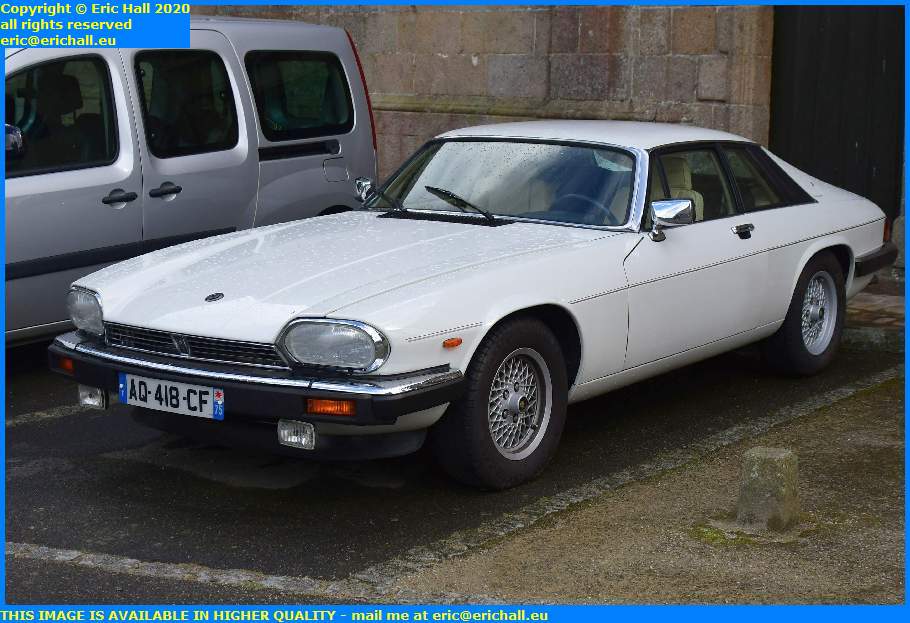 How long is it since we’ve had an old car on these pages?

Round by the Eglise Notre Dame I saw this vehicle parked up. Regular readers of this rubbish will recall that we have seen several old jaguars around the town, but we’ve not seen anything as rare as this old Jaguar XJ-S

It’s difficult to tell whether this is a Mark I or a Mark III. The side repeaters on the Mark III are different but on the Mark I it didn’t have them.

That makes me think that it’s a mark I with aftermarket repeaters, but that’s just a wild guess. Whatever it is, it’s certainly interesting.

Back here I carried on with my photos and then stopped for tea. There was some stuffing left from my pepper so I lengthened it with some kidney beans and had more taco rolls, followed by apple crumble

My evening walk was completely uneventful. There was no-one about in this wicked wind and there was nothing whatever going on. The only excitement was that there were still seven boats in the chantier navale.

Shopping tomorrow so i’m having an early night – I hope. And I need it too because I’m exhausted. Here’s hoping that tomorrow will be somewhat better.