… why I didn’t like being here in the month of August.

There was a headline in the local newspaper today about “incivilities by the tourists” and having spent a lot of time outside today and having witnessed enough incivilities to last me a lifetime, I can see what they mean.

Interestingly, the incivilities were almost exclusively committed by either British people or Parisians and none of that should come as any surprise to anyone.

Last night was something of a disaster. As I said, I was still up and about long after 03:00 but I must have gone to bed soon after because I awoke again about an hour or so later – at 05:20 or so – covered in sweat having had another nightmare.

And what a nightmare this turned out to be, all to do with spies and Berlin and the Cold War. Some people who had broken into a house where I was staying. One of the girls who was living there confronted these people and didn’t seem to realise that they were evil but Government members. She telephoned her father to say that there were some people breaking in so I picked up the phone and told him to get down here pretty quickly. There was an enormous fight between me and a couple of people on my side and these people who had been breaking in, cheered on by a couple of spectators. It was a vicious horrible fight with absolutely no holds barred. In the end we ended up beating these intruders to a pulp and I do mean that. This girl’s father arrived. He worked for the Government. he said “You realise of course that although you are right you can’t go back to the Government now”. I said “we’re proud of your resolution”. We had to get washed and ready to leave East Berlin. Somewhere in this we’d been walking around trying to work out an escape plan out of – or into – Berlin. It involved walking around this industrial area which then led onto some old abandoned railway embankment across a patch of green in the middle of the city. We had to go down to the farmhouse that was there to make arrangements to receive whoever it was that was coming over. But all of that was there in somewhere too. During this walk we were being followed and having to slip between patrols of police, that kind of thing. This violent scene was right at the end, presumably something to do with our ring of people smuggling or whatever it was being broken, I dunno. But this nightmare was so thorough that I couldn’t go back to sleep after that for quite some time. It’s really been a bad night for me.

The alarms went off as usual but I didn’t care. It was 09:00 when I finally awoke and that was something of a surprise too seeing how late and how disturbed the night had been.

No breakfast of course because I’m still not feeling that well, but I put a machine-load of washing on the go and then went off to the shops.

LIDL was first and I spent quite a lot of money in there too. There was nothing special either – just the usual stuff. But as I haven’t been shopping for quite some time and the supplies were run down it was quite a lot of usual stuff too.

At NOZ I didn’t spent very much. Most of it was on vegan ice-cream which was on special offer. There’s quite a bit now in my freezer and I don’t use it all that often, but it wasn’t anything that I ought to be passing by when it’s available.

LeClerc was disappointing in that my frozen chopped spinach wasn’t available. I had to buy frozen leaves and that’s not the same.

While I was travelling from LIDL to the top end of town I was following a British-registered Volvo. We went around three roundabouts, four left turns and a couple of right turns (across the traffic) and yet there was not one turn indicator signal from the Volvo.

Back here, the fridge needed cleaning and defrosting so I emptied it and switched it off to let it defrost.

After lunch I carried on with the defrosting and organised the fridge once again. Now there is no build-up of ice (for the moment) and we’ll see how it goes. 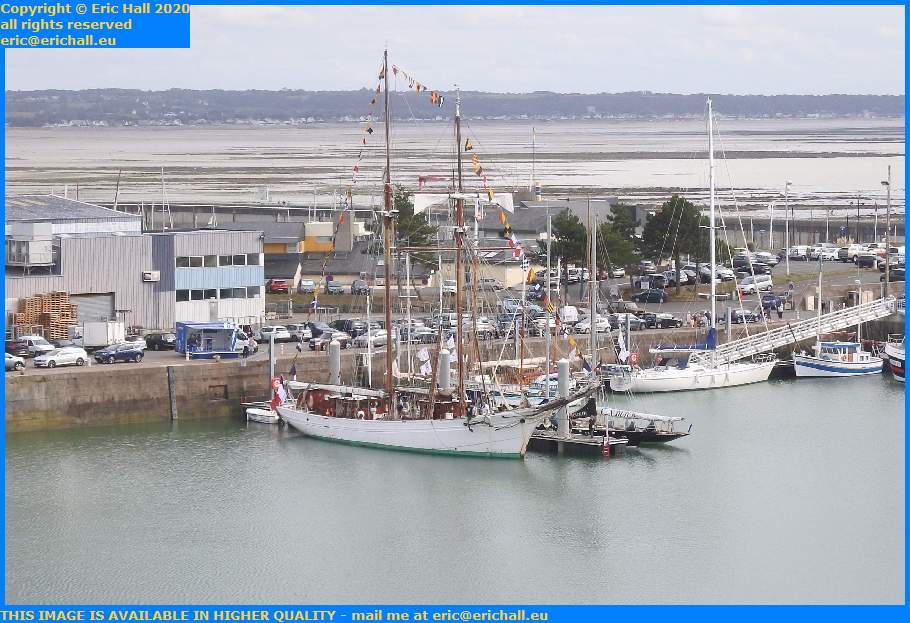 Later on I went out to the football. However I didn’t go very far before I was interrupted.

There was a large sailing ship moored against one of the new pontoons here. At first I thought that it might have been Marité having been moved from her usual berth but counting the masts, I came to the conclusion quite rapidly that it wasn’t.

Marité has three masts whereas this one only has two. It’s probably La Belle Poule, the French navy’s sail training ship that’s been around here for the last few days on a courtesy visit. 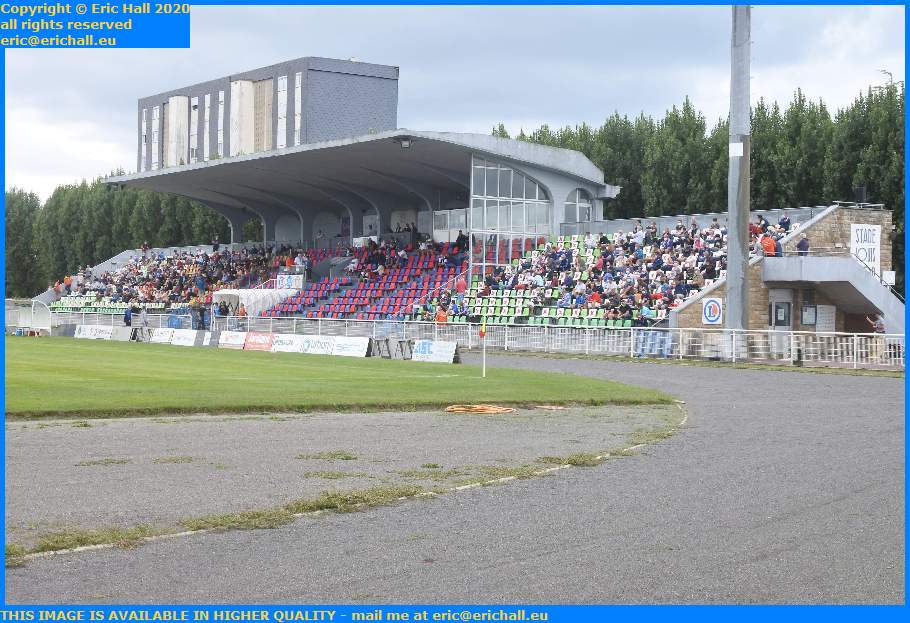 Eventually I arrived at the Stade Louis Dior. The football season has restarted and crowds are being admitted again, but it’s not quite that simple.

And quite right too. This virus doesn’t take prisoners and it’s too lethal to play pot luck with it. 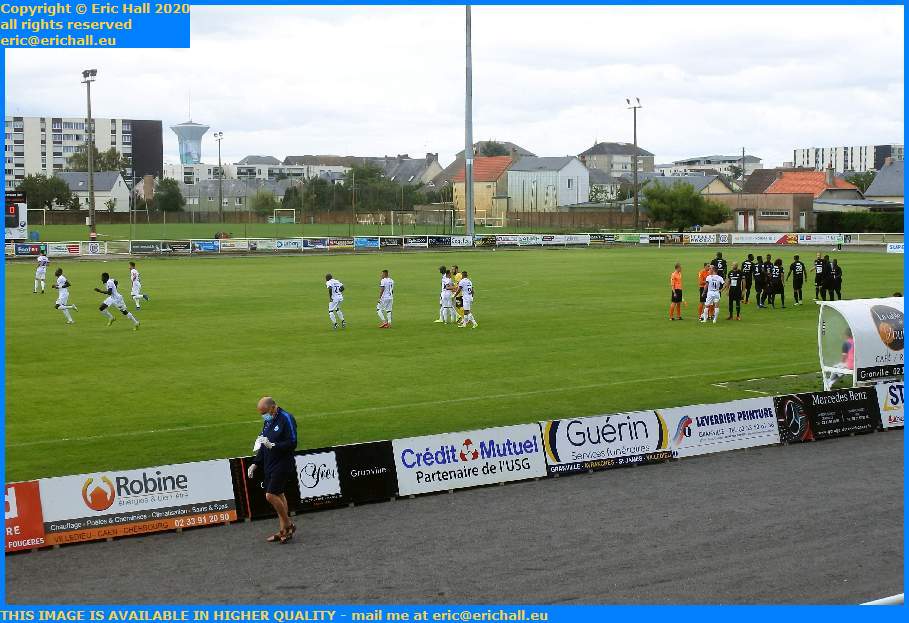 As for the football, Granville, with an almost completely new team kicked off against Sainte Geneviève Sports.

For the first 15 minutes it was all one-way traffic towards the St Geneviève goal but the opposition slowly awoke and we had a much more even game. Granville were pretty ineffective up front – a very lightweight “attack” and the defence were up to their usual tricks as well, lack of concentration and all of that.

Some of St Geneviève’s players were rather spiteful and it was no surprise that they were down to 10 men after an hour.

And Granville brought on a substitute – a Gaudaloupe international winger they had just signed. He was quite a useful player but there was no-one really to take advantage of his good crosses.

However with about 15 minutes to go he put in a good cross to no-one in particular but the keeper, under pressure palmed it away, straight into the path of an onrushing Granville forward who side-footed it into the net. A goal out of nothing after all of the chances that they had missed.

We had a torrential rainstorm for 20 minutes too and we in the crowd were all soaked to the skin.

Tea was out of a tin and pudding was a banana with ice cream.

Sunday tomorrow so a lie in. I’ll need to make the most of it because I’m back to work as of Monday.

But I’m dismayed at the attitude of people and their masks.

I’ve been out and about amongst a lot of people at various times today and so many people just don’t take their masks seriously. Very few people seem to be wearing them correctly.

It’s hardly surprising that there’s a resurgence of cases here. This virus won’t ever go away at this rate.