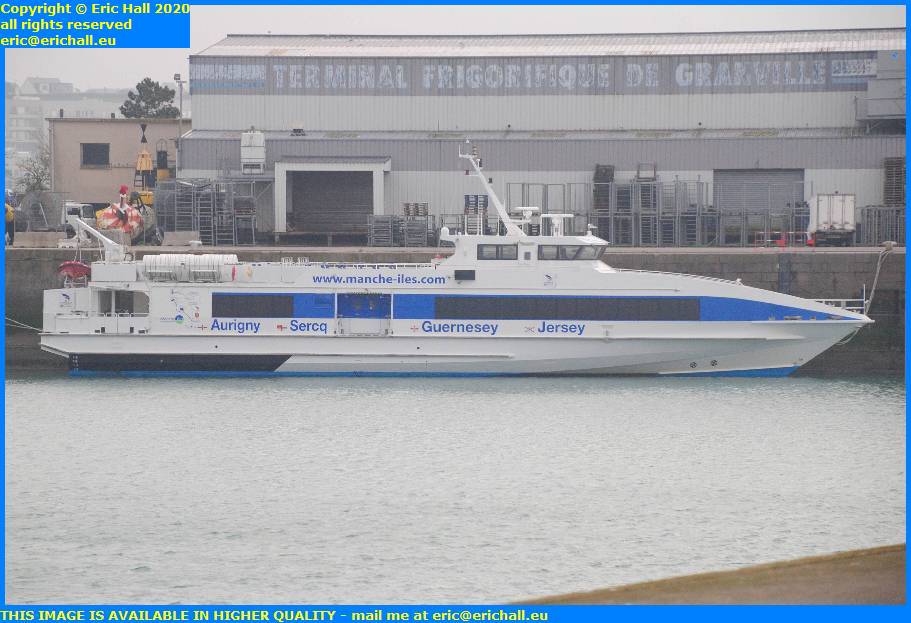 … out and about this morning.

And I’m not the only one out and about either. Sneaking into the harbour unawares under cover of darkness presumably has come Granville, the more modern ferry that runs the route between here and the Channel Islands.

She was in Cherbourg the last time that I heard anything about her and I imagined that she would be staying there while all of this commotion was going on.

As for me, there wasn’t any commotion at all during the night. I had a shower and then went to bed somewhat earlier than just recently. And there I stayed until the alarms went off.

And for a change, i even beat the third alarm to my feet. That’s rather a rare occurrence these days.

After what remained of the medication, I looked at the dictaphone. I don’t remember very much about last night except that there were a lot of us. We’d decided individually of course that we’d go for a walk on our own but we all ended up at the same time on the beach. We were having to walk up and down the beach on our own but with big crowds of people.

Breakfast was next and then I had a look at some audio file-splitting. One file was very long and complicated and at first I had no idea how to do it conveniently. However, after a little pause for thought, the light went on and I started from the end and worked forwards instead of the other way round.

And it worked a treat too. 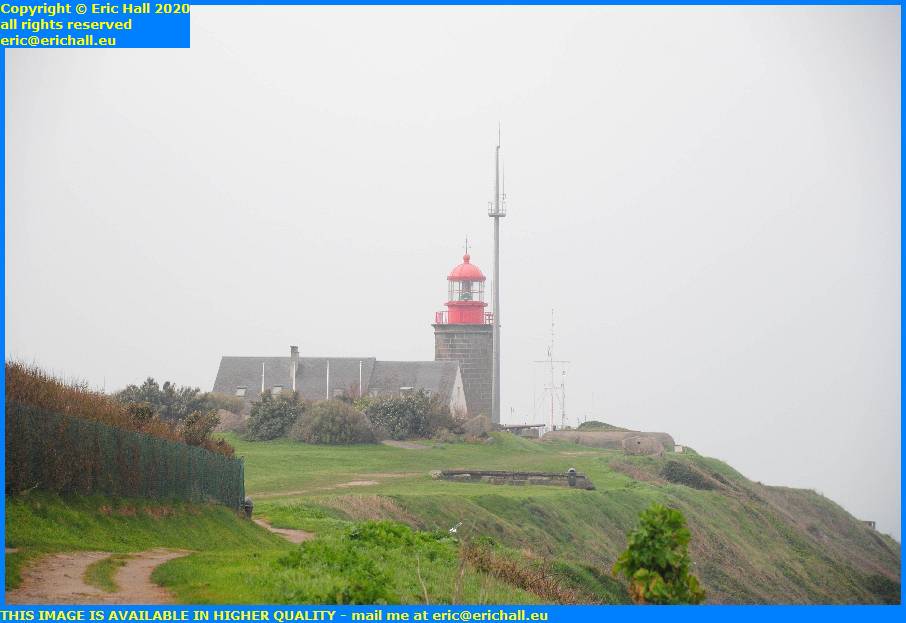 By now it was time for me to go into town to see the doctor.

Not one for this confinement lark, I went the long way round into town, past the lighthouse and the coastguard station on te Pointe du Roc.

And you can see the kind of weather that we were having too. It’s been nice and sunny for the last couple of days but today the weather has broken and we’re in a deep pervading mist that is really uncomfortable. 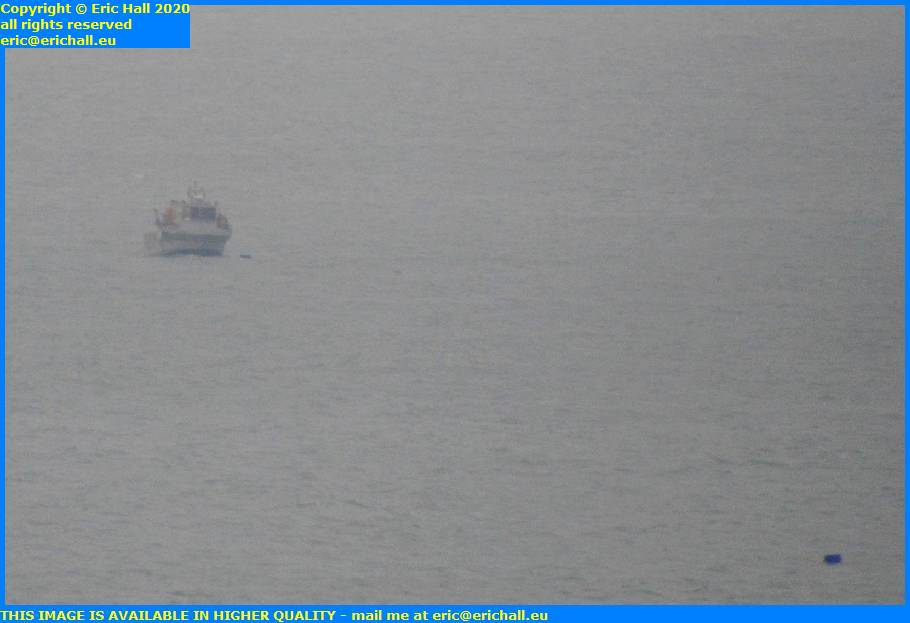 But the work must go on for some people. We can’t all be under detention à domicile otherwise we’d starve to death.

The fishermen are out working, even in the fog. And you will notice that in the vicinity of his boat there are a couple of what look like floats or buoys.

It’s been a mystery to me what these floats and buoys are for because I’ve never seen how they mysteriously turn up in the water. I suppose that this will be the nearest that I’ll ever become to finding out. 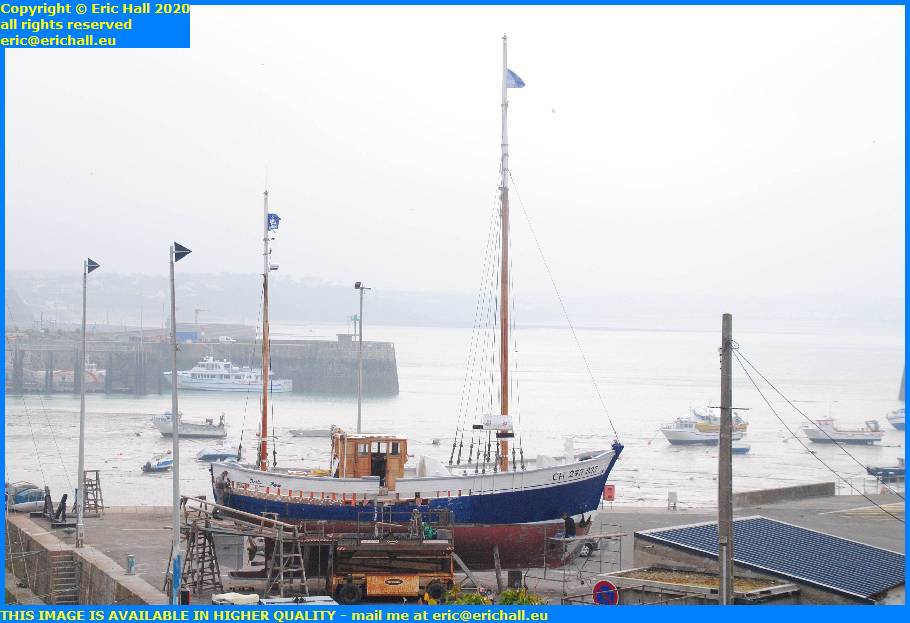 There were a few people around there with face masks but I reckon that’s more to do with the dust that’s being created from the overhauling of Charles Marie. It’ll take more than fear of a virus to keep them from working on that boat, although I imagine that they will be forgetting all about the summer season.

But the fishing boat that was alongside her seems to have gone back into the water, presumably with her repair work finished. 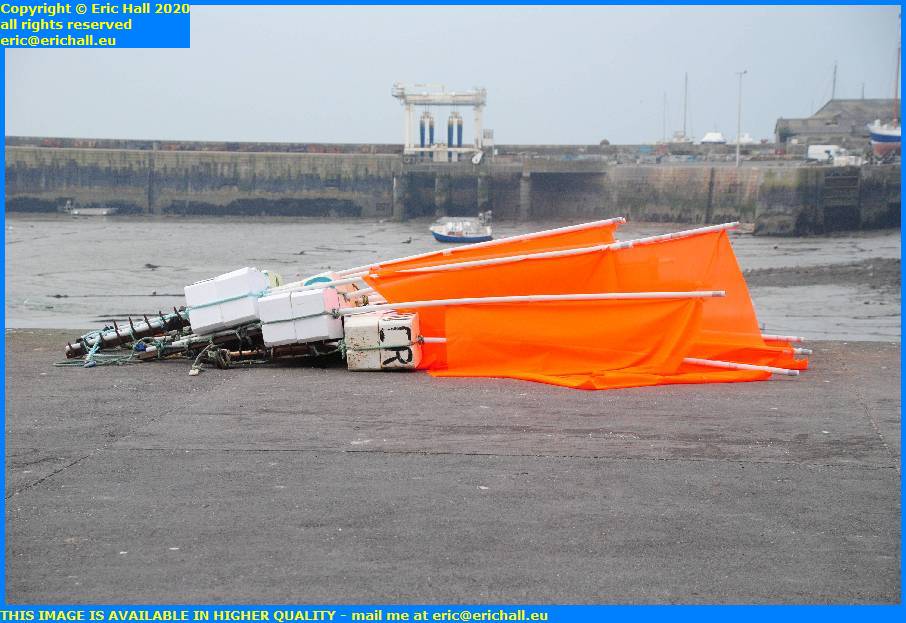 With the tide being out, the harbour gates were closed and I could walk across the path on top to the other side.

But going past the fish processing plant, I noticed these objects here. Something rather more than buoys, they look like channel markers to me

And that’s going to be rather interesting because I wonder what channel they will be marking. But being here by the fish processing plant rather than on the other side of the harbour by the port office would seem to suggest that they are of more importance to the fishermen.

At the doctor’s, he had a couple of students with him. I forgot myself and he was horrified when I went to shake his hand. The two young students were wearing face masks, as was he, but I noticed that one of them had her mask only over her mouth and not over her nose.

That’s something that I’ve noticed with a few people. And I would have thought that covering the nose was just as important as covering the mouth, to be frank.

So what did the doctor say when I told him my miserable tale of woe?

I do have to admit that I would rather have been taken into care in Belgium where at least there would have been access to someone or something that might have been of some help, but there’s no point in worrying about that now.

The thing that surprises me more than anything about all of this is that whenever I want to miss a hospital appointment they give me all kinds of dire warnings about what might happen to me. But they don’t have a problem with cancelling them for four months (it’ll be six months at least by the time that this is all over) when it suits them.

The chemist came up with everything and even made a suggestion about the missing medication. They were all wearing masks and gloves in there, but they didn’t have any to sell to the public as one very disgruntled person in the queue in front of me found out.

Back here I made myself a coffee and then did another pile of file splitting. And I’ve hit a problem with this. One or two of the files are in *.mkv format and there’s something in the recent upgrade to Windows that automatically opens the files onto “standby” so, of course, you can’t delete them. And the more you have in your working directory, the slower the whole “Windows Explorer” procedure goes until the computer hangs up.

Judging by the panic in various chat rooms and forums right now, there are quite a few people affected by this. Here’s hoping that there will be an upgrade sometime soon.

There was a pause for lunch in the middle of all this. The second baguette from Belgium is rather harder than it might be but 20 seconds in the microwave sorted that out.

Later on, when the file-splitting was finished for the day, I started again with the photos for July and my trip to Iceland. I dealt with quite a few but I’m still no further forward because there were such a lot from my walk around Reykjavik.

What didn’t help was that I had a really good … errr … pause during the middle of it all.

For tea tonight, I came across a bag of vegetable and mushroom curry from October 2018. There was slightly more than one portion in there so I lengthened it with fried potato, spinach, peanuts and brussels sprouts and there’s now enough for two nights. I’ll have the second portion tomorrow.

There’s the last of the rice pudding to use tomorrow too, so it looks as if Sunday is going to be a baking day. I bought a new 16cm pie dish in Belgium so I’ll give that a try-out, I reckon.

No stopping my evening walk either. Round the walls as usual and I managed my two runs – the first into the teeth of a gale and that was difficult, but as for the second I could have even made it up the second ramp had someone wit his dog not come round the corner just at the wrong time.

So now I’m having an early night tonight. Shopping tomorrow and that will be exciting as I’m expecting the hordes to be out and the shops stripped bare of food supplies.

My usual choices of meals – lentils, kidney beans, chick peas etc – are not usually the type that most people go for so I’m luckier than most in this respect but it will be difficult, I imagine, finding fresh fruit and veg . But we shall see what we shall see.

So now I’m off to bed. See you in the morning.