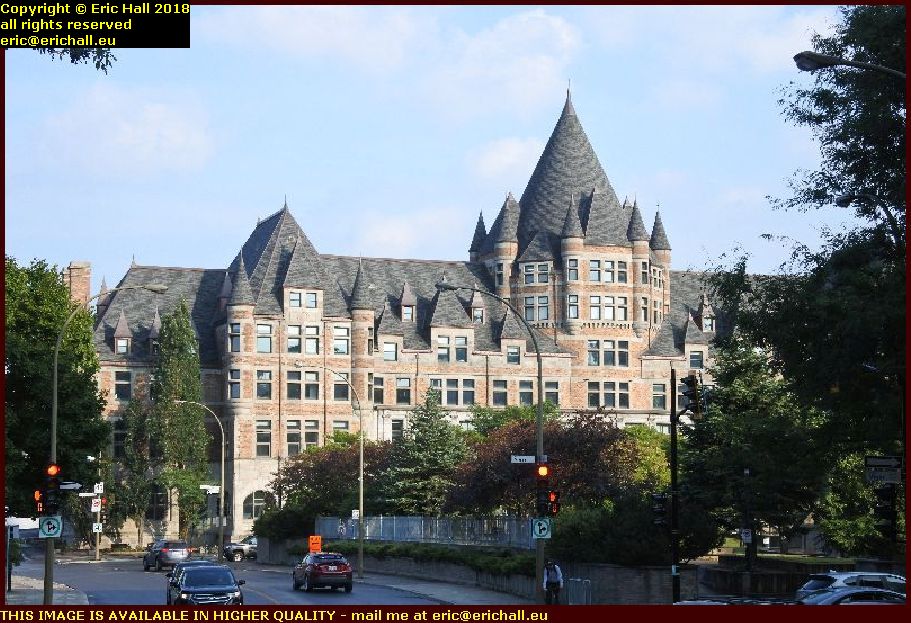 … for guessing where I am when you see this beautiful building, are there?

A place on this morning’s flight from Brussels to Montreal miraculously freed when a passenger was declined boarding due to incorrect paperwork (this new visa system is causing chaos) and so I was bundled aboard.

and you won’t have much more luck than that, will you?

And what was even more surprising was that I actually made it out of bed at 05:30 too. I must be improving!

First off was the medication. That’s important. And then to start the packing. It didn’t take long to do that and so a shower and good scrub was next.

Breakfast was the rest of the orange juice from last night, a mug of coffee (having those little tubes of coffee in my travel pouch is really a good idea) and one of those cheese baps that I made last night too.

Taking my leave of the hotel staff I hit the streets to the station and bought my ticket for the airport. There was an announcement that there was a train ready to leave so I made it up onto the platform where there was a Nederlands Spoorwegen train for Den Haag. I’ve never been on a Dutch train before so this was another new experience.

The airport was the usual chaos. I’m booked on a Brussels Airlines flight – SN Brussels Airlines, the successor to the legendary SABENA, or “Such A Bad Experience – Never Again!” and that’s enough to give anyone the collywobbles when flying the Atlantic.

But when I presented myself at the check-in, they denied that there was such a flight. After much binding in the marsh I discovered that it was a code share and the flight was organised by Air Canada.

A big sigh of relief. 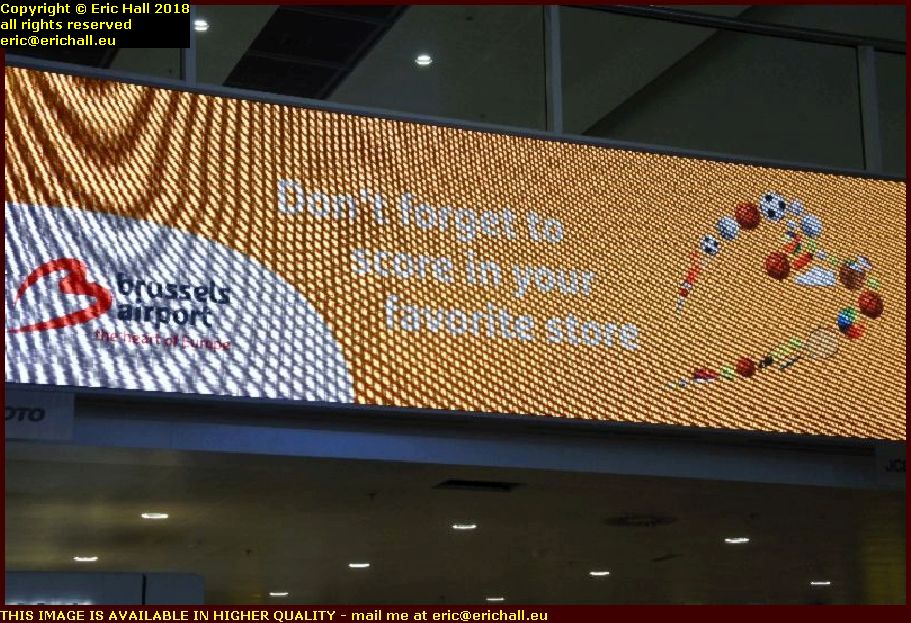 At least it gave me plenty of time to admire the adverts on the television screen broadcasting to the waiting masses.

I have to admit that I quite liked this advert. The last time that I tried anything similar though, I was asked to leave the shop. It might be the in thing to do in Flanders, but not anywhere else.

It did remind me of the story that I heard about the alcoholic who saw the advert “Drink Canada Dry” – so he’s on his way.

Eventually they opened the gate and we filed in, and then we had to wait again while the staff at check-in discussed last night’s television programmes, applied their make-up, and squirted perfume under their armpits (and I bet that you think that I am joking too).

But we were soon checked in. No aisle seat for me again, which is a shame, no matter how had I pleaded. Some times, I really am a miserable pleader.

After all that I have said in the past, going through security today was surprisingly painless. Just the odd glitch here and there, with the queues controlled by a woman who had clearly been bullied quite severely as a child and was thus determined to wreak her revenge on everyone else.

The automatic passport reader was fun too. With all of the messing about, it would have been far quicker to have checked them by hand. With all of this totally senseless automation, no wonder that there is rampant unemployment in the Western World. 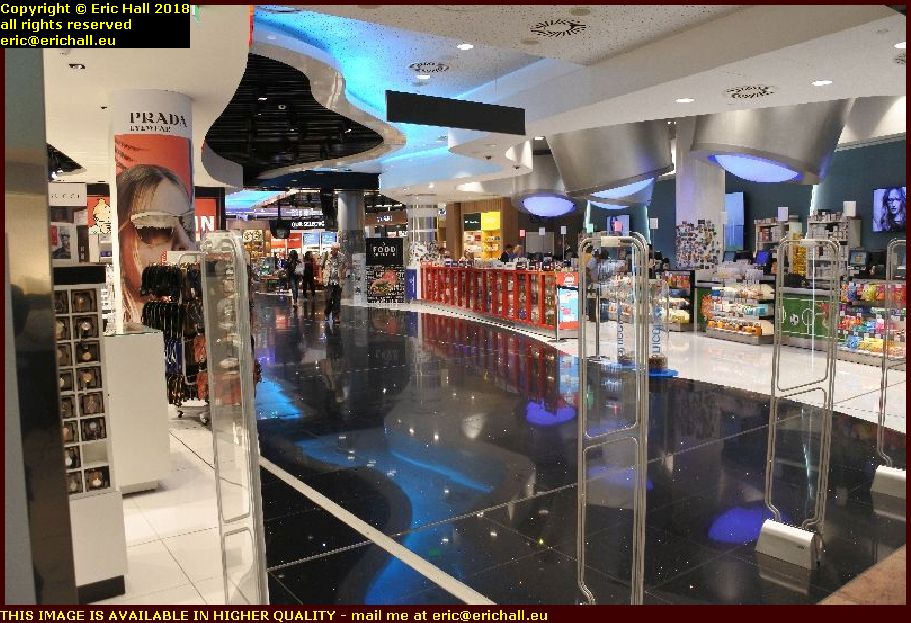 A few years ago I made the point about how at Zurich Airport all of the passengers are directed, once they have gone through all of the formalities, to their gates via the Duty-Free shop.

And with the airport here at Brussels having been substantially modified following the events of 22nd March 2016, this is exactly what happens here these days too.

They never miss an opportunity. 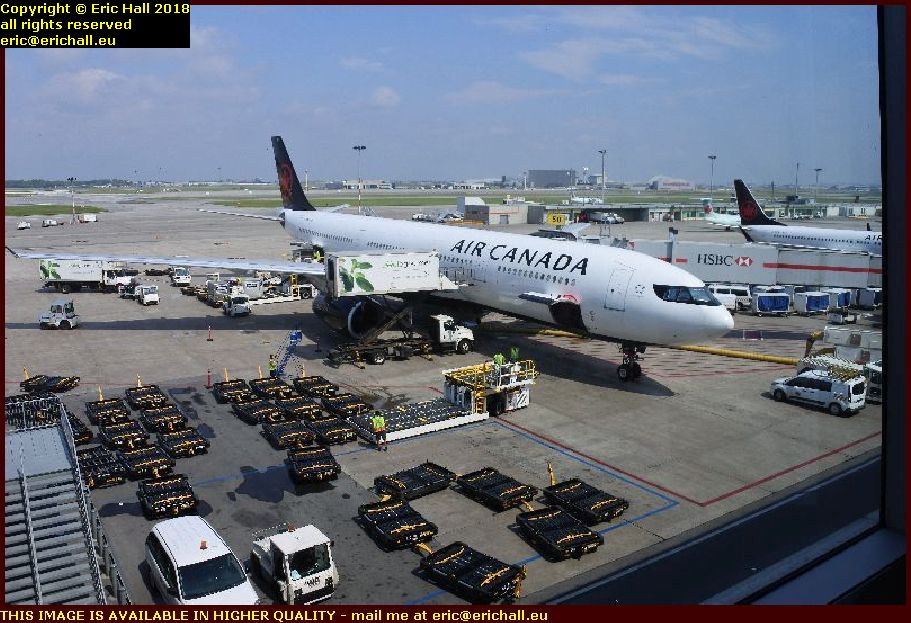 And never mind Air Transat – we were all crammed in here like sardines too and it was really uncomfortable. Not the seats – they were fine – but the lack of room that we had to stretch out.

They even managed a vegan meal for me, which was most impressive and easily the best that I’ve had on a flight. A chick-pea starter followed by a black bean casserole with rice, and an Alpro soya dessert for pudding.

They weren’t very good with the in-flight drinks though and I have a raging thirst these days. But luckily they had one of these charity things in the airport and were selling bottles of water for €1:00. I had bought two just for this kind of emergency.

Another disappointment was the brat. A child of about 3 just a couple of rows away from me who decided to scream for a couple of hours during the flight. King Herod had the right idea, that’s all that I can say.

It stopped me sleeping, but not so the woman sitting next to me (the wife of the man who had been thrown off, hence I know all about the story). She had a good sleep for a couple of hours during the flight, most of it spent reclining against my arm.

She was lucky though. The non-stop turbulence that we had would have been enough to stop me sleeping, had the brat not obliged.

All of the paperwork requirements for entry have been abolished at the airport. Now you fill it all in on an electronic screen, of which there are about 500 in the arrivals lounge.

I imagined that this would take hours, but our fright was the first transatlantic fight to arrive and we were done in minutes. Even the border police were friendly and helpful.

Has there been a revolution in Canada?

The usual 30-minute wait for the baggage (probably because we were through Immigration so quickly) and then out into the airport.

The price of a three-day transport ticket has increased (to $19:00) and you have to pay $6:00 for an oyster card thing. And there’s a new system for the 747 bus to the town, which now takes three times the personnel and three times the wait, with three times as much confusion.

There was a little group of us, two Septics and a young French guy, having a good chat. Mr Septic was telling some real whoppers (much to the chagrin of Mrs Septic who went to sit elsewhere) so I delighted in telling him some real whoppers in return.

I leapt off the bus at Berri-UQAM into the oppressive, clammy heat and headed round the corner to my hotel. My usual one is booked up but the one next door – the Hotel Elegant – had some rooms (I’d checked on the internet in Brussels and booked one) so I went there instead.

It’s a typical “rue St Herbert” hotel – cheap and basic and seen better days – but it’s central. That’s important. If I’m out at an airport hotel or somewhere and overwhelmed by sleep, I can’t get back to crash out.

A shower to cool me off (and to wash my clothes) and a brief crash out for an hour or so, and a chat to Josée, and I was back out again.

The streets were soaking wet too. I thought that it had looked a bit stormy when I arrived, but while I was deep in the arms of Morpheus just now, we must have got the lot. 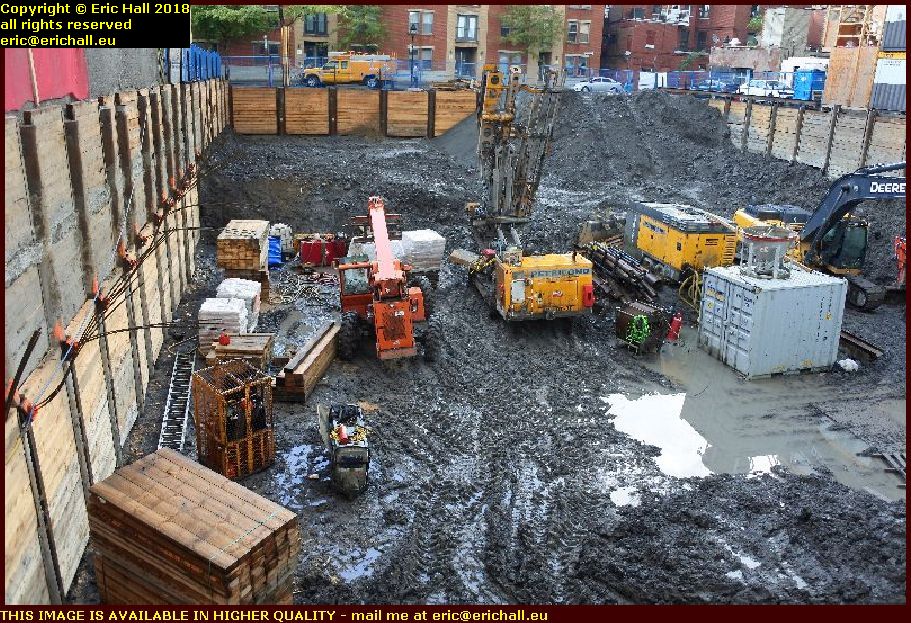 First stop was to buy some root beer of course, but on the way to the IGA supermarket, something that I saw (or rather, didn’t see) made me pull up.

I can’t remember what was here now, but whatever it was has now long-gone and they are digging some immense foundations for something else to rise out of the ashes. 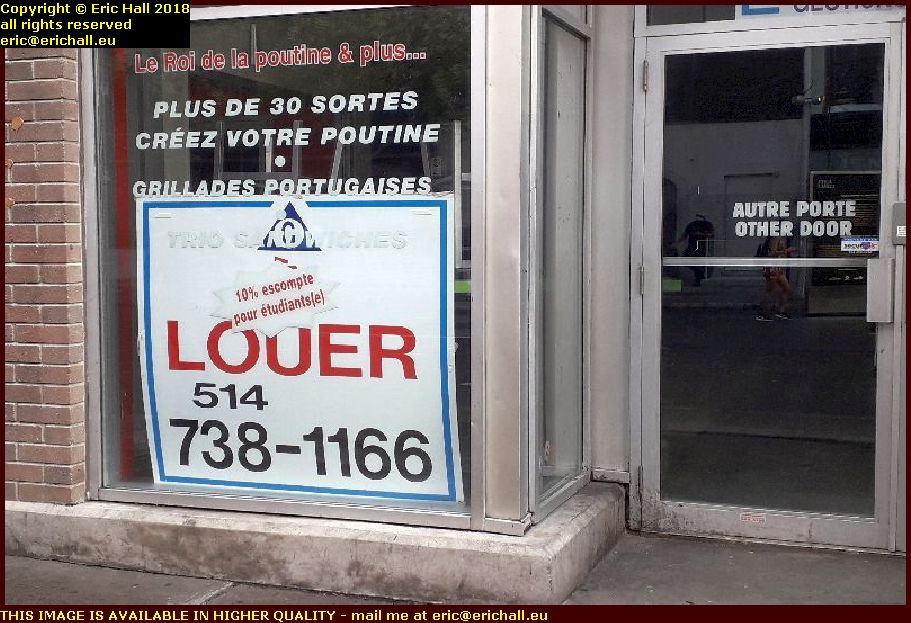 Something else cheered me up too;

I think that Poutine is the most disgusting stuff on the planet. It’s chips with grated cheese on top and all smothered in gravy. And how anyone can eat it I really don’t know.

And so the world-famous place in Montreal that advertises “more than 30 types of poutine – and create your own too” has now closed down and is up for sale.

That’s what I call good news.

Even better news is that next door a Lebanese restaurant has opened. And it sells falafel too. So I won’t have to walk far for tea any more. 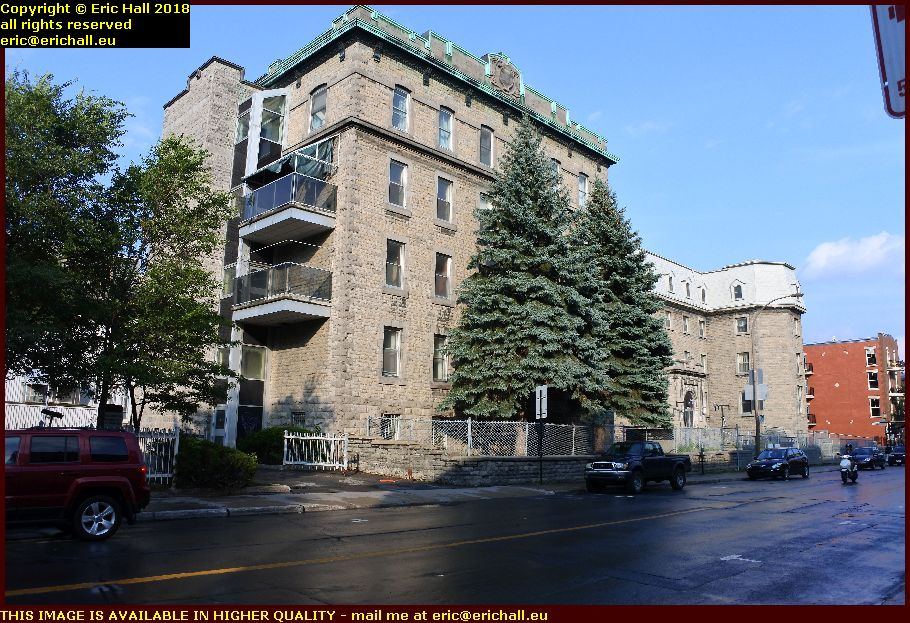 During all the time that I’ve been wandering up and down Montreal, I’m surprised that I’ve never noticed this building before.

It’s on the corner of the Rue St Hubert and the Rue de la Gauchetière, and it’s formerly the Centre Hospitalier Jacques Viger

If you’re thinking, as I am, that it’s a beautiful building, you’ll be pleased to know that it’s on the Register of Historic Places – not that that counts for much. 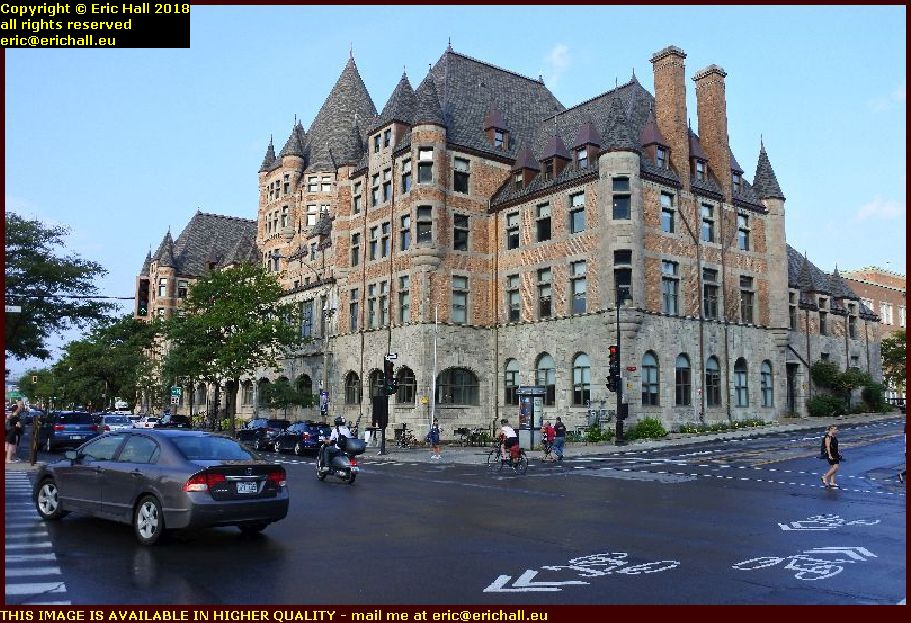 On the subject of historic places, just down the road is, in my opinion, the most beautiful building in Montreal.

This is the famous Gare Viger, built as the flagship railway station for Montreal by Canadian Pacific.

All of the passenger trains from further east used to come here, but overnight the Canadian Pacific hacked off its passenger services east of Montreal and abandoned it to the elements. 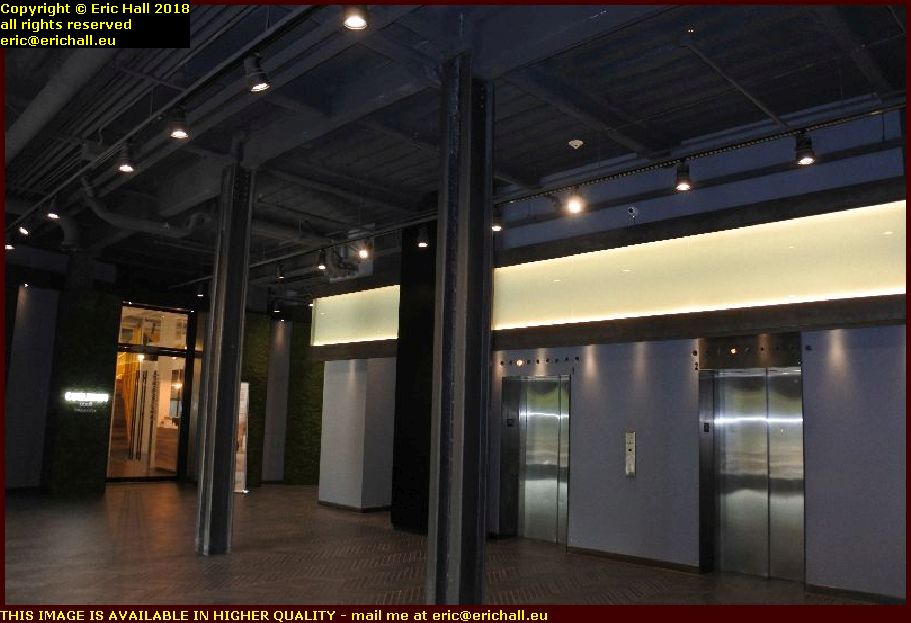 Regular readers of this rubbish will recall that we regularly visited it in its derelict state, and expressed concerns for its future.

However, no need to worry quite yet. It’s been renovated and is being let as offices.

Several tenants seem to have already moved in and there are signs that more are going to follow.

Where do ships go when they are feeling poorly?

That’s right. They go to the doc(K)s.

And here in Montreal we are lucky in that there are loads of docks to visit down on the St Lawrence.

Not as many as there used to be of course, and regular readers of this rubbish will recall having visited a great many abandoned docks with me in the past.

Not much going on in the ones close to hand unfortunately. 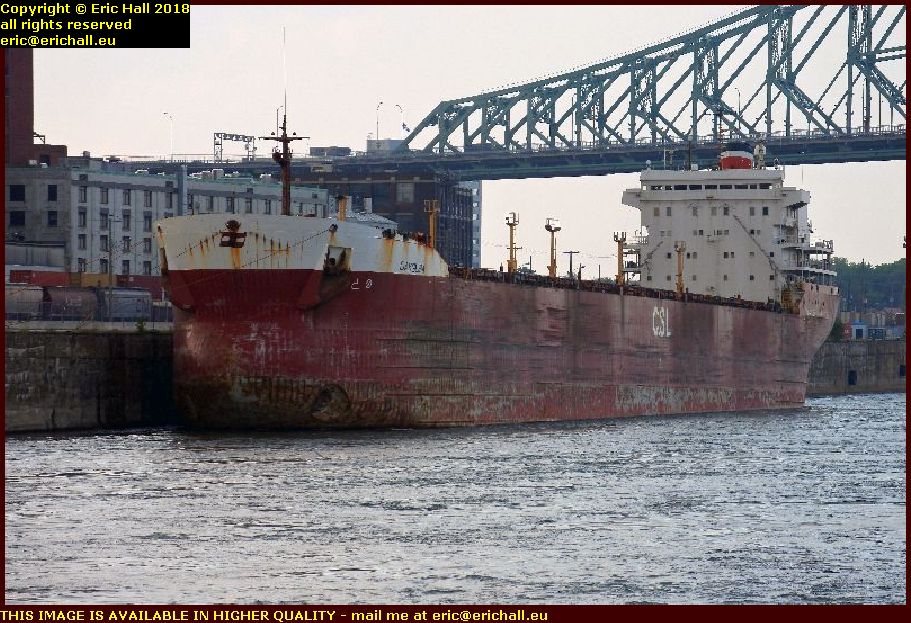 But our old friend Manitoba, moored up in this spot for a couple of years, has gone.

She was moved to Sorel in November last year and he er place has been taken by a very sad and sorry-looking Oakglen – a ship that I am convinced that we’ve seen before but I can’t for the life of me remember when or where.

She’s been here since 1st July and doesn’t look as if she’s going anywhere any time soon. 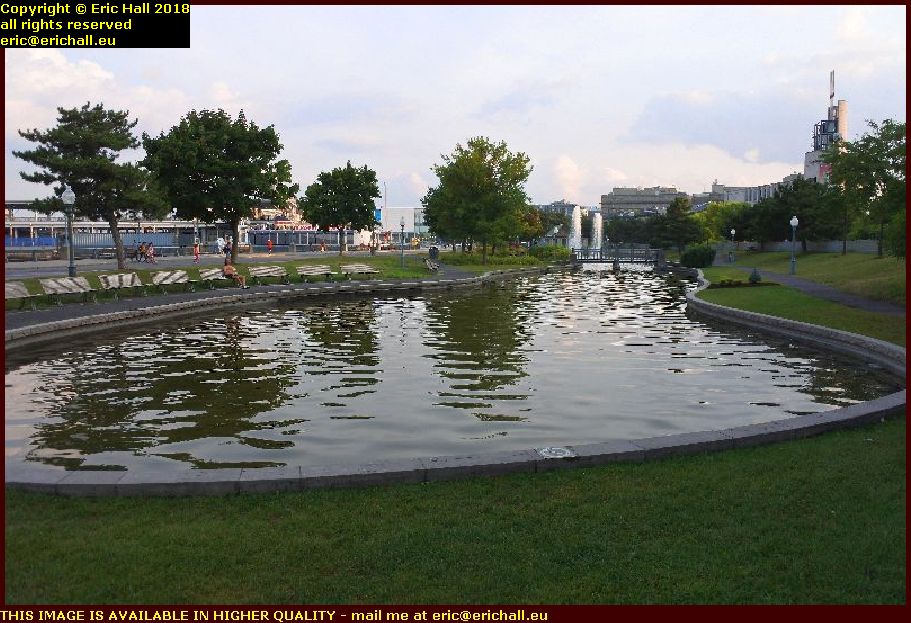 That’s all the excitement that there was in the docks, so I just wandered around and admired the view.

It was getting late by now and I wasn’t feeling hungry. I’d made some butties to eat on the aeroplane if I couldn’t get a meal, and so as not to waste them I’d eaten them in the hotel.

But it’s a long time until breakfast so I went into a fast-food place in the rue St Catherine Est. They didn’t have chips so I had a plate of sweet potatoes. And they were quite nice too.

Back here, it was still early, and still hot too. But that didn’t stop me.

I had another shower (the third of the day and isn’t that a record too?) and crashed out on the bed.