… that I haven’t done for over 10 years. That is – I went to the swimming baths for a swim. I’d done my monthly shop around Montlucon with plenty of time to spare and on the way back I stopped off at Neris-les-Bains where there is a public swimming baths. I’ve been there before during last winter to take my showers there but I really fancied a swim. And I always carry a holdall in the van with some washing stuff, some clean undies, a towel and a pair of trunks.

And of course, as you might expect, it was closed for the week for pool cleaning. 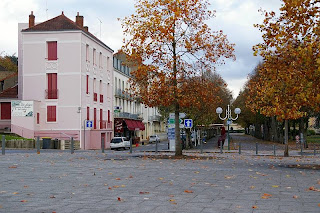 Neris is an old Roman spa town. It’s quite pretty and genteel – the kind of place that you would take your maiden aunt for afternoon tea. There’s a thermal baths there – something along the lines of Malvern – where you can go for a relaxing cure. It’s pretty good for the stress, so they say. So I wandered along to see if they could fix me up with a shower or something, seeing as I was here.

“Actually, we are closing today” said the receptionist.
“When are you reopening?”
“The 27th of March” she replied. You can see that it was my lucky day.
“Can I come without an appointment for a shower or a bath without signing up for a cure?”
“Certainly“
“So how much would that cost?” 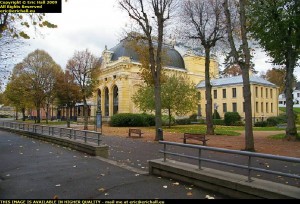 And when she told me the price, I needed to sign up for a cure in order to recover from the shock. Prices start at €53:00. And here I am, complaining about €2:90 for a shower!

She gave me a leaflet with all of the details of the cures that are on offer. One of the things that they propose is a mudbath. Dunno why anyone would expect me to sign up for that – with all of the rain that we have had these last few days I have my own private mudbath just outside the front door. Admittedly it doesn’t have marble walls and floozies handing round the towels, but it doesn’t cost … gulp … €334 either.

Mind you, I do recall the time that I sent Nerina to have a mudpack applied to her face. They reckoned it would improve her appearance.
“Has it worked?” she asked when she came back
“Absolutely” I replied, “but it’s all worn off now“
Mind you, she enjoyed herself while she was having a weekend at this spa. She phoned me up to say that with all the treatments she had had, she was feeling like a new woman.
“So am I” I replied

This evening I went down to Pionsat to watch the 3rd XI play Thuret, but the ground was totally in darkness. You can see that it was my lucky day today! From the top of the hill just round the corner from me I can see right across the valley and I noticed that the floodlights were on at Marcillat’s ground, about 12 km from here so I drove over there instead. Some of Pionsat’s players were there watching Marcillat play Montvicq and they told me that the match had been rearranged for last week and the team had actually won! And I missed it too!

Marcillat play in Allier’s 2nd Division. That’s the same level as Pionsat’s 2nd XI, but the quality of football was probably lower 3rd Division based on Puy-de-Dome standards. Pretty much agricultural stuff. Marcillat won 5-1 (Montvicq’s goal was a Marcillat “own goal”) without breaking sweat, and I don’t think that Montvicq would score if they were still playing now with Marcillat having been off the pitch for the last two hours.

Anyway, tomorrow I’m going to watch the 1st XI at Artonne – I’ve never been there for a match. And that reminds me. I was in Brico Depot today and one of the assistants came over and started chatting to me quite socially.
“Who on earth is this?” I asked myself.
Anyway, after a lengthy discussion he asked “are you coming to watch us tomorrow?” Ahh yes. Pionsat footballer. What with Pionsat FC pie hut attendants working at the Auchan and footballers working at Brico Depot, I can see that I’m going to have to be on my best behaviour everywhere that I go. That’ll be quite a change.