Yes, the temperature when I awoke this morning was at the giddy heights of all of minus 3°C. It wasn’t as cold in here either this morning, but after less than 4 hours sleep, it certainly felt like it too. 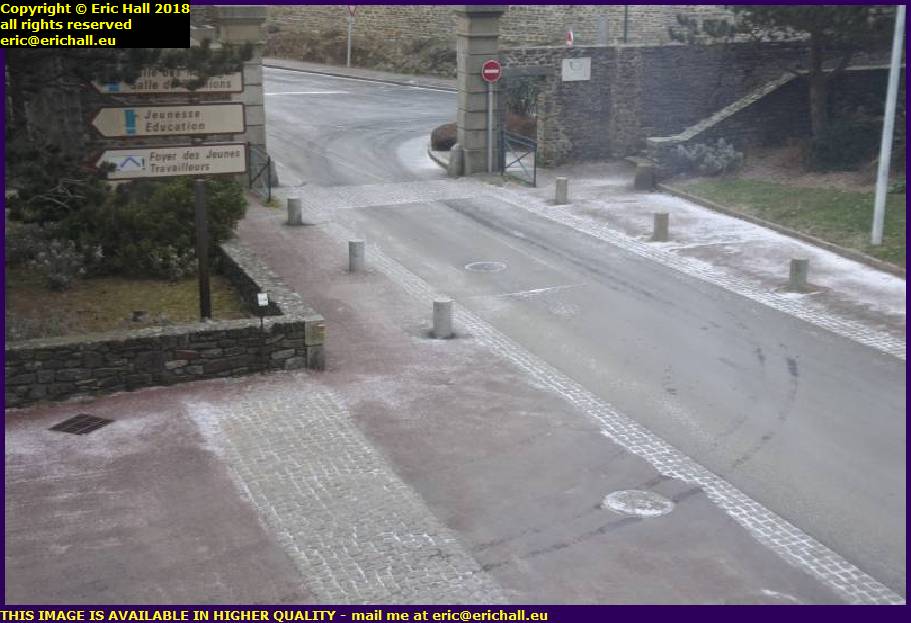 What didn’t help though was that after breakfast it started to snow. I wondered why it had gone completely silent outside, with no cars or pedestrians passing.

Under normal circumstances that would have put paid to any idea that I might have had about going to the shops. These, as regular readers of this rubbish will recall, are not normal times and I need to move about.

And in any case, you wouldn’t exactly call that a snowfall after what we are used to in the Auvergne, regardless of what they might think around here.

So I had a shower and a general clean-up and cut all 20 of my finger and toe nails (and anyone who knew me even a couple of years ago will realise that an achievement that is). And then I hit the streets. 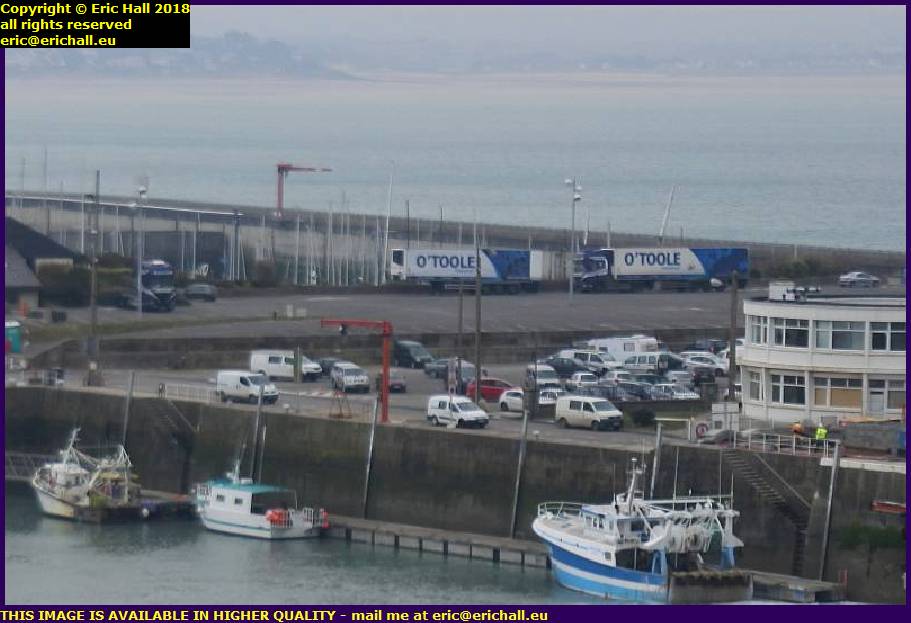 And there over across the far side of the harbour where the fairground people had their residential caravans are a couple of lorries owned by the Irish company O’Toole.

Everyone knows of course that the company is owned by Plenty O’Toole, one of the James Bond girls from Diaminds Are Forever and who was, famously, “named after her father”.

But more to the point, what are they doing there? And even more interestingly, how did they get here? 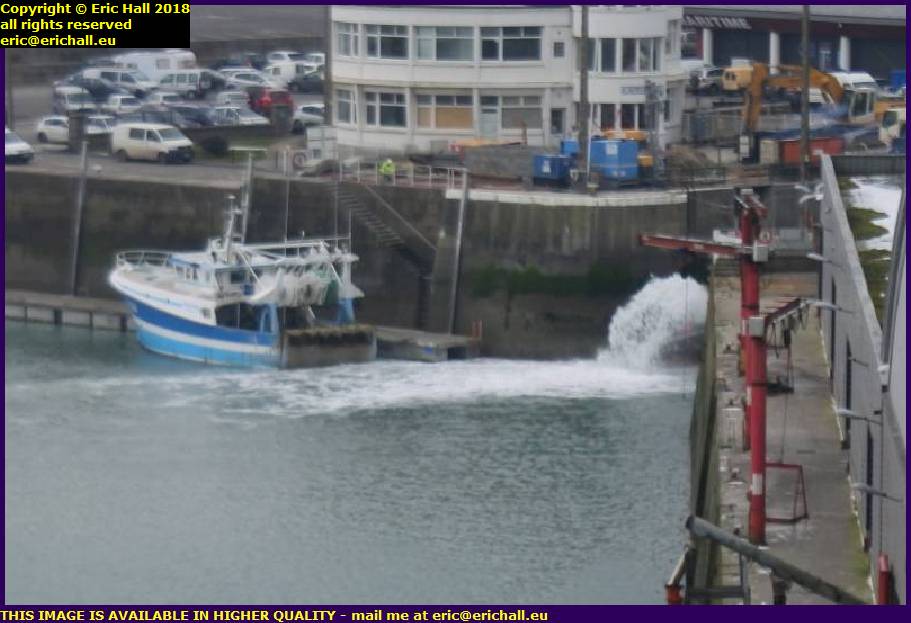 That wasn’t all of the excitement down at the harbour either. As you can see, we have a gusher – a ge flow of water into the basin.

I did wonder what it was doing – whether there had been a leak in the gates or whether they were trying something new, but it seems to be the outlet of a rather large pump and I’ve no idea what it’s supposed to be doing.

Or even where the water is coming from. I mean – I know that it’s coming from the sea, but that’s not what I mean.

We had some excitement in the town too. Someone in a 7.5 tonne lorry was delivering parcels – blocking the narrow streets as he unloaded, even though there was a free space just 20 metres higher up.

And another100 metres further on, he stopped OPPOSITE a free space and blocked the passage for the large queue behind him. So when he came out of th shop I asked him if he needed any help to park it – after all, I now have my HGV licence – but he just gave me a dirty look and drove away.

I made it to LIDL to find that there were no more than 20 people in the sho, and I had a till all to myself – something that deosn’t happen very often in LIDL as you know. Clearly the weather had defeated most people. But there was nothing exciting to buy in there, although the sorbet maker looks exciting – I’ll need Caliburn for that. 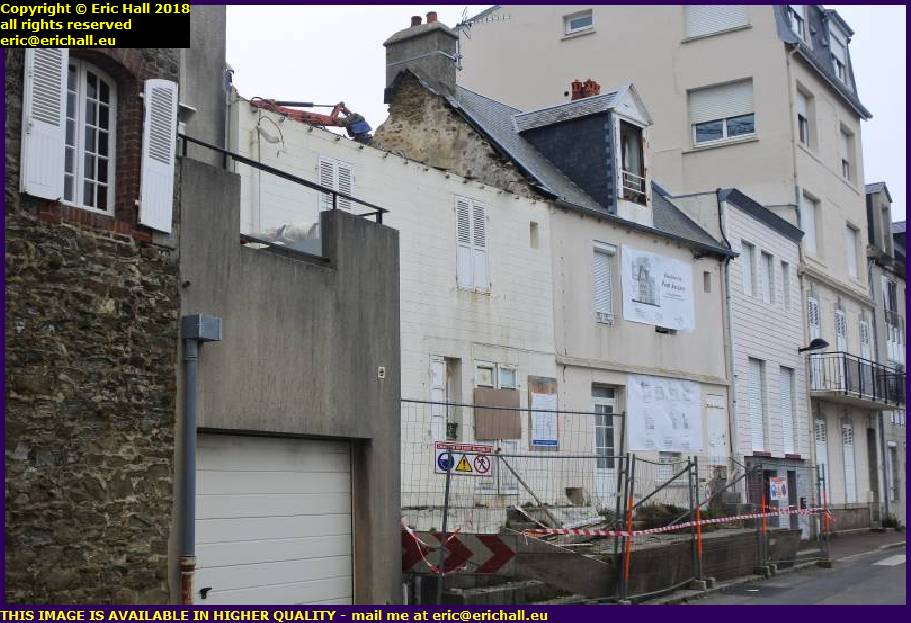 My usual route back home takes me down past the streets in the upper part of town and there was some excitement here too.

It seems that a couple of old houses in the Rue St Gaude are being demolished, with plans afoot to replace them with modern apartments. This is a street with a good view in places over the harbour and in much demand – I saw a ruin here at an exorbitant price – and quite a lot of the old single-occupancy properties have gone.

But I admired them for attacking the job with a digger.

The day warmed up later and we were treated to rain – put the dampers on my two walks later on though, but at least I made well over the 100% daily exercise target which is always good.

And tea tonight was all kinds of vegetables and falafel with a cheese sauce, and that was delicious too.

But despite my short night last night and my exercise today, I’m not at all tired and I don’t know why. It’s going to be yet another late night.